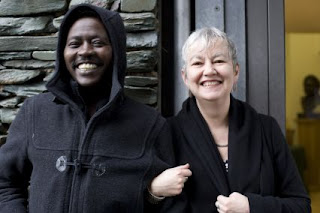 Sarah Maguire, an outstanding London poet and the founder of the Poetry Translation Centre, died at the beginning of November. She had been ill for a few years.

I think it would be presumptuous to say that Sarah and I were friends. We were, however, good acquaintances who were always very happy to see each other and chat at poetry events. The first time I saw her read and briefly met her was at the 2007 TS Eliot Prize readings, when her collection The Pomegranates of Kandahar was nominated (that was when the TS Eliot was still at the small Bloomsbury Theatre). In 2012 I was deeply impressed by the Poetry Translation Centre readings at Poetry Parnassus on London's Southbank, and I started attending the PTC's translation workshops shortly after that, usually a few times per year. This was how I got to know Sarah.

Sarah Maguire was a wonderful poet, one who I feel was very under-recognised. Her poems aren't flashy or zeigeisty, but they are models of restraint and precise concision. She was exceptionally good at conveying emotion obliquely. I find that her poems often seem dispassionate on the surface but they prove to have an emotional depth without falseness. There are excellent poems in all of her collections but out of Spilt Milk (1991), The Invisible Mender (1997), The Florist's At Midnight (2001) and The Pomegranates of Kandahar (2007), I'd especially recommend The Pomegranates of Kandahar, with its memorable poems about London, the Middle East, and gardens (three of her great loves).

Sarah is almost certainly going to be best remembered for her work with the Poetry Translation Centre. The only sadness in this is that it overshadowed her own work and, from what she said to me, probably didn't leave her enough space to write her own poetry. But it's hard to overstate how important the PTC has been in bringing foreign and non-English-language writers into the consciousness of English-speaking poets and readers (even a little). Sarah had been to Palestine and Yemen under the aegis of the British Council and this awakened her interest in poetry from these countries and from others, often with exceptionally rich poetic traditions, but also often portrayed in the media exclusively as countries of war and turmoil (she had a particular love for Somalian poetry).

I have realised that the PTC has been very important to me personally as a poet and a (tentative) translator. The PTC workshops, where all that was required from participants was an ability to make a contribution, opened up new vistas for me particularly with Arabic-language and Persian-language poetry. It gave me confidence that I had an ear for translation and it also helped me to value the contributions of others (an average PTC workshop might include SOAS students, linguists, poets and others). Sarah didn't speak the languages which the PTC translates from, but she was passionate about ensuring that the poems were translated as carefully as possible. Beyond the poems translated in the workshops, many exceptional poets came on board to assist with the PTC's translation pamphlets and books. It always struck me that everyone involved was very self-effacing. Perhaps most importantly, without the PTC, it's unlikely that English-speaking audience would even have the opportunity to know of and read truly great poets such as Al-Saddiq Al-Raddi (Sudan) and Hadraawi (Somalia).

Sarah Maguire was someone who truly appreciated and respected other cultures, and who also saw people from other countries just as they are - people, fellow humans, equals, with respect and no condescension. All this is rarer than it should be. Myself, I always found Sarah to be extremely personal and kind. They were only small things, but she was truly appreciative when I wrote about the PTC on my blog, when I expressed enthusiasm for Arabic poetry, when I got one of Al-Saddiq Al-Raddi's poems into an anthology I was editing, or when I asked if I could write about one of her own poems on my blog. At times, these encounters were when she was suffering from personal losses or when she was very ill. Even though I knew about her illness, it was a great shock to learn that she had died, far too young. She will be missed so much by friends, poets and colleagues from a wide variety of cultures.

Here are a few of Sarah's own poems:

Almost the Equinox
The Florist's At Midnight
Spilt Milk

And a couple of poems which she co-translated:

Here, finally, is her lecture Singing About the Dark Times: Poetry and Conflict.

Posted by Clarissa Aykroyd at 22:15 No comments:

Email ThisBlogThis!Share to TwitterShare to FacebookShare to Pinterest
Labels: Al-Saddiq Al-Raddi, Hadraawi, Pedro Serrano, Poetry Translation Centre, Sarah Maguire, translation
Newer Posts Older Posts Home
Subscribe to: Posts (Atom)
"The Stone and the Star simply IS poetry" (Anthony Wilson)
"The Stone and the Star constantly surprises with new discoveries and reminders of old favourites... Fast becoming a stalwart of the UK poetry blogging scene" (Matthew Stewart, Rogue Strands)
"Clarissa Aykroyd is doing an important thing: a poet writing about poetry, and with a spirit of awed enthusiasm" (Tim Buck, Spectral Lyre)
"Your life, with its immensity and fear,
...now bounded, now immeasurable,
it is alternately stone in you and star."
(from 'Evening', Rainer Maria Rilke,
translated by Stephen Mitchell)