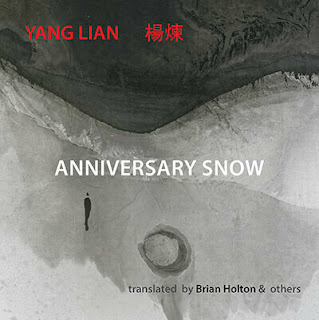 The inaugural Sarah Maguire Prize for Poetry in Translation, which recognises the best book of poetry by a living poet from Africa, Asia, Latin America or the Middle East published in an English translation, was awarded last Thursday 25th March. The prize is an endeavour of the Poetry Translation Centre and is in memory of its founder, the late Sarah Maguire, who I knew for a few years before her untimely death and who was a brilliant poet in her own right as well as a champion of poetry from parts of the world often under-recognised in English translation.
Out of a fascinatingly diverse field, the award went to the collection Anniversary Snow by Yang Lian, translated from Chinese by Brian Holton with further translations from WN Herbert, L. Leigh, Liang Lizhen, Pascale Petit, Fiona Sampson, George Szirtes and Joshua Weiner. Anniversary Snow is published by Shearsman Books and you can find it on their website here: https://www.shearsman.com/store/Yang-Lian-Anniversary-Snow-p140803770
The panel of judges commented: "The book is grounded in the historical roots of Chinese culture, poetry and art, but goes far beyond it, reinterpreting with poise and intelligence the very essence of our existence, from the changing landscape that surrounds us, the appeal of the natural world and the inner beauty of language, exemplifying its political force and its political teachings."
The PTC website has several excellent articles regarding the prize but I particularly recommend this fascinating and touching article by the winning poet Yang Lian: https://www.poetrytranslation.org/articles/where-did-anniversary-snow-fall
I'm delighted to be able to share a poem from Anniversary Snow. It appears below first in the original Chinese and then in its English translation.

can’t be real is that beauty’s fault?
imagine a shirt spread out on the riverbed

who says death isn’t a drenched harmony?
a little window on the riverbed lights up the show riverbed a word that never stops leaping downwards

houses down enjoyment of imminent snow goes up tongue tip is hooked ruin not enough by far?

there’s no time other than a contraction of the lungs

is filling up with sediment again still not enough?
in self-indulgent poetry there are only newly-arrived words

our aesthetic?
(from Anniversary Snow by Yang Lian, published by Shearsman Books)
Posted by Clarissa Aykroyd at 23:44 No comments:

Email ThisBlogThis!Share to TwitterShare to FacebookShare to Pinterest
Labels: Poetry Translation Centre, Sarah Maguire, Sarah Maguire Prize for Poetry in Translation, translation, Yang Lian
Newer Posts Older Posts Home
Subscribe to: Posts (Atom)
"The Stone and the Star simply IS poetry" (Anthony Wilson)
"The Stone and the Star constantly surprises with new discoveries and reminders of old favourites... Fast becoming a stalwart of the UK poetry blogging scene" (Matthew Stewart, Rogue Strands)
"Clarissa Aykroyd is doing an important thing: a poet writing about poetry, and with a spirit of awed enthusiasm" (Tim Buck, Spectral Lyre)
"Your life, with its immensity and fear,
...now bounded, now immeasurable,
it is alternately stone in you and star."
(from 'Evening', Rainer Maria Rilke,
translated by Stephen Mitchell)