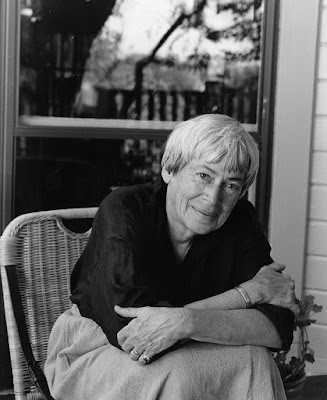 The novelist, essayist and poet Ursula Le Guin died a few days ago, on 22 January. She was 88.

There are so many things I could say about Le Guin. I remember seeing A Wizard of Earthsea in the library when I was young, and being a little frightened by the cover art. Later, I remember reading it on a long train trip in Finland, perhaps at the age of nine or ten. I also remember a certain remote, awed feeling about her name. Ursula Le Guin: it was like one of the characters in her books, perhaps a powerful and beautiful queen, and I think I suspected for a long time that it was a pen name.

Unlike with Watership Down, or even to a certain extent with Tolkien, I don't remember any coup de foudre moment with Le Guin's writing. My brother and I loved the first two Earthsea books - I think for some time we were especially keen on The Tombs of Atuan - but we found The Farthest Shore dull. Much later, I've realised it's one of her most beautiful and profound books. That says something about my relationship with Le Guin's writing: her books have been a part of my life for a very long time, indeed for most of it, but it was more of a slow burn.

It would be incorrect to say that I loved everything I ever read by Le Guin (and I haven't read all of her work, which gives me some relief now that she is gone). I love much of it, and admire all of it. She has been around for most of my artistic/literary/life development, but my awareness of her work has expanded gradually over the years. I enjoyed fantasy literature in childhood, so Earthsea was the logical place to begin. I'm not sure when I became aware that she was probably even more famous as a science fiction writer, author of The Dispossessed and The Left Hand of Darkness, among others. I suspect that for a long time, I was guilty of doing what she eventually taught me not to do: I pigeonholed her as a sci-fi/fantasy writer, as good as I knew her to be. In recent years I have realised that she was one of the greatest writers of our time - full stop. I now think of her as having left us one of the finest bodies of work from the 20th and 21st centuries. She was the author of magnificent literature, who happened to be working mainly in speculative fiction, and who was so often marginalised for it (and often for her gender, too) when her genius should have been shouted from the rooftops.

Genre fiction often gets shoved aside as mere entertainment. Le Guin's work was entertaining, but I never went to her other worlds merely to be entertained. I went to Earthsea or Anarres or the Western Shore or Orsinia in order to think, to meditate, to explore, to shake things loose in my mind. Her sense of humour is underrated and frequently present, but really, a profound seriousness runs through her writing and it demands that readers approach it seriously. In the days following her death, I've read many superb articles by people who knew her and/or were deeply influenced by her work. Many people have, one way or another, claimed her ideas on feminism, gender, politics and so forth. I have no desire to claim her ideas; in fact, I know that she and I would have disagreed on many things. But although she was a writer whose convictions shine through strongly, even overtly at times, in all of her writing, I found a freedom within her books as well. Her books didn't try to force agreement, which many less subtle and powerful writers have done, especially in recent years. They did, however, call on me to engage deeply with the text and to use my mind, to think about agreement, disagreement, compromise, changing one's mind or holding fast to one's convictions. She also treasured love and the small things which make up a life and its relationships.

As otherworldly as her writing is, there's also something extremely tangible and tactile about it. Even in her prose, her craft held many lessons for poets, in its spareness and meticulous choice of every word. She is not a writer for whom I would use the word "effortless". The craftwork in her writing is extremely evident, as it would be when looking at a beautiful piece of pottery, or a painstakingly worked statue. Many of her characters do such work, or jobs which are seemingly humble. She showed respect for all of it. Some years ago I visited Okinawa, and my friends bought me a stunningly beautiful pottery mug, dark-glazed, depicting a fish. It is pure Le Guin (and so was that world of Okinawa, its little islands, grey winds, bright waves and dark palms). When I still lived in my hometown of Victoria, Canada, I would sometimes see the work of sculptor Maarten Schaddelee, who carved flowing dolphins, sea creatures and waves, often out of highly polished wood. These too were "Le Guin" works of art to me. And it's appropriate that they came from either side of the Pacific Rim, because Le Guin lived in Portland, Oregon for much of her life, after growing up in California. There is a definite Pacific Northwest and West Coast air to so much of her work, which also brought me closer to it.

I have sometimes been known to say that I'm a bit under-read when it comes to the Great American Novel. Well, Ursula Le Guin was the great American novelist. It doesn't have to be a man or the author of Gravity's Rainbow or Portnoy's Complaint. When the writing is this good, when the thoughts are this expansive, the great American novelist can and should be a woman writing science fiction and fantasy. Like so many of her readers, I am deeply sad that she is gone, but slightly comforted that I haven't read all of her work yet - including much of her poetry, which many consider underrated. She could no longer work on another novel in the last few years, but she still had poetry. In one of the many articles written in the last few days, Zoë Carpenter, who had known her, wrote: "She told me it was important that I read her poems in order to understand her current preoccupations, her attempt to 'report from the frontier' of old age." I'll reread her novels and will move on gratefully to the poetry while I remember this extraordinary woman.

Email ThisBlogThis!Share to TwitterShare to FacebookShare to Pinterest
Labels: Ursula Le Guin
Newer Posts Older Posts Home
Subscribe to: Posts (Atom)
"The Stone and the Star simply IS poetry" (Anthony Wilson)
"The Stone and the Star constantly surprises with new discoveries and reminders of old favourites... Fast becoming a stalwart of the UK poetry blogging scene" (Matthew Stewart, Rogue Strands)
"Clarissa Aykroyd is doing an important thing: a poet writing about poetry, and with a spirit of awed enthusiasm" (Tim Buck, Spectral Lyre)
"Your life, with its immensity and fear,
...now bounded, now immeasurable,
it is alternately stone in you and star."
(from 'Evening', Rainer Maria Rilke,
translated by Stephen Mitchell)