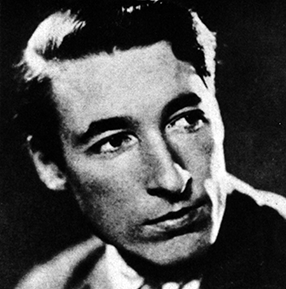 Louis MacNeice, in his occasional guise of near-prophet, published the poem 'To Posterity' in his 1957 collection Visitations.

'To Posterity' is an unusual poem to dedicate to, well, posterity - although MacNeice only had a few more years to live in 1957. The use of the word "media" was surely less common then (or perhaps used a bit differently) but it gives the poem an unmistakably technological air, although it is also pastoral, with its longing for green grass, blue sky, and other simple, fundamental elements of nature.

Succintly - and with a strangely prescient air - MacNeice touches on the issues which trouble us today: are technology and social media cutting us off from each other and from nature? Are they rearranging the connections our brains (and our hearts, perhaps) are capable of making? (It is only fair to point out that similar concerns arose during the advent of radio and television.)

The use of the words "seized up" hit me particularly hard: that's the kind of thing we say when our phones, tablets and laptops freeze or die, but here MacNeice applies it to books themselves. If he saw where we are today, he might not be so surprised. But perhaps MacNeice would also be happy to know that books have not actually seized up, and that the death of the paper book and the triumph of the e-book have so far been much exaggerated.

Posted by Clarissa Aykroyd at 21:12 No comments:

Email ThisBlogThis!Share to TwitterShare to FacebookShare to Pinterest
Labels: Louis Macneice
Newer Posts Older Posts Home
Subscribe to: Posts (Atom)
"The Stone and the Star simply IS poetry" (Anthony Wilson)
"The Stone and the Star constantly surprises with new discoveries and reminders of old favourites... Fast becoming a stalwart of the UK poetry blogging scene" (Matthew Stewart, Rogue Strands)
"Clarissa Aykroyd is doing an important thing: a poet writing about poetry, and with a spirit of awed enthusiasm" (Tim Buck, Spectral Lyre)
"Your life, with its immensity and fear,
...now bounded, now immeasurable,
it is alternately stone in you and star."
(from 'Evening', Rainer Maria Rilke,
translated by Stephen Mitchell)