Adam Zagajewski's 'To Go to Lvov': "It Is Everywhere" 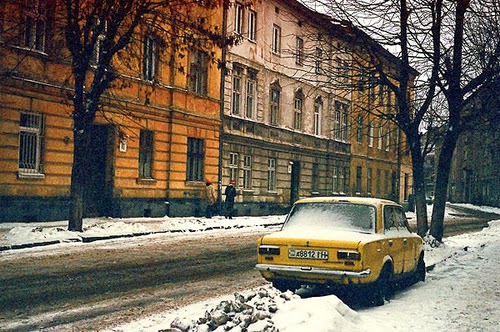 Since late last year, and particularly in the last few weeks, Ukraine has moved briefly into the world's fickle spotlight. No one knows exactly what will happen to its government or to its people, but the events of recent years have taught many nations to hope for the best and prepare for the worst.

The focus at this moment has moved away from the bloodshed in Kiev's Euromaidan to the largely pro-Russian Crimean peninsula, but a city in western Ukraine called Lviv, or Lvov, has also received attention. Lviv was part of Poland until 1939, when it came alternately under Russian and German control. Since the end of the war, it has been part of Ukraine, and most of its Polish residents were deported. It was also once a major Jewish centre - most of its Jewish population died between 1941 and 1943.

Lviv is one of the cities which in recent days has allied itself with the protestors in Kiev, threatening a decisive movement away from Russia and towards Europe, even independence. It made me think of one of the most famous and beloved poems by Polish poet Adam Zagajewski, 'To Go to Lvov'.


TO GO TO LVOV (Adam Zagajewski, translated by Renata Gorczynski)


Adam Zagajewski was born in Lvov in 1945, and he and his family were among those who were expelled in the same year, to central Poland. Amidst all the news about Ukraine, I was thinking about how it must shape a human being to live in places where borders shift, and cities change names and countries. 'To Go to Lvov' is partly about this: Lvov has become a sort of mythical place, a Borgesian city where "snails converse about eternity" and the stones murmur. The speaker isn't even sure if it is real or not. This happens when you know a place only through family stories, or when you lose it in childhood. But there's more to it: more that I can't really understand, coming from a stable country and a stable background - more so than what most people in this world experience.

I appreciate poetry's accuracy; it can give its readers a greater capacity for empathy. I wasn't born at the end of a war, we weren't refugees, we didn't live in countries where the borders kept shifting or where genocide had recently occurred. I've lived in three different countries, but those choices were entirely my own, more for pleasure than out of necessity. But poetry at its best breaks the boundaries of language to achieve such emotional accuracy that, through a poem such as this, a reader such as myself can glimpse the inner landscape of the people shaped by such events.

'To Go to Lvov' is a classic Adam Zagajewski poem. It remains in a delicate balance between darkness and optimism. As the poem goes on, the shadows draw in more and more thickly, like the clouds covering the sun.

[...] and the cathedral trembled, people bade goodbye
without handkerchiefs, no tears, such a dry
mouth, I won’t see you anymore, so much death
awaits you, why must every city
become Jerusalem and every man a Jew,
and now in a hurry just
pack, always, each day,
and go breathless, go to Lvov, after all
it exists, quiet and pure as
a peach. It is everywhere.


What is most terrible and wonderful about this conclusion is when the speaker says "why must every city/become Jerusalem and every man a Jew,/and now in a hurry just/pack..." We all know why so many Jews, and others, had to pack in a hurry; generally they were going to exile, often death. But then the sun emerges from the clouds: "go breathless, go to Lvov, after all/it exists, quiet and pure as/a peach. It is everywhere." Zagajewski turns around all the loss and grief and death implied. Instead of being nowhere, Lvov is everywhere. There is hope for everything that we have loved.

Posted by Clarissa Aykroyd at 22:23 4 comments: 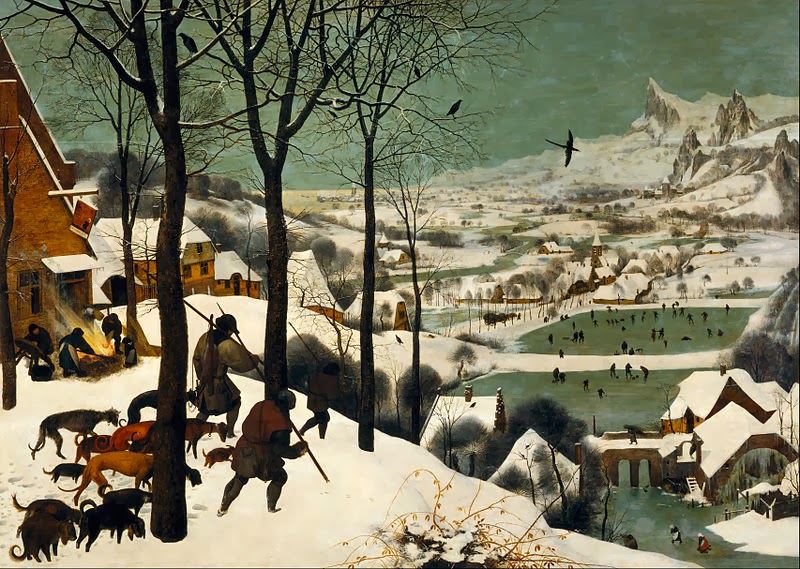 On Friday three of my poems were published in one day, which was a nice record for me. Also a bit of motivation for 2014, because last year I was anything but prolific poetry-wise.

The 'Wicklow Mountains' poem is actually ten years old but I always hoped to find a home for it. The final lines are still among my favourites that I've written. 'Okinawa' was written after my trip to that part of Japan a few years ago - it's another travel snapshot, but I also think (and sort of hope) that it might just possibly be the only poem ever written (let alone published) to mention both JMW Turner and Def Leppard. If anyone knows of such another poem, I desperately want to read it.

I subtitled this "after Rilke" because it was a bit too free to really be a "translation", I think. You can read the original French poem here. I had the (perhaps totally wrong and presumptuous) feeling that this poem was unfinished, that Rilke would like to have worked on it some more. So I think that a lot of the words are mine, building on the original, but the ideas are essentially the same as in Rilke's original poem. I chose not to try to reproduce the end rhymes which appear in the French poem, but my version is far more alliterative than Rilke's. The alliteration is perhaps the aspect in which it is the most my own. It was a very enjoyable poem to create a version of because, as so often with Rilke, his words seemed to speak from his heart to my heart.

Posted by Clarissa Aykroyd at 23:25 2 comments:

Sidney Keyes: "Time Turns Back and the Doubtful Season Passes" 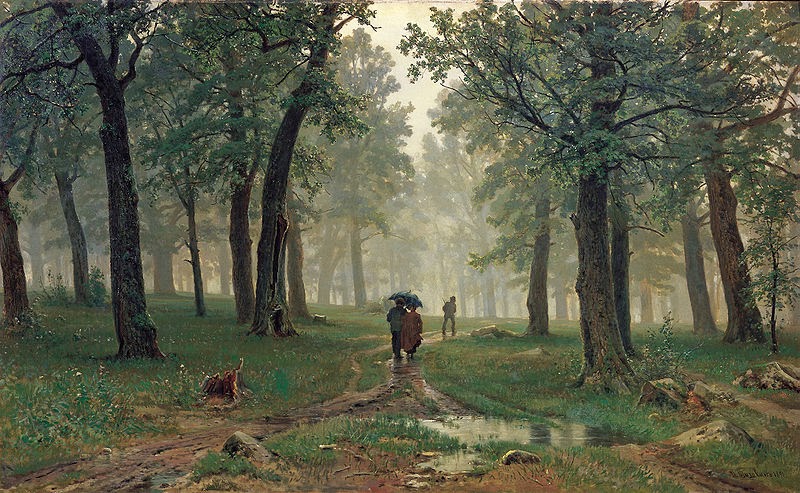 
It might be too much sadness to post a poem every month this year by Sidney Keyes, who didn't live to see his 21st birthday - it is just enormously sad that he is out of copyright this year, to be followed very soon by the other great World War II poets. Still, a poem every month is very tempting. He deserves it, and so do the readers.

This poem, 'The Doubtful Season', makes very explicit the non-linear nature of time, which is something poetry partakes of more successfully than other art forms, I think. The poem has a curious effect of both unfolding and turning in on itself, line by line, creating a kind of maze. I find that it can be interpreted equally as optimistic or despairing - a sort of reconciling and things turning out right, or an impossible-to-escape repeating treadmill (Groundhog Day?). Tonight I take it as optimism, having (I think) recently come out the other side of a doubtful season of my own.


The doubtful season of the brain's black weather
Blew through me, but you waited for its end.
My months were all named backwards till you showed me
That even the mind is not deceived for ever.

O in October it would be the blazoned
Leaves of the chestnut on the cobbled pavement:
And we would seek in the corridors of autumn
Denial of faith and of the summer's achievement.

And in the early year it was another
Sign of evasion when the poplars clattered
To sharpened ears above the metal river -
And I would turn to find your eyes were shuttered.

Even that almost parting on the stair
I could not understand, nor why the candles
Sprouted such flowers between our sculptured faces:
Nor why the river glinted in your hair.

O in July it was our love was started
Like any hare among the watchful grasses;
Its running is my song, my only song
How time turns back and the doubtful season passes.

Carolyn Forché's 'Letter to a City Under Siege': Sarajevo Revisited


One of my favourite poets, Carolyn Forché, has just co-edited with Duncan Wu an anthology called Poetry of Witness: The Tradition in English, 1500-2001. Carolyn Forché has already edited a well-known "poetry of witness" anthology called Against Forgetting, which I've lately been reading - a lot of it focuses on non-English language poetry in English translation, so I would expect this new book to include mostly different selections. I look forward to reading it when I can.

In this video, Forché talks about the new anthology and "poetry of witness".

I've already written about her poem 'Travel Papers' here, and the beautifully (though also tragically) inclusive idea that poetry of witness is not about trying to enforce a political ideology, but about poetry as the trace (sometimes the only trace) of a meaningful, tragic or painful event. It's one of the things which keeps me coming back to her own poetry, particularly in a collection such as The Angel of History.

Further to my brief thoughts on Lawrence Durrell's poem 'Sarajevo', I thought of Forché's poem 'Letter to a City Under Siege' - also about Sarajevo, but about the city's experiences decades after the Durrell poem and its references to the assassination of Archduke Franz Ferdinand. 'Letter to a City Under Siege' is about Sarajevo in the siege it endured during the Balkan Wars of the 1990s. Specifically, the poem was written to a friend who lived through the siege.

I think that the poems contrast quite neatly; the Durrell poem is very spacious, and seems to circle in closer and closer like a camera zooming in, or a bird of prey drawing down - but it still stays well away, airborne. Forché's poem eventually starts pulling away (in the reverse direction) to the "roofs filled with sky", but that's after it winds its way through a kind of tight, claustrophobic labyrinth - the pages (literal or metaphorical) where her friend has made notes, the tunnel where food was smuggled, the delicate and harsh details of the siege. It is completely personal where the Durrell poem remains more abstract and impersonal.

At the end of 'Letter to a City Under Siege', the oranges seem to light the way in the darkness of the tunnel. There is hope.


LETTER TO A CITY UNDER SIEGE (Carolyn Forché)

Posted by Clarissa Aykroyd at 23:03 No comments:

Email ThisBlogThis!Share to TwitterShare to FacebookShare to Pinterest
Labels: Carolyn Forché, Duncan Wu, Lawrence Durrell
Newer Posts Older Posts Home
Subscribe to: Posts (Atom)
"The Stone and the Star simply IS poetry" (Anthony Wilson)
"The Stone and the Star constantly surprises with new discoveries and reminders of old favourites... Fast becoming a stalwart of the UK poetry blogging scene" (Matthew Stewart, Rogue Strands)
"Clarissa Aykroyd is doing an important thing: a poet writing about poetry, and with a spirit of awed enthusiasm" (Tim Buck, Spectral Lyre)
"Your life, with its immensity and fear,
...now bounded, now immeasurable,
it is alternately stone in you and star."
(from 'Evening', Rainer Maria Rilke,
translated by Stephen Mitchell)