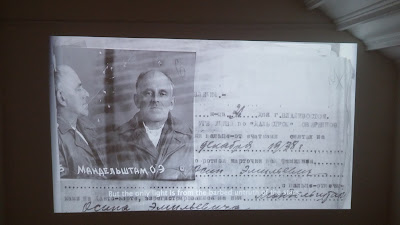 London's Russian cultural centre Pushkin House is currently running a programme about Russian poetry in exile, to commemorate the centenary of the Russian Revolution. Along with information about their 101st km Further Everywhere pavilion on Bloomsbury Square (until 10 November) you can also find the programme of poetry events here. There are still a few events to go.

On 19 October I went to see the film Keep My Words Forever (directed by Roma Liberov, in Russian with English subtitles), about the life of Osip Mandelstam. The film combined puppetry, animation using cutouts and other effects, and documentary filming. I wasn't totally sure how this was going to work but it turned out to be an extremely moving film, capturing Mandelstam's often manic energy and its disintegration into illness and depression after years of persecution. As the director said, particularly with the use of puppets, it felt as though there was a short period of adjustment needed while watching and then viewers start to see the people in the puppets. This was exactly how it was, for me. The translations used were by a wide variety of Mandelstam's many translators.

Speaking after the film, Roma Liberov referred to the Russian Revolution and what followed as "interrupted history - a social experiment" (which reminded me of when I saw Russian poet Maria Stepanova some years ago and she spoke of decades of "frozen history"). Liberov pointed out that poets in Russia died for the right to write outside of the propaganda machine, and that Mandelstam died principally because people in the literary establishment didn't like him and decided to ensure his downfall. (The latter was an interesting point because it is often assumed that he died specifically because of the 'Stalin Epigram', but Mandelstam didn't particularly consider himself a political poet and his views were more complex than that.) He was hard to capture in the film, said Liberov, but I felt there was success up to a point. I thought Keep My Words Forever was a beautiful and appropriate title. Osip Mandelstam's wife Nadezhda memorised his work and ensured that it was preserved (her story is completely extraordinary in itself) and there we were hearing his words nearly 80 years after the poet died. I wondered how Mandelstam would feel if he could know that.

In the lobby at Pushkin House, film clips with photos of Mandelstam and his handwriting were playing, and a recording of his voice. Liberov said that while it is often difficult to know at which speed old recordings should be played, this one had been listened to by Mandelstam's friend Korney Chukovsky (himself a famous Russian children's poet and literary critic) and that Chukovsky had confirmed at which speed his friend's voice sounded right to him.

Posted by Clarissa Aykroyd at 18:17 2 comments:

A Report from Poetry International (London) 2017 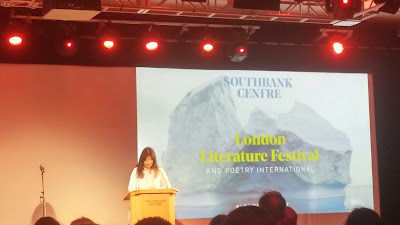 
Ted Hughes founded the Poetry International festival in 1967, and its 50th anniversary celebration was on 14-15 October at Southbank Centre in London, where it all started.

I had hoped to attend more events at this year's Poetry International, but I've been very busy lately and couldn't manage to plan a whole weekend of poetry events; I still made it to a few, though. There was a particular focus this year on disappearing languages, and the first event I went to was called Seven Thousand Words for Human: Endangered Poetry. Translator and poet Stephen Watts asked "Is poetry an endangered language?" and pointed out that translation can either be colonising, or have a bringing-in effect. Joy Harjo, a Native American of the Muscogee (Creek) Nation, read in her indigenous language and said "Part of coming home is the language." There were also wonderful readings by Nick Makoha and others from a variety of languages under threat, such as Luganda and Sardinian.

The Modern Poetry in Translation event on Saturday evening was partly to say goodbye to Sasha Dugdale as its editor - she is handing on the role to Clare Pollard. Sasha has done an incredible job in extending the reach of MPT during her years with the journal. There were amazing readings by the Syrian Kurdish poet Golan Haji, whose work I first discovered a few years ago now, and his translator Stephen Watts, who also read some of his own poetry.

On Sunday, the World Poetry Summit featured Joy Harjo (US), Sjón (Iceland), Yang Lian (China), Anne Carson (Canada), Claudia Rankine (US), Vahni Capildeo (Trinidad) and Arundhathi Subramaniam (India). Choman Hardi should have been there and at other events, but couldn't get out of Kurdistan due to the ongoing crisis there. We did hear recordings of her poems. All of the readers were excellent, but I was particularly moved by Joy Harjo singing her extraordinary poem 'Equinox' and by Claudia Rankine's contrasting readings from Citizen and Don't Let Me Be Lonely (the former sombre, the latter more hopeful.)

Coincidentally, at the World Poetry Summit I found myself sitting next to Elzbieta Wójcik-Leese, who I already knew a little and who is one of the world's foremost translators of contemporary Polish poetry. It was good to catch up, and after the readings we went to the Poetry Library's open day, which this year focused on the theme 'A Universal Language'. 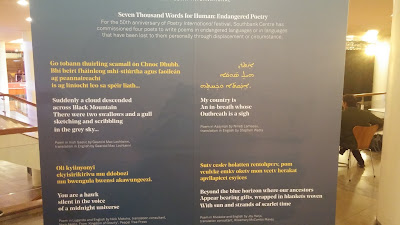 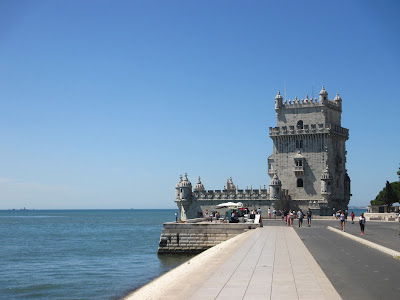 Shot Glass Journal has published three of my recent poems, 'Lisbon', 'Dakar' and 'Kingdom'. You can read them here: http://www.musepiepress.com/shotglass/clarissa_aykroyd1.html

These all came out of trips I took in 2016 - 'Kingdom' was written after a trip to Finland, and I travelled to Portugal and Senegal a few months later.

I had thought to myself that perhaps one poem was more about the place, perhaps another was about the emotional state generated by it: but in fact, the two are often indivisible for me.

Posted by Clarissa Aykroyd at 22:09 No comments:

Email ThisBlogThis!Share to TwitterShare to FacebookShare to Pinterest
Labels: Finland, my own poems, Portugal, Senegal, Shot Glass Journal
Newer Posts Older Posts Home
Subscribe to: Posts (Atom)
"The Stone and the Star simply IS poetry" (Anthony Wilson)
"The Stone and the Star constantly surprises with new discoveries and reminders of old favourites... Fast becoming a stalwart of the UK poetry blogging scene" (Matthew Stewart, Rogue Strands)
"Clarissa Aykroyd is doing an important thing: a poet writing about poetry, and with a spirit of awed enthusiasm" (Tim Buck, Spectral Lyre)
"Your life, with its immensity and fear,
...now bounded, now immeasurable,
it is alternately stone in you and star."
(from 'Evening', Rainer Maria Rilke,
translated by Stephen Mitchell)