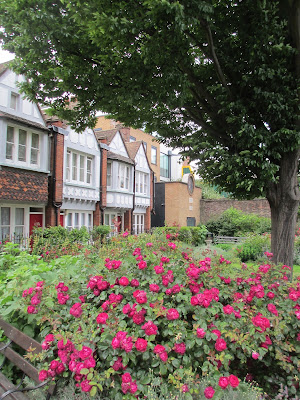 
As a follow-up to the Mixed Borders project I took part in this summer, where poets-in-residence did poetry things in and around gardens for the London Open Garden Squares Weekend in June, the Poetry School recently published a pamphlet featuring some of our poems.

The pamphlet can be found here in flicky-book format and in PDF. Among many others by the talented poets who took part, it contains my Red Cross Garden poem 'Restoration'.

Posted by Clarissa Aykroyd at 22:48 No comments: 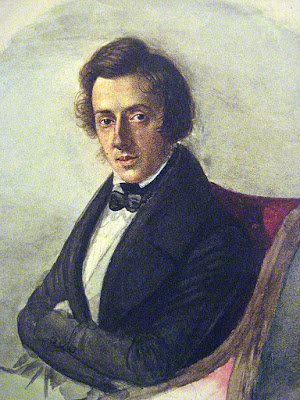 
Life seems to have been distracting and distracted of late, and I had to follow a thought down the rabbit hole to find something to write about tonight.

I played the piano pretty seriously for about ten years in my childhood and teens - starting with the spinet or harpsichord, because unusually, my parents had one at home. (It had been my grandfather's, and when my father's family lived in Calgary, the orchestra used to borrow it.) The harpsichord will limit you to Renaissance and Baroque music, as beautiful as it is, and eventually I moved on to the piano.

I was the piano student who had talent but would probably have done better had she practised more. I still did reasonably well, but I can't help wondering if my teacher slightly regretted introducing me to the great Polish composer Chopin in the last few years that I was actively playing. I already knew his music up to a point and was keen to trying playing it. As it turned out, I loved playing Chopin so much that I didn't really want to play anything else. (This wouldn't have been a problem but for the fact that I was practicing for exams where only playing Chopin wasn't an option.) The Nocturnes hit me particularly hard. Some of them were far too difficult for me, but I gave quite a few of them a go, and some with success - along with some Preludes and Etudes.

Fryderyk Chopin is the poet of the piano. It was his medium, like no one else's. There is an extreme purity of emotion in his music which often overwhelms me. It's the tightrope walk between beauty and despair, over the abyss.

My father and I were watching a Chopin documentary together when I was in Canada, and this led to me writing a poem which rather strangely was both about Chopin and about Urbain Le Verrier, the French mathematician who predicted the existence of Neptune. Chopin mentioned Le Verrier in one of his letters. I was already thinking of writing a poem on the subject of Space, which I had been requested to do for my reading with The Quiet Compere (which took place last week in Hackney). Chopin and Le Verrier proved to be the subject of my poem, in the end.

Tonight, I thought I would see if there is poetry about Chopin. There is, but perhaps not a great deal or not specifically about him. But then I found this very moving 'Elegy' by Anne Stevenson about her logical, rational father's passion for the piano. The tension - or the beauty of the balance - between logic and emotion is also something I have been thinking about lately.

Posted by Clarissa Aykroyd at 23:20 2 comments: 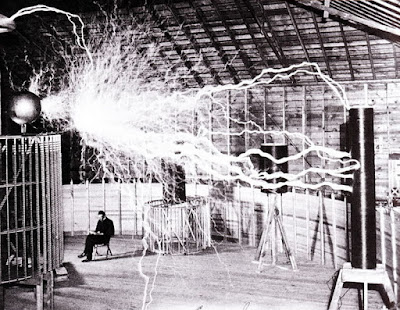 
I was in Canada on 8 October - National Poetry Day in the UK - and with the time difference I slept through most of the happy occasion. However, on 11 October Ink Sweat and Tears published my poem 'Thinking of Tesla on the District Line',  as part of their program of poems for the week following National Poetry Day.

This year's theme for National Poetry Day was Light. I wrote the poem some time ago as a little tribute to Nikola Tesla, a favourite scientist, and it seemed to fit the theme well so I sent it off to Ink Sweat & Tears. I don't usually have favourite scientists, and it is fair to say that rather than really being a poem about science, this is a Famous Dead Guy Crush poem. Tesla was a remarkable man. The glimpse of lights from the District line is real, by the way. I think you will find it around Gloucester Road, though I can never remember exactly.

Email ThisBlogThis!Share to TwitterShare to FacebookShare to Pinterest
Labels: Ink Sweat and Tears, my own poems, National Poetry Day, Nikola Tesla
Newer Posts Older Posts Home
Subscribe to: Posts (Atom)
"The Stone and the Star simply IS poetry" (Anthony Wilson)
"The Stone and the Star constantly surprises with new discoveries and reminders of old favourites... Fast becoming a stalwart of the UK poetry blogging scene" (Matthew Stewart, Rogue Strands)
"Clarissa Aykroyd is doing an important thing: a poet writing about poetry, and with a spirit of awed enthusiasm" (Tim Buck, Spectral Lyre)
"Your life, with its immensity and fear,
...now bounded, now immeasurable,
it is alternately stone in you and star."
(from 'Evening', Rainer Maria Rilke,
translated by Stephen Mitchell)