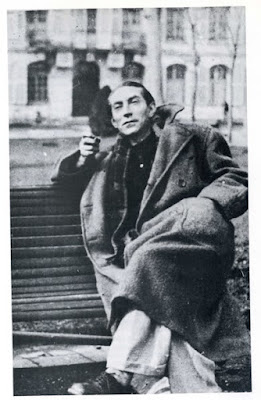 In case you thought this was just a lot of big talk, I actually did pick up Benjamin Fondane's Le mal des fantômes in Paris a few months ago and I've now translated a few of his poems. I'm looking at translating a few more and seeing if I can find a suitable home for them somewhere. (I feel more trepidation over sending out translations than over sending out original work, but that's another story.)

In the meantime, I thought I'd share this interesting excerpt from a 1985 interview with EM Cioran, who knew both Fondane and Paul Celan. It confirmed my readings of their respective work. (The interview was with Leonard Schwartz and appears in the recent selection of Fondane's work in English translation, Cinepoems and Others, published by New York Review Books, 2016).


Leonard Schwartz: Do you see any sort of connection between Paul Celan and Fondane?

EM Cioran: I knew both Fondane and Paul Celan well, and I suppose it is true that they had something in common. They came from almost the same geographic area in Romania: Bukovina and Moldavia are provinces that border on each other. Both were Jewish poets and both had an intellectual curiosity which is not absolutely normal in a poet. But they were very different as men. Fondane had an immense presence; all became enlivened around him; we were very pleased to hear him speak. Around Celan one felt a kind of uneasiness. As I've told you before, Celan was so susceptible, so vulnerable: Everything hurt him... With Celan one always had to be on guard. He was a wounded man, in the metaphysical and psychological sense of the word, and that was why one felt so uneasy. Whereas Fondane was the contrary: You felt you didn't have to supervise yourself.

Posted by Clarissa Aykroyd at 21:30 2 comments: 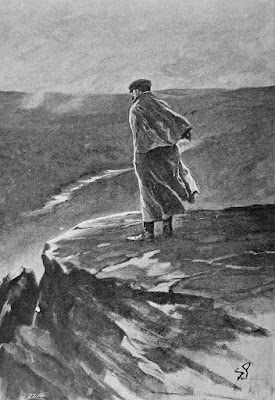 I still write poems on other subjects (I promise) but my recent poetry publications have been of the Sherlock Holmes variety.

In late June my poem 'Beekeeper' (which first appeared in The Ofi Press Magazine) was reprinted in Canadian Holmes. This is the journal of the Bootmakers of Toronto, one of Canada's pre-eminent Sherlockian societies. I was a member for several years, during which time I published several reviews and essays in Canadian Holmes - including an essay written when I was in junior high and attempting to prove that Sherlock Holmes was a Canadian. Canadian Holmes also printed a poem I wrote in tribute to Jeremy Brett (my favourite Sherlock Holmes actor, and probably my favourite actor full stop) after his death in 1995. I was 16 and it was either my first poetry publication or one of the first. This was my first publication in Canadian Holmes for something like 15 years, so it's nice to be back.

In early July, Ink Sweat & Tears published my poem 'Watson on Dartmoor', which strictly speaking is a Watson poem rather than a Holmes poem. Watson, a romantic soul, seems quite overwhelmed by the eerie atmosphere of Dartmoor in The Hound of the Baskervilles. But if I'm honest, this poem is mainly me being Watson. I visited Dartmoor a few years ago - it was December, and it was just like the descriptions in the Hound, but more so. It truly feels like a world part of but separate from our own, and so it can never be fully captured.


Image: I Looked Out Across the Melancholy Downs (Sidney Paget, from The Hound of the Baskervilles, 1902)

Posted by Clarissa Aykroyd at 22:10 2 comments:

Hokusai at the British Museum 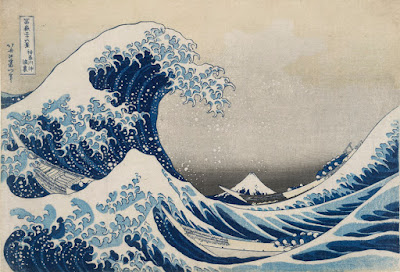 The Great Wave of Kanagawa. Hokusai, 1831


About ten days ago, I went to the British Museum's exhibition Hokusai: Beyond the Great Wave (until 13 August, but check ticket availability if you're interested in going).

Hokusai (1760-1849), one of the greatest Japanese artists of the creatively rich Edo period (1603-1868), is best known for The Great Wave of Kanagawa, one of a beautiful series of Thirty-Six Views of Mount Fuji. The exhibition featured many of these famous prints but it also highlighted the unusual European influence in many of his works and the extraordinary range of his art. I saw cherry blossoms whose petals were so soft and multifoliate that I wanted to touch them, birds that seemed photographic but with a hyper-real beauty, swirling dragons, sharply defined bridges and lakes like something out of Tolkien, wry and delicate self-portraits.

Hokusai was also very close to the poetry world. He provided illustrations for poems, and depicted poets, in the series A True Mirror of Chinese and Japanese Poetry and One Hundred Poems Explained By the Nurse. In this particularly beautiful example, Poet traveling in the snow, the rider may be the Chinese poet Du Fu (or Tu Fu; 712-70), one of the greatest figures of Chinese literature. It's suggested that he could also be the poet Su Shi (1037-1101), who was famous for writing poems about snow.

Hokusai's work became more and more extraordinary in the last years of his life. In the final room, looking at the paintings on silk from the two years before he died, I found myself struggling to breathe, then in tears. I saw a dragon with desperate human eyes emerging from rain clouds, diving ducks transforming beneath the surface, a joyous tiger bounding upwards through the snow. Shortly before his death, Hokusai reportedly said "If only Heaven will give me just another ten years... Just another five years, then I could become a real painter."

Posted by Clarissa Aykroyd at 23:59 No comments: 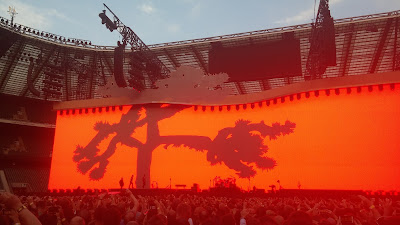 U2's current world tour is, unusually, not to promote a new album - it's for the 30th anniversary of The Joshua Tree and they are playing this album in its entirety, along with other songs before and after. I saw them last Sunday at Twickenham Stadium in London. It was a remarkable show for many reasons, not least of which was the screening of poems on the stage backdrop just before the show actually started.

I have a long history with U2, which sort of started close to 30 years ago when my brother bought The Joshua Tree. But it really started a few years later when I bought War, Under a Blood Red Sky, The Unforgettable Fire and later their other albums, when I was about 14. Those albums feature very prominently in my mental and emotional timeline from my early teens. I discovered those albums for myself, and the obsession was like falling in love. My relationship with The Joshua Tree is probably a bit harder to define, as I first encountered it through my brother and through the radio when I was younger. I was always impressed, but I also regarded the album with a slightly detached sense of awe which I've never quite shaken. I think it's their best record, but I'm not quite as closely bonded to it as I am to albums like War and Unforgettable Fire. I'm perhaps closer to its individual songs than I am to The Joshua Tree as a whole.

Before seeing U2 play on Sunday, I was already aware that they were scrolling poems on the big screen during the intermission between the opening act and the start of the main show. There was a fair amount of media coverage in Canada when one of the poems chosen was by Canadian poet laureate George Elliott Clarke. However, most (if not all) of the other poems chosen are by Americans, and it seems that different poems have been used at different shows. The poems that I saw were:

Elizabeth Alexander - 'Praise Song for the Day'. This poem was read at Barack Obama's inauguration. 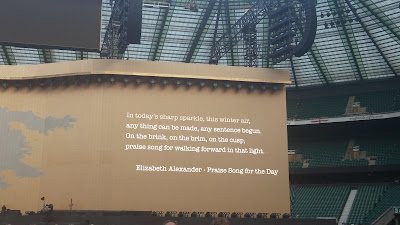 Walt Whitman - a selection from Leaves of Grass 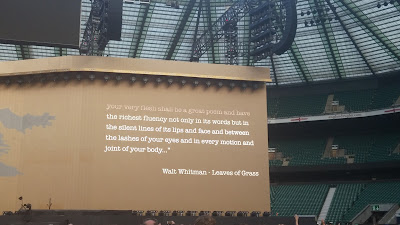 Sherman Alexie - 'The Powwow at the End of the World' 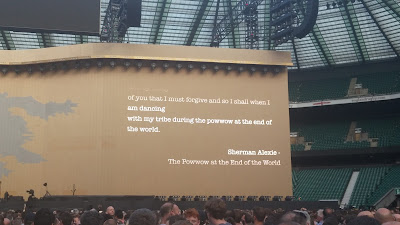 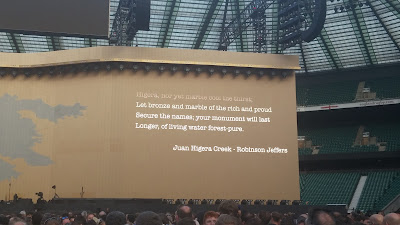 James Dickey - 'The Strength of Fields' 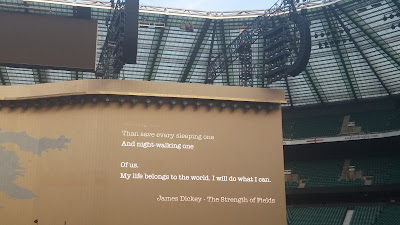 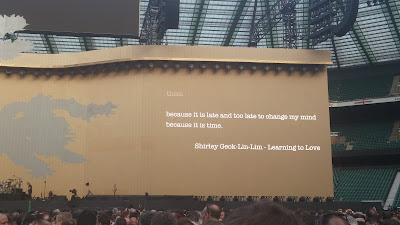 Pedro Pietri - 'Puerto Rican Obituary' (I didn't get a picture of this one, as the show was starting just as the poem finished...)

This U2 website has detailed more of the poems which were included on other shows (or perhaps I missed others when my friend and I were wandering around after the opening act.) Many of these poems will also be available to read online: http://www.u2songs.com/news/the_joshua_tree_tour_poetry

Personally, I was especially surprised and happy to see the Robinson Jeffers poem 'Juan Higera Creek'. Jeffers has been a bit of a well-kept secret for a long time, but in the current socio-political-environmental climate he seems to be enjoying something of a renaissance. I also love the James Dickey poem, 'The Strength of Fields'.

I don't know who was involved in selecting the poems, but to accompany (or precede) The Joshua Tree, they seemed to me exceptionally well chosen. In them, I saw the following which I also find in The Joshua Tree:

A variety of voices and experiences, including those of minorities and immigrants. The poems are by Native Americans, African Americans, Asian Americans and Hispanic Americans, among others. U2 composed The Joshua Tree in part because they'd fallen in love with America, and as Irish musicians they were well aware of their country's close links to America and of the huge numbers of Americans who are descended from Irish immigrants.

American landscapes. The landscapes of The Joshua Tree are dual (at least), as in poetry's landscapes. When U2 played 'Where the Streets Have No Name' ("I'll show you a place high on a desert plain, where the streets have no name"), the huge backdrop screen sent us flying along an American desert highway. The song was also partly inspired by Bono's humanitarian work in Ethiopia and by the divisions in Northern Ireland when he was growing up; finally, it seems to be about the speaker's spiritual quest (continued in 'I Still Haven't Found What I'm Looking For'. There seems to be something of this in 'The Strength of Fields'.) But the imagery of the album's lyrics often evoke idealised American landscapes, especially in the song 'In God's Country'. These poems also travel all over a real and figurative America.

Stories of oppression. 'Puerto Rican Obituary' came out of Pedro Pietri's experiences in advocating for civil rights along with fellow Puerto Ricans in America, and it tells a series of tragic stories. The songs 'Bullet the Blue Sky' and 'Mothers of the Disappeared', in particular, are about US military intervention in Latin America and about los desaparecidos in countries such as Argentina, Chile and El Salvador. There is a strong duality in The Joshua Tree between a mythical America and a violent one, whether internationally or closer to home (the song 'Exit' is about gun violence, and apparently the line "The hands that build can also pull down" also comments on the dual nature of US interference abroad).

The language of the poems may at times be prosaic, but the impression is often prophetic and spiritual, even shamanistic. This is also very reminiscent of U2's (Bono's) lyrical approach. Bono often includes literary references in his songs, and this was definitely a factor in my affection for U2, especially given that I was falling in love with U2 and with the poetry of WB Yeats at the same time in my early teens. Here are some of the notable poetry references in U2 songs:


There are plenty of other literary references in U2, but I suppose it comes down to this: Sunday's concert was one of the best of my life (the fact that we had hard-to-come-by standing tickets helped a lot), and The Joshua Tree has more than stood the test of time. It was lovely to see some great poetry projected on the screen for all to read, and to reflect on how both poetry and U2 have accompanied me, and often intersected, for a very long time.