Poetry and TV: From Battlestar Galactica to The Little Drummer Girl 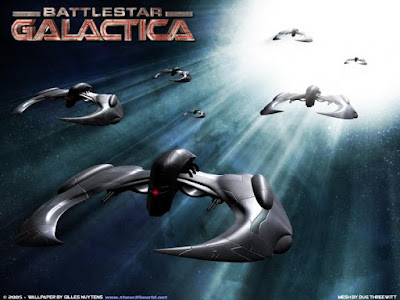 I recently finished watching all four seasons of Battlestar Galactica (the 2000s 'reboot' series - and yes, I am aware that it actually finished ten years ago. I'm also aware that streaming services are pure evil and that I have been watching too many box sets recently.) I'm not quite sure how I got started on this series; it is considered one of the best science fiction TV series ever made, but on the other hand, sci-fi is not usually my thing. However, Battlestar Galactica is really about politics, faith, human identity, the terrible challenges of leadership, conflicting loyalties, and a lot of other fascinating stuff, so it worked for me (as do films like Blade Runner, Inception and Arrival, and the works of Ursula Le Guin). It also turned out to have one of my favourite on-screen relationships of all time - William Adama (Edward James Olmos) and Laura Roslin (Mary McDonnell).

Anyway - in my defense for watching too much TV - I love a good poetry reference in the middle of an episode, and in Battlestar Galactica it happened during the episode 'A Disquiet Follows My Soul' (season 4), when an already bleak series has quickly become about ten times bleaker. Admiral Adama is heard reciting the first few lines of this poem by Emily Dickinson.


THERE IS A LANGUOR OF THE LIFE (Emily Dickinson)

A Drowsiness -- diffuses --
A Dimness like a Fog
Envelops Consciousness --
As Mists -- obliterate a Crag.

And he will tell you -- skill is late --
A Mightier than He --
Has ministered before Him --
There's no Vitality.


I find it equally moving to imagine that some viewers will hear these words, have no idea where they're from and still be touched by them, while others will catch (or look up) the reference and appreciate the added dimension of intertextuality. Although only a few lines were quoted, the poem as a whole seemed to intersect with the show's themes in many ways.

I'm more used to finding poetry references in novels, short stories, or even non-fiction writing, but it occurred to me that I've come across several wonderful poet/poetry quotations or allusions in a few TV shows recently. In the most recent season of Elementary, the modern Sherlock Holmes adaptation which places Holmes (Jonny Lee Miller) in New York alongside Watson (Lucy Liu), Holmes quotes Rainer Maria Rilke: "When anxious, uneasy and bad thoughts come, I go to the sea, and the sea drowns them out with its great wide sounds, cleanses me with its noise, and imposes a rhythm upon everything in me that is bewildered and confused" (translated by Jane Bannard Greene and M.D. Herter Norton). I thought this was a particularly nice touch because the original Holmes liked to quote Goethe, among others; surely he would have quoted Rilke as well, but that poet's work came a little late for Holmes's original moment in time.

A few spy shows I've watched have also contained intriguing poetry references. This is often also the case in spy novels, and it always seems appropriate because poetry can resemble a code (which does not necessarily mean that it is a code). In the recent TV miniseries adaptation of The Little Drummer Girl by John le Carré, the young actor Charlie (Florence Pugh) reads a Mahmoud Darwish poem as part of the (literally) theatrical love affair she's embarked on:


Did you dance with young angels
while you were dreaming? Did the butterfly
light you up when it burned with the eternal
light of the rose?

(translated from the Arabic by Omnia Amin and Rick London)


In Season 4 of The Bureau (Le bureau des légendes), an exceptional French espionage show, a book of poems by Robert Desnos makes a brief appearance. The surrealist poet Desnos, who perished in Terezín in 1945, was also involved in the Réseau AGIR, a French Resistance espionage network providing information on German bombing facilities. Desnos' work for them involved the creation of false identity papers.

I've also been watching Counterpart, a disturbing spy show about parallel worlds in Berlin (obviously inspired by, but not exactly about, the divided city of the Cold War). Rilke also makes an appearance here, when Howard Silk (JK Simmons) reads his poetry to his wife, who is in a coma:


You, you only exist.
We pass away, till at last,
our passing is so immense
that you arise: beautiful moment,
in all your suddenness...

(translated from the German by Stephen Mitchell)


In another scene, the children's poem 'On the Other Side of the Door' by Jeff Moss is quoted, in one of the most bone-chillingly inappropriately appropriate uses of poetry I've seen on screen:


On the other side of the door
I can be a different me
As smart and as brave, as funny or strong
As a person could want to be.


TV shows (like any other entertainment) are never without their flaws, but the genuine depth added and the respect for literature shown by these poetry references are something I truly appreciated and for which I'll continue to watch.