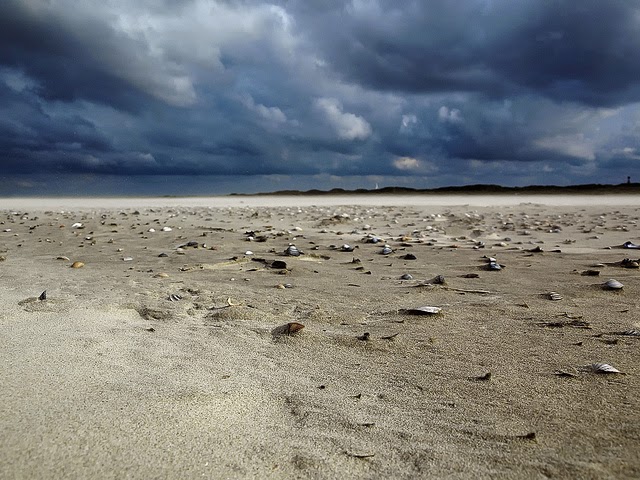 
Here, as the end of the year approaches, is a chilly poem about Germany - or, quite possibly, looking across into Germany from England - by Sidney Keyes. I will soon be heading for Germany, and it seemed a wintry poem anyway.

I am sure that in 2015 I will continue to post poems by Sidney Keyes, but you may expect to see a lot by Keith Douglas. He will, rather sadly, be out of copyright then.


The evening thickens. Figures like a frieze
Cross the sea's face, their cold unlifted heads
Disdainful of the wind that pulls their hair.
The brown light lies across the harbour wall.

And eastward looking, eastward wondering
I meet the eyes of Heine's ghost, who saw
His failure in the grey forsaken waves
At Rulenstein one autumn. And between
Rises the shape in more than memory
Of Düsseldorf, the ringing, the river-enfolding
City that brought such sorrow on us both.

Nomination for the 2016 Pushcart Prize

It was great to hear recently from Muse-Pie Press that they had nominated my poem 'Wicklow Mountains After Rain' (which appeared in their short-poem publication Shot Glass Journal) for a 2016 Pushcart Prize.

This follows their nomination, last year, of one of my poems for the 2015 Pushcart Prize. I'm very flattered, and obviously it's once again motivation to get working...
Posted by Clarissa Aykroyd at 11:38 4 comments:

Anselm Kiefer and Paul Celan at the Royal Academy

In recent weeks I've been reading Paul Celan again. I move in and out of the Celanian moments in my life (when I say "moments", these can last for weeks or months). I don't find it possible to read Celan all the time - I get tired and sad if I go on for too long, though his work can also be very clarifying in the right proportion. I have never been able to forget the comment by Michael Hamburger, one of Celan's most dedicated translators: "From the first my engagement with the work of Celan had been difficult and sporadic. Had it become a full-time occupation and specialisation, it could have driven me into suicide, as it did his friend and interpreter Peter Szondi."

Anyway, I have been reading John Felstiner's wonderful translations, and I have also finally started reading Felstiner's biography Paul Celan: Poet, Survivor, Jew. I'm also about to dip (or dive) into Pierre Joris's new translations of Celan's later works, Breathturn into Timestead. But I came back to Celan this time most notably through the Anselm Kiefer exhibition currently showing at the Royal Academy in London, which will end in a few days.

For someone (me) who is mostly drawn to art created one hundred years ago or more, Kiefer's work seemed a bit alien and intimidating. In a post-World War II Germany he created controversial works touching provocatively on Nazi symbolism, and has otherwise explored the threads of German history, its influences, and its own influence on the world. Many of his works are massive in size, overwhelming. My way in, and my main reason for going to the exhibition, was the influence of Paul Celan's works.

Kiefer has many artworks directly inspired by Celan's poems and several of them were in the exhibition. The paintings Margarete and Sulamith, directly inspired by 'Deathfugue', appeared side by side. Next to them, on the wall, was John Felstiner's translation in full of 'Deathfugue' - this translation is particularly famous for how it daringly and effectively weaves lines of the original German in with the English translation. I was glad to see other people reading the poem attentively.


I really loved For Paul Celan: Stalks of the Night, among others. One of the "lead book" works, Black Flakes, I also found especially striking: 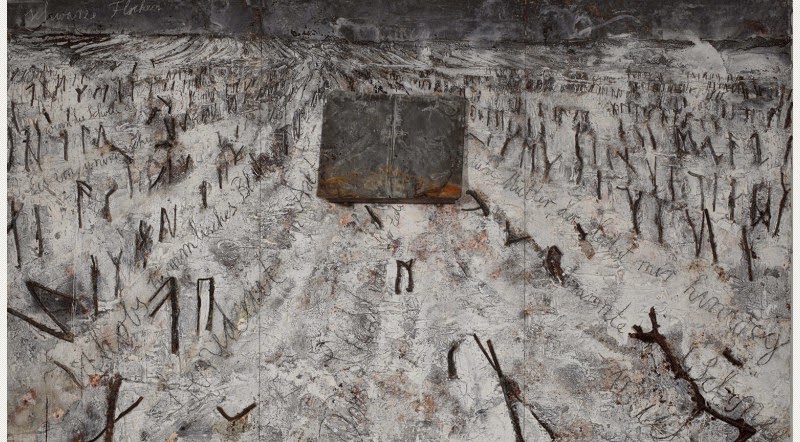 This painting is embedded with an enormous lead book and it features lines from the poem 'Black Flakes', a particularly heart-wrenching poem Celan wrote after the loss of his mother, from which he never recovered.


Autumn bled all away, Mother, snow burned me through:
I sought out my heart so it might weep, I found - oh the summer's breath,
it was like you.
Then came my tears. I wove the shawl.


I find it difficult to write about visual art, and you will find far more thorough reviews of the exhibition elsewhere. But there were a couple of things I thought particularly worth noting.

The size of many of these works is such that it has a very immersive effect. With works such as Black Flakes, I had a feeling that Kiefer had directly transferred the broken, scratchy, beautiful images in his mind directly onto the canvas. I find it very interesting to think about the pictures in others' minds, and I have sometimes asked people to describe how they "see" their consciousness, the mind's eye, the film inside your head, however you want to describe it. Mine is a mix of constant palimpsest film-reels, often with music or with words faintly (or clearly) heard, sometimes with the written words themselves. Perhaps nothing unusual, but I have a feeling that this is different for everyone. These works were so enveloping that I seemed to be seeing behind the artist's eyes. This was an especially fascinating impression because of my feeling that Celan's poems are transferring the images in his mind directly onto the page, in a way that few other poems achieve.

The other thing is that some of Kiefer's works produced a strange aural impression on me. The gallery wasn't empty and it was far from silent in there, but when I looked at some of the canvases, including the Celan works, I seemed to hear a rustling. I don't know why and I wouldn't say it necessarily represented anything, but it is very unusual for me to have aural impressions when I look at works of art. I had a confused feeling that the rustling I "heard" was something to do with the sounds of silence.

Posted by Clarissa Aykroyd at 00:09 2 comments:

Email ThisBlogThis!Share to TwitterShare to FacebookShare to Pinterest
Labels: Anselm Kiefer, John Felstiner, Michael Hamburger, Paul Celan, Pierre Joris
Newer Posts Older Posts Home
Subscribe to: Posts (Atom)
"The Stone and the Star simply IS poetry" (Anthony Wilson)
"The Stone and the Star constantly surprises with new discoveries and reminders of old favourites... Fast becoming a stalwart of the UK poetry blogging scene" (Matthew Stewart, Rogue Strands)
"Clarissa Aykroyd is doing an important thing: a poet writing about poetry, and with a spirit of awed enthusiasm" (Tim Buck, Spectral Lyre)
"Your life, with its immensity and fear,
...now bounded, now immeasurable,
it is alternately stone in you and star."
(from 'Evening', Rainer Maria Rilke,
translated by Stephen Mitchell)