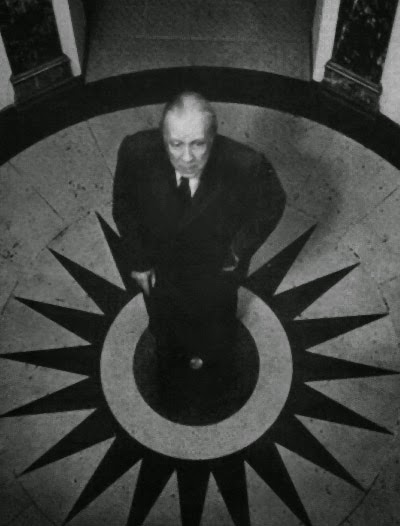 
I made a list the other day and subsequently realised that it looked like a really stupid poem. One who perfected the art of using lists in poems, however, was the great Jorge Luis Borges, as in 'That One'.


THAT ONE (Jorge Luis Borges, translated by Srikanth Reddy)


Quintessential Borges, always wandering in a labyrinth of mirrors and ephemeral walls, but also able to compress a life of shifting perspectives into a snapshot of intention.

I have spent more time speaking and reading Spanish this year than I have for the past fifteen-plus years. This has occasionally included reading Spanish poetry, both in the original and in translation - not only Borges, but Lorca, Machado, Neruda, Rafael Alberti, Octavio Paz, and various more contemporary poets. The curious discovery that I have made is that (at least for now) I seem to prefer Spanish-language poetry to French-language poetry. This is odd at least because my French is so much better than my Spanish - I can freely read French poetry without any accompanying translation, whereas in Spanish I'd have to look up at least some words and preferably look at a facing translation - but I suppose that's not all there is to it.

The English language reminds me of a Gothic cathedral with trapdoors, dead ends, endless staircases, secret entrances and exits, trompe-l'oeil and on and on. French reminds me of the flashing of a bright sharp knife. Spanish, with its rounded vowels and strong inclination towards rhyme, makes me think of drinking red wine. These are all rather facile comparisons, but maybe it's partly that I'll take wine over knives, for now.


Posted by Clarissa Aykroyd at 21:16 No comments: 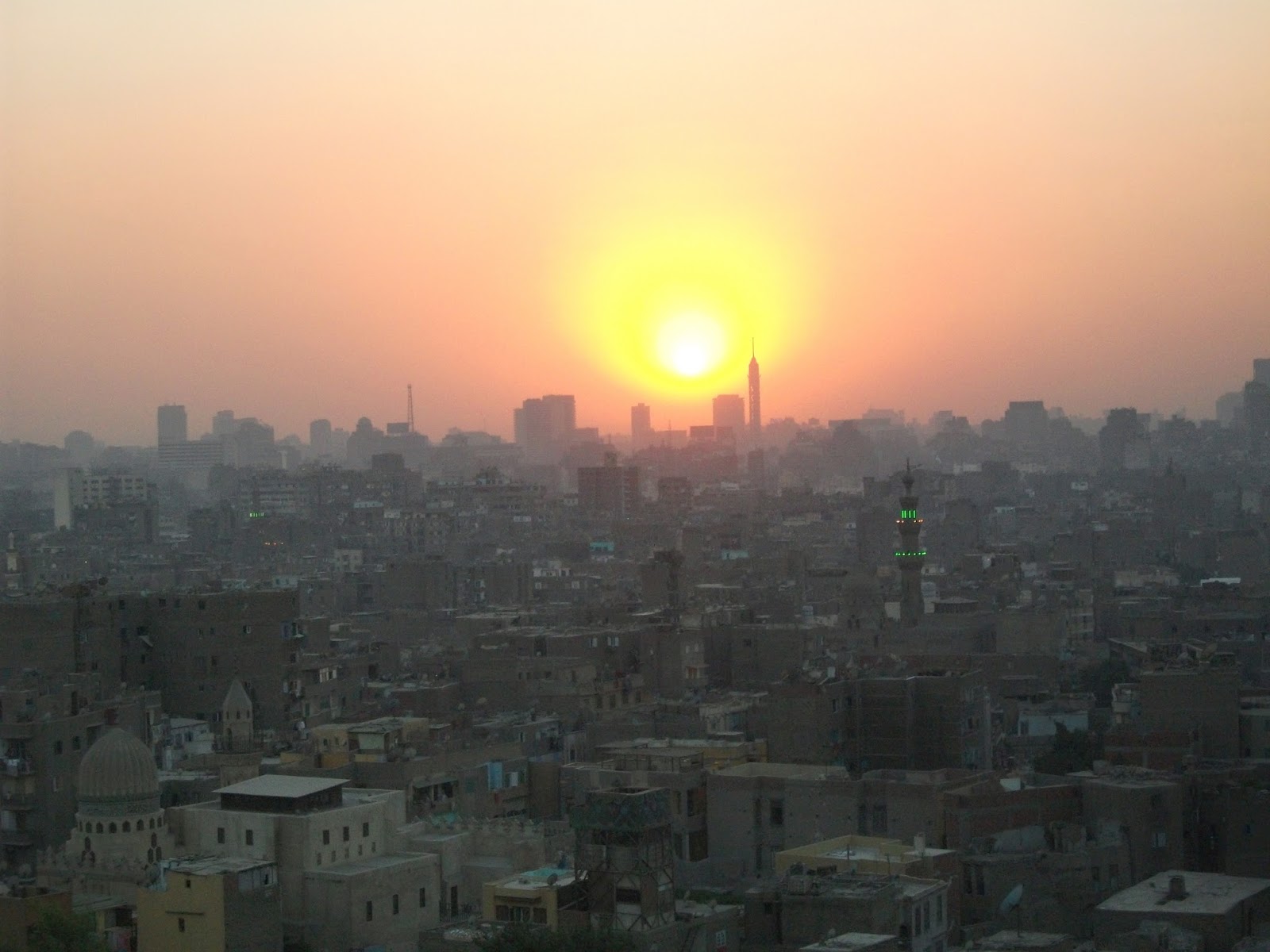 
A few days ago, Ink Sweat & Tears (who were also kind enough to publish one of my poems a week before, on National Poetry Day) published my poem 'Cairo'. You can read it here: http://www.inksweatandtears.co.uk/pages/?p=7467

I wrote 'Cairo' in 2010, a few weeks after visiting the city in late August/early September. In fact, I started to write it while I was still in Cairo, but I only hammered the images together after returning to London. I have always liked this poem and so it was good to find a home for it.

'Cairo' is quite a personal poem. Everything in it reflects something of my experience in that terrifying, exhilarating city. I wonder if to the detached reader it reads as a pre- or post-revolution poem - as it turned out, we were there only a few months before the Arab Spring started - but it is probably too abstract and personal to partake of that at all. I am tempted to wonder if the poetic part of my brain saw something coming that the rest of me didn't, but that may be a step too far. It is essentially a poem about embracing the unknown, possibly a frightening unknown.

Posted by Clarissa Aykroyd at 23:38 No comments:

Email ThisBlogThis!Share to TwitterShare to FacebookShare to Pinterest
Labels: Cairo, Ink Sweat and Tears, my own poems 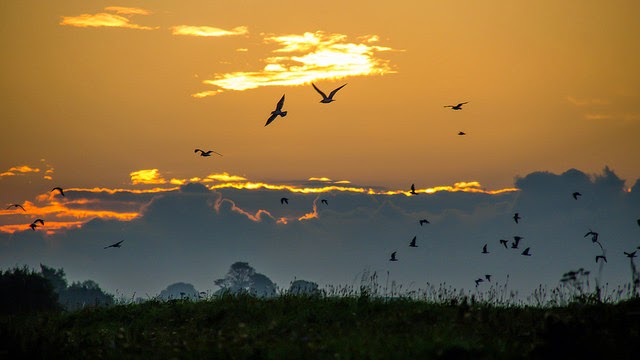 
In a literary world where words like "stunning", "powerful" and "unforgettable" get bandied about pretty freely, Alice Oswald's work deserves it more than most. It's safe to say that she is one of the most important English/British/English-language poets now working, and some would call her the most important.

On Thursday night I went to Southbank (the Purcell Room) to see Alice Oswald perform her new work, Tithonus. This was the second time I'd seen her and the first, about a year and a half ago, was a revelation as I was only slightly familiar with her work at that point and had no idea what kind of performer she was. It is more accurate to describe her appearances as "performances" - she recites by heart rather than reading, but "recital" doesn't exactly cover it. When I saw her at the T S Eliot Memorial Meeting, performing an excerpt from Memorial and shorter lyric poems, I was totally mesmerised and knew I had to read more, and hopefully see her again.

Following Oswald's radical reframing of the Iliad in Memorial, Tithonus is another look at a tragic story from Greek mythology. Tithonus was a Trojan who became the lover of the dawn. When she asked Zeus to make Tithonus immortal, she forgot to ask that he stop aging. Eventually he became unimaginably ancient and the dawn locked him in a room, where he sat babbling to himself. In this version of the story, he meets the dawn at midsummer.

I bought my ticket for this event (part of the London Literature Festival) a while ago and it came at a good time in a fairly stressful week. By the time I got to the front of the bar queue, I'd had to listen to the annoying publishing types behind me alternately raving about how marvellous Alice Oswald was when they didn't see her at Hay, and "the horror" of a new novel by a famous rock star. At that point I was more than ready to sit in the dark and listen.

The performance lasted 46 minutes, which was the length of midsummer dawn, and the first five minutes were in near-complete darkness. Oswald was accompanied by Griselda Sanderson on the nyckelharpa, an unusual instrument which I may or may not have come across in the Nordic parts of my childhood. The lights on stage came up very gradually and the effect was beautifully and subtly done to resemble dawn light.

Oswald called Memorial "a trauma" and has said how difficult it was for her to perform it. Tithonus is plainly also about trauma, in part, and an enormous tension ran through the whole performance, counterpointed by the weirdly soothing nature of half-darkness and the sounds of the nyckelharpa. Oswald holds herself totally still while performing and never falters. This had a particularly shocking effect in the passages where Tithonus really lapses into a traumatised babbling ("behind that cloth another cloth behind that cloth another cloth and then another and then another cloth and then another..."). These frantic moments in the piece contrasted with long pauses and descriptions of dawn sounds and sights, along with Tithonus' visions of himself as a sort of dogged survivor in the natural world. These had both a delicate, accurate charm and an almost unbearable sadness.


It's hard to describe an experience like this and do it justice. I bought a copy of the limited edition pamphlet of Tithonus on sale at the event, and re-reading it allows me to relive it to a certain extent. I think that it is enormously impressive even if only experienced on the page, but the combined effect of the lighting, the music and especially Oswald's performance was overwhelming.

Oswald and Sanderson signed the pamphlet for me afterwards. Oswald looked tired and drained, although she was gracious, so I didn't ask her questions, just said "Thank you, it was amazing", to which she said "Good" and smiled. Her signature was a small diffident scrawl and she said "My signature is disappearing" a bit wryly. The signature might be self-effacing, and so is the poet, despite the almost frightening power of her performances: everything is given to the poem, when she recites. But this is a voice which, in its blend of tradition, avant-garde modernity and simply great art, is likely to outlast that of most contemporary poets.

Posted by Clarissa Aykroyd at 18:12 9 comments:

I'm sure it's partly because it's a weekday (I think it's always a weekday), but it seems as though I never end up doing a whole lot on National Poetry Day. I'm still not sure if I will be attending any events tonight. However, I am wearing this top. (In case you wonder about the English, my friend who lives in Japan gave it to me. They have a deep love there for funny English on t-shirts.) 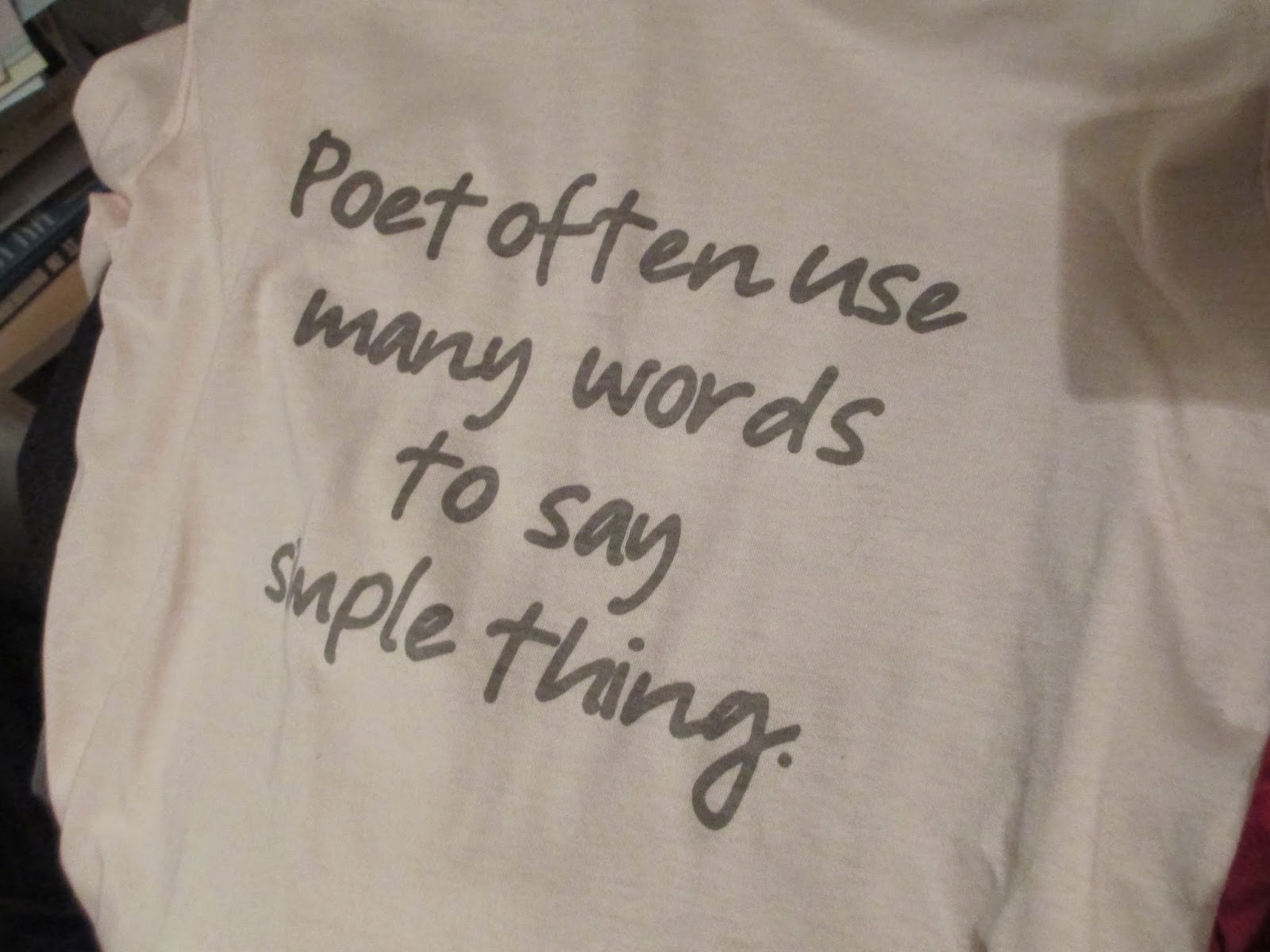 I may or may not be going to events later, but I'm delighted that I have a poem up today on the wonderful Ink Sweat & Tears, who are publishing poems for a few days on the 'Remember' theme. The poem is called 'Against Remembering' and you can read it here.

I find the 'Remember' theme quite difficult to get my head around, simply because virtually all poetry (possibly even more than other art forms) seems to deal with memory in one way or another. Presumably the theme was chosen to coincide with the 1914 centenary, but war poetry is far from being the only focus (though it is one focus): remembrance and memory are being interpreted in a wide variety of ways, including research on the nation's most-memorised poems (you can look at the #thinkofapoem hashtag on Twitter, or the work of The Poetry and Memory Project.)

Because of the breadth of the theme, I wasn't sure which other poems might be most suitable to highlight. When I thought of favourite poems, almost every single beloved poem I have ever had came to mind (and I have had many beloved poems), or else none came to mind.

Eventually, though, I thought I would post the below poems, which all deal with aspects of and approaches to memory. I thought almost right away of Edward Thomas, but again, it seems as though every one of his poems is a memory poem: sometimes about anticipating memory. This is just one of them.

Enjoy, and I hope you're having a great National Poetry Day.


The long small room that showed willows in the west
Narrowed up to the end the fireplace filled,
Although not wide. I liked it. No one guessed
What need or accident made them so build.

Only the moon, the mouse and the sparrow peeped
In from the ivy round the casement thick.
Of all they saw and heard there they shall keep
The tale for the old ivy and older brick.

When I look back I am like moon, sparrow and mouse
That witnessed what they could never understand
Or alter or prevent in the dark house.
One thing remains the same - this my right hand

Crawling crab-like over the clean white page,
Resting awhile each morning on the pillow,
Then once more starting to crawl on towards age.
The hundred last leaves stream upon the willow.

Posted by Clarissa Aykroyd at 09:34 No comments:

Email ThisBlogThis!Share to TwitterShare to FacebookShare to Pinterest
Labels: Edward Thomas, Ink Sweat and Tears, Japan, Michael Longley, my own poems, National Poetry Day, Sharon Olds, Twitter
Newer Posts Older Posts Home
Subscribe to: Posts (Atom)
"The Stone and the Star simply IS poetry" (Anthony Wilson)
"The Stone and the Star constantly surprises with new discoveries and reminders of old favourites... Fast becoming a stalwart of the UK poetry blogging scene" (Matthew Stewart, Rogue Strands)
"Clarissa Aykroyd is doing an important thing: a poet writing about poetry, and with a spirit of awed enthusiasm" (Tim Buck, Spectral Lyre)
"Your life, with its immensity and fear,
...now bounded, now immeasurable,
it is alternately stone in you and star."
(from 'Evening', Rainer Maria Rilke,
translated by Stephen Mitchell)