Louis MacNeice's 'Snow': A Poem About Being Alive 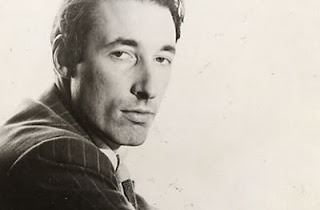 
The room was suddenly rich and the great bay-window was
Spawning snow and pink roses against it
Soundlessly collateral and incompatible:
World is suddener than we fancy it.

World is crazier and more of it than we think,
Incorrigibly plural. I peel and portion
A tangerine and spit the pips and feel
The drunkenness of things being various.

And the fire flames with a bubbling sound for world
Is more spiteful and gay than one supposes -
On the tongue on the eyes on the ears in the palms of one's hands -
There is more than glass between the snow and the huge roses.

© The Estate of Louis MacNeice. Taken from Collected Poems, published by Faber and Faber. Used by permission.

Louis MacNeice famously described his ideal characteristics for a (male) poet as follows: "I would have a poet able-bodied, fond of talking, a reader of the newspapers, capable of pity and laughter, informed in economics, appreciative of women, involved in personal relationships, actively interested in politics, susceptible to physical impressions." I have to admit that these words, along with MacNeice's admirably strong jawline and brooding gaze (see the above picture), sent me off into a reverie about Manly Men who are also poets. The cover of his Collected Poems suggests that he also looked very very fine in a fedora hat. But I digress.
MacNeice certainly was a poet who had a grasp of both the seen and the unseen. Many writers and poets lean strongly in one direction or the other, and write either with a powerful physicality, or an intense vision of the intangible. It is surprisingly rare to really achieve both. MacNeice's poems are vividly sensual, as well as insightful and varied in their emotional landscape.
'Snow' is a poem about the nature of reality, about the way things are, and about the dialogue between the conscious and the subconscious. It is a poem with an intense duality, showing the physical world as marvelous and bizarre, while also invoking what lies beyond the physical world. It is a poem about poetry, because poetry in its fullest sense is also a dialogue between the conscious and the unconscious.
This poem reminds me of the work of James Joyce, another Irishman - particularly A Portrait of the Artist As a Young Man and Ulysses. I preferred A Portrait of the Artist, finding it more accessible than Ulysses but still a remarkably effective portrayal of what it is like to be alive - the maze of thoughts and emotions, the waves of sensual impressions. With 'Snow', MacNeice is doing something similar. It is a poem about being alive. There are moments when the beauty and strangeness of what we see or hear catches at the heart and leaves a indelible impression that can last for a lifetime. This is the moment when we realise that "World is suddener than we fancy it."
As I read this poem, I can see the roses inside flaring brilliantly against the snow outside, perhaps caught in a sudden gleam from the firelight. I can taste the sweet-sour tangerine, feel the pips in my mouth, hear the small bursts and ripples from the fire. The physical intensity of this poem is second to none. It reminds me of the brief moments when I have moved out of the seashell interiors of the mind into a realm of pure sensation: at a very loud gig, drinking wine on an empty stomach and drowning in sound and light; watching sunrise over Uluru; riding a camel by moonlight into the Sahara and sensing the moment when the texture of the sand changed under its feet; running across a monumental Munich square at night in a thunderstorm. These moments don't come very often for me, but I never forget them: all part of "the drunkenness of things being various."
And yet, there is much more to 'Snow' - this is where the dialogue between the conscious and the subconscious comes in. I have read interpretations of this poem which suggest that the snow and the roses are distinctively Irish symbols - after all, James Joyce described the fall of the snow at the end of 'The Dead'. This is all possible, but what really stands out to me is that MacNeice understands how separate and yet how united things which are apparently so very different can be.
"There is more than glass between the snow and the huge roses", he writes. "Between" is a very ambiguous word. A wall can stand between two people, but so can a bridge. A window can separate, but it also joins, because you can see through it. The snow and the roses have come together, but they will never touch. This is a paradox, and it is part of the mystery of poetry. Disparate elements come together and maintain their own separate identities, but also unite to create something entirely new and extraordinary, and images from the unconscious swim to the surface to join with a more tangible reality.

Posted by Clarissa Aykroyd at 21:11