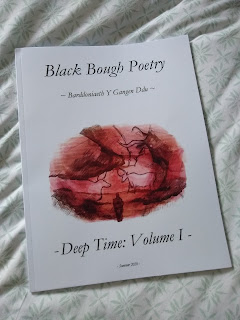 It's hard to believe that it's over two months since I last posted, but also not hard to believe. I've moved house and returned to work (though soon again to be not working, for a while), which technically are my excuses but I think that a lot of us have found it difficult to concentrate enough to write much during the pandemic, even though (in some cases) we have more time than usual.

I also feel that a lot of my blog posts have been very self-focused lately, and this one will be no exception. I'm not entirely happy about that and really feel that I need to start making more of an effort again to write about poems, rather than just what I've published lately.

That said...here we are with my updates, all of which happily do concern other poets and publishers as well.

Colin Bancroft has recently set up a new website called The Poets' Directory, where he generously and usefully posts information about journals, publishers, events and so forth in the UK and Ireland. There is also an extensive list of Collections, Pamphlets and Chapbooks by poets in the UK and Ireland, which includes my Island of Towers.  And there is a showcase of poems from these collections, which now includes my poem 'As though we lived falling out of the skin into the soul'. This website is really a remarkable resource and is well worth your time.

I've just had a new poem, 'Open Ocean', published in the latest issue of Black Bough Poetry. This special issue is Volume 1 of a theme around Deep Time, inspired by the work of Robert Macfarlane in his acclaimed book Underland, and it will soon be appearing online but for now is only available in print. You can find all the details on this website, including several wonderful reviews (one of which specifically mentions my poem!) and information on how to buy the print edition: https://www.blackboughpoetry.com/deep-time-project
I highly recommend buying the printed version, partly because of the wonderful poetry by so many poets including Paul Brookes, Ankh Spice, Matthew M.C. Smith (also the publisher of Black Bough), Jenny Mitchell and Robert Minhinnick, among others. But the artwork by Rebecca Wainwright is absolutely stunning and beautifully reproduced in this edition.

The superb iamb website, which features poetry read by the poets and which included a few of my poems in its 'wave one', has gone from strength to strength. It was shortlisted in the prestigious Saboteur Awards, and its 'wave three' is just about to appear - you can already see which poets are featured, including the likes of Aaron Kent (my publisher at Broken Sleep Books!), Jorie Graham and Victoria Kennefick. iamb's publisher Mark Antony Owen was also kind enough to nominate my poem 'I dream the perfect ride', which appears on the website, for Sundress Publications' Best of the Net 2020.

Finally, I had an acceptance which won't appear for a while but which I'm excited about. My publishers Broken Sleep Books are preparing an anthology to be published in 2021, featuring poems based on vintage video games, and I'll have a poem about a classic role-playing game in the anthology. We've already been informed that the anthology will appear in two slightly different versions/editions, with covers in Mario Red and Luigi Green...

I hope that you and yours are staying as well and safe as possible.


Posted by Clarissa Aykroyd at 22:59 No comments:

Email ThisBlogThis!Share to TwitterShare to FacebookShare to Pinterest
Labels: Aaron Kent, Black Bough Poetry, Broken Sleep Books, Colin Bancroft, iamb, Island of Towers, Jorie Graham, my own poems, Robert Macfarlane, The Poets' Directory
Newer Posts Older Posts Home
Subscribe to: Posts (Atom)
"The Stone and the Star simply IS poetry" (Anthony Wilson)
"The Stone and the Star constantly surprises with new discoveries and reminders of old favourites... Fast becoming a stalwart of the UK poetry blogging scene" (Matthew Stewart, Rogue Strands)
"Clarissa Aykroyd is doing an important thing: a poet writing about poetry, and with a spirit of awed enthusiasm" (Tim Buck, Spectral Lyre)
"Your life, with its immensity and fear,
...now bounded, now immeasurable,
it is alternately stone in you and star."
(from 'Evening', Rainer Maria Rilke,
translated by Stephen Mitchell)