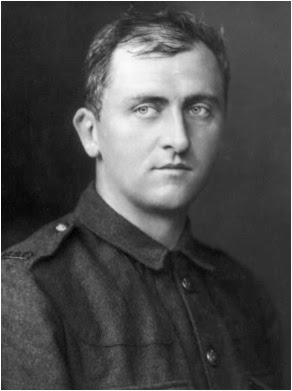 I sometimes wonder why I don't come across more appreciation of and commentary on the Imagist poet TE Hulme (1883-1917). The answer is probably that he wrote only a small number of poems (around 25), and just a few were published during his lifetime. He is probably better known as a literary critic and a philosopher.

He established the Poets' Club and the School of Images (the latter including Ezra Pound), both of which explored new directions in English poetry. Hulme had a colourful life and was known as a strong (not always appreciated) personality. He died in World War I, in West Flanders, blown up by a shell he didn't see coming (those around him did, and threw themselves to the ground.) He was 34.

TE Hulme isn't exactly a household name. He has always seemed to me to occupy a particular niche. It is thought that if he had lived, he could have become one of the most influential literary figures of the century, but he didn't have a chance beyond what he accomplished before his death. I just love his poems.

Most of Hulme's poems were only a few lines long. I love short poetry (my own poems average about 10-14 lines - more than 20 lines is a long poem for me) and I don't think it gets enough credit. A poem leaving a lasting impression in six or twelve lines may stay with a reader forever. Hulme's poems are clear-eyed, balanced between warmth and dispassion, wistfully playful and very precise. I can't ask for much more in a poem.


A touch of cold in the Autumn night -
I walked abroad,
And saw the ruddy moon lean over a hedge
Like a red-faced farmer.
I did not stop to speak, but nodded,
And round about were the wistful stars
With white faces like town children.


'Autumn' reminds me a little of Tolkien, to the extent that I wonder if the author of The Hobbit and The Lord of the Rings might have been influenced by it. Perhaps because of that, it makes me think of much of the writing I enjoyed as a child: a mix of comfort, adventure and a slight eeriness.


'The Embankment' is especially evocative to me as it's a part of London I know well. The 'flash of gold heels' seems to spark, an irony considering the man's search for warmth. It's a whimsical, sad and (again) faintly eerie poem, and it always makes me think of how there are still so many homeless people looking for shelter around Waterloo and Embankment.

Hulme isn't really known as a "war poet", despite his dates and his death. But he left this poem on a return to England from the front. It was probably transcribed (edited?) by Ezra Pound, but there seems little doubt as to its authorship. The final lines leave me stunned. Indeed, the 'mind is a corridor' under trauma. He said it perfectly.

(Abbreviated from the Conversation of Mr TEH)


Over the flat slopes of St Eloi
A wide wall of sand bags.
Night,
In the silence desultory men
Pottering over small fires, cleaning their mess-tins:
To and fro, from the lines,
Men walk as on Piccadilly,
Making paths in the dark,
Through scattered dead horses,
Over a dead Belgian's belly.

The Germans have rockets. The English have no rockets.
Behind the line, cannon, hidden, lying back miles.
Beyond the line, chaos:

My mind is a corridor. The minds about me are corridors.
Nothing suggests itself. There is nothing to do but keep on.

Posted by Clarissa Aykroyd at 23:08 No comments:

Ivan Lalić: The Spaces of Hope 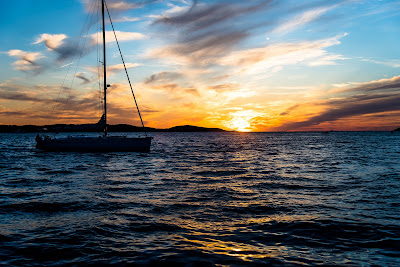 
Somehow, although I have been enjoying his work a great deal over the last couple of years, I have failed to write anything about the Yugoslavian poet Ivan Lalić.


Lalić's years were 1931 to 1996, which means that at the start and finish of his life he lived through some of the most tragic times in his region's history. He was from Belgrade, his wife was Croatian and he wrote in Serbo-Croat. His main English translator was Francis R Jones, and Charles Simic has also translated him.

Lalić's poems are so beautiful - even when taken out of their original language - that they make me wonder, helplessly, why all poetry can't be like this. It seems as though he achieves a perfect balance of formal beauty and meaning, of memory and presentness in the senses. He saw himself as a Mediterranean, more than a Balkan, poet, and his works often touches Byzantine themes, Greece and Italy. And there is a shadow over his work of the losses he experienced as a child in World War II.

I haven't spent quite enough time with Lalić's work to engage with it really deeply, but having read quite a few of his poems, so far I have loved 'The Spaces of Hope' more than any other. You can read it here:

This is a poem whose images are obviously informed in a painfully intimate way by personal memory. The image of "wind in a wild vine" at Kanfanar is particularly piercing. But there is a generosity to the poem that leaves it wide, wide open, like a window onto the sea. The spaces of hope, Lalić says, aren't patterned into "a system of miracles". But whatever our life experiences, our beliefs or worldview, the poem invites us to find comfort in our own spaces of hope. I recognise the feelings conjured up by this poem.

You can read more of Lalić's work on the new Modern Poetry in Translation microsite, set up to commemorate the first issue of this great journal: http://modernpoetryintranslation.com/poet/ivan-lalic/

Also on this site, you can read this wonderful poem, 'Renderings', by Ian Duhig, in tribute to Lalić's work: http://modernpoetryintranslation.com/response/renderings/

Posted by Clarissa Aykroyd at 21:31 No comments:

Email ThisBlogThis!Share to TwitterShare to FacebookShare to Pinterest
Labels: Charles Simic, Francis R Jones, Ian Duhig, Ivan Lalić, Modern Poetry in Translation, translation
Newer Posts Older Posts Home
Subscribe to: Posts (Atom)
"The Stone and the Star simply IS poetry" (Anthony Wilson)
"The Stone and the Star constantly surprises with new discoveries and reminders of old favourites... Fast becoming a stalwart of the UK poetry blogging scene" (Matthew Stewart, Rogue Strands)
"Clarissa Aykroyd is doing an important thing: a poet writing about poetry, and with a spirit of awed enthusiasm" (Tim Buck, Spectral Lyre)
"Your life, with its immensity and fear,
...now bounded, now immeasurable,
it is alternately stone in you and star."
(from 'Evening', Rainer Maria Rilke,
translated by Stephen Mitchell)