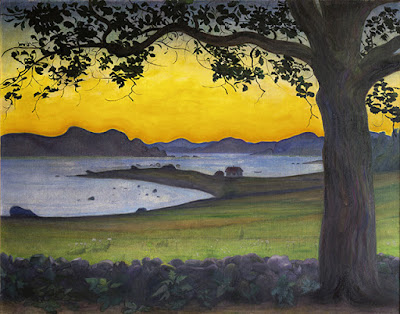 
At the top of the house the apples are laid in rows,
And the skylight lets the moonlight in, and those
Apples are deep-sea apples of green. There goes
A cloud on the moon in the autumn night.

A mouse in the wainscot scratches, and scratches, and then
There is no sound at the top of the house of men
Or mice; and the cloud is blown, and the moon again
Dapples the apples with deep-sea light.

They are lying in rows there, under the gloomy beams;
On the sagging floor; they gather the silver streams
Out of the moon, those moonlit apples of dreams,
And quiet is the steep stair under.

In the corridors under there is nothing but sleep.
And stiller than ever on orchard boughs they keep
Tryst with the moon, and deep is the silence, deep
On moon-washed apples of wonder.


I rediscovered this poem the other day, in part thanks to the serene First Known When Lost blog. More than just a simple poem of nature or pastoral beauty, 'Moonlit Apples' seems to me a kind of ode to interconnectedness, almost a microcosm of environmentalism. The apples are at the top of the house, the moonlight touches them, they now resemble "deep-sea apples of green". The apples, mysteriously, partake of the moon, and thus also partake of the sea. Everything affects everything else.

The swaying rhythm of the poem, and the countdown of syllables per line in each stanza, also evoke the "deep-sea light" on the apples, the stillness that is never entirely still. There's a silver-green peace about it which belies the fact that it shows a hyper-real vision of the apples. It's sort of hallucinogenic and soothing at the same time.

Posted by Clarissa Aykroyd at 23:44 No comments:

In Paris with Paul Celan (and the usual suspects)


A couple of weeks ago - only a few days after returning from a three-week visit to Canada - I went to Paris for the weekend. This year the IIHF World Championship (ie. ice hockey) was in Paris and Cologne, and I was there to meet up with my brother Lucas, who writes articles for the IIHF website.

Paris is one of my adored cities, and every visit there is different. It was strange to be going to a couple of hockey games while there (this time I got to see Slovenia-Belarus and Canada-Switzerland. Canada managed to lose to Switzerland!). At the same time, there always seem to be some common threads, often involving food, art and books. It is Paris, after all.

Besides spending time with my brother, my mission on this particular trip was to go to the Gibert Jeune bookshop on Place St-Michel and to find a few French poetry books. I was looking for Benjamin Fondane's Le mal des fantômes in particular, and possibly something by Yves Bonnefoy and Guy Goffette. This mission was accomplished in a matter of minutes when I found all of the above, but then I also ended up buying a French Sherlock Holmes pastiche (Einstein et Sherlock Holmes) by Alexis Lecaye. These things happen.

On the Sunday, my brother and were walking in the Marais (and, incidentally, avoiding the passation de pouvoir of the new president Emmanuel Macron, which would no doubt have been interesting to see but all the security was a bit off-putting.) On Rue Rambuteau, we stopped in at Les Cahiers de Colette (Colette's Notebooks), a lovely and distinctly intellectual bookshop. I'd say intellectual even by French standards - I find that in France there tends to be an underlying assumption of a certain intellectual level, which is perhaps one reason why some publishers tend not to include blurbs on their books. Editions Gallimard, who published a couple of my poetry purchases, is one of these. They just know you want to buy Yves Bonnefoy and Guy Goffette.

Anyway, in Les Cahiers de Colette I also saw these: 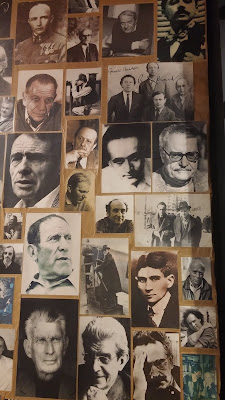 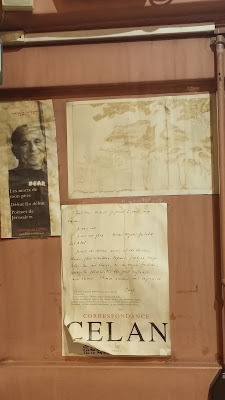 The second photo shows a reproduction of one of Paul Celan's letters. In the montage of faces, his jumped out at me right away. (Of course I recognised Beckett and Kafka, and found that Paul Eluard and André Breton were there too. There are others I feel sure I should know - feel free to identify them!)

I always feel close to Celan, somehow, even when I'm not actively reading him. It is about 20 years since I first read his work, and the writers I encountered in my teenage years have tended to have a particularly strong effect on me. I started reading him more actively about seven years ago, when I was also undergoing some particularly intense moments, so I think that Celan was really sealed into my life. But in Paris, I feel a little closer to him. As well as the knowledge that he walked those streets, there's a feeling that he is more remembered there.

Posted by Clarissa Aykroyd at 21:16 4 comments: 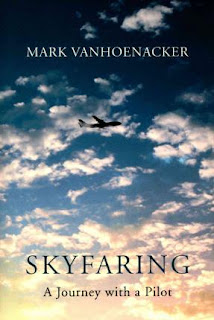 There are times when I'm not reading a great deal of poetry (or, less than at some other times) but it still finds its way into my life. (It always does that.) A recent example was when I read the book Skyfaring: A Journey With a Pilot by Mark Vanhoenacker.

Flying isn't particularly my favourite subject to read about. I fly at least a couple of times a year, usually more, but have struggled with it for years to the extent that each flight is anywhere from uncomfortable to a major ordeal. Oddly enough, this was partly what impelled me to read Skyfaring. The description attracted me: an experienced pilot evokes the perspective shifts, the emotional challenges and rewards, the friendships and unusual messages, and the pure beauty of flying.

I really wasn't disappointed with the book and I would certainly recommend it for a nervous flyer, at least one who can bear the thought of reading about the experience they dread. There is such an air of wonder and serenity about it that it had a noticeably calming effect on me (and yes, I did read parts of it on long plane flights a few weeks ago, between London and the west coast of Canada.) The writing is exquisite. I particularly enjoyed some of Vanhoenacker's descriptions of night flying (not my favourite time to be flying, due to a weird psychological cocktail of reasons.) Such as this:


In the high night...are many phenomena we cannot see so clearly, if we see them at all, when the sun is up. There are nameless ships of cloud that seem to sail best under a bright moon. There are vast lobes of lightning, flashbulbing out from deep within the grey matter of distant equatorial thunderstorms, while on the windowpanes St Elmo's fire, a kind of static that appears in startling bursts of flat blue veins, flickers like Prufrock's 'nerves in patterns on a screen'.


And...there's the other reason why I enjoyed Skyfaring. It opens with, as epigraph, the latter half of one of the poems in Derek Walcott's Midsummer sequence, a poem that actually is about flying (and landing):


It comes too fast, this shelving sense of home -
canes rushing the wing, a fence; a world that stands still as
the trundling tires keep shaking and shaking the heart.


Vanhoenacker obviously has a rich appreciation for literature: as well as Walcott and TS Eliot, Philip Levine, Robert Frost, 'Dark Night of the Soul' by St John of the Cross, all appear along with other poems and poets. A book well worth reading, then; but it did make me think that to enjoy flying, you really have to be a pilot - or at least sitting in business class.

Email ThisBlogThis!Share to TwitterShare to FacebookShare to Pinterest
Labels: Canada, Derek Walcott, flying, Mark Vanhoenacker, Philip Levine, Robert Frost, St John of the Cross, T S Eliot
Newer Posts Older Posts Home
Subscribe to: Posts (Atom)
"The Stone and the Star simply IS poetry" (Anthony Wilson)
"The Stone and the Star constantly surprises with new discoveries and reminders of old favourites... Fast becoming a stalwart of the UK poetry blogging scene" (Matthew Stewart, Rogue Strands)
"Clarissa Aykroyd is doing an important thing: a poet writing about poetry, and with a spirit of awed enthusiasm" (Tim Buck, Spectral Lyre)
"Your life, with its immensity and fear,
...now bounded, now immeasurable,
it is alternately stone in you and star."
(from 'Evening', Rainer Maria Rilke,
translated by Stephen Mitchell)