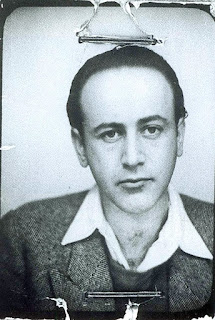 November 2020 is the centenary of Paul Celan's birth, and in 2020 it is also 50 years since he died. I have often written about him in this blog, but it has been lovely to see him widely commemorated this year and especially in this past month, even if many events had to be moved online due to the pandemic. And this has its advantages - in the past couple of weeks I attended a couple of excellent Celan events from Deutsches Haus in New York, despite living in the UK.
While Celan's poetry is often considered difficult, he has managed to gain legions of readers who haven't been put off by this discouraging label and who often (like myself) can't read him in German, the language in which he wrote most of his poetry. Sometimes if I'm looking at Twitter late at night (a bad habit) I find myself searching to see who's tweeting about Celan all over the world (a good habit, or at least a better habit). English is by no means the dominant language, and I'm not sure German is either - he seems particularly popular in Spanish and Turkish.
Celan's identity is very difficult to pin down in any way. He was Jewish, but that isn't necessary the dominant influence on his work (although it is massive). He was German-speaking but not German. He was Romanian, but his hometown of Chernivtsi is now in Ukraine. His greatest poetic work came from years in Paris, and he worked as a translator with many languages. All of this has probably succeeded in making him more universal. His poems are like radio transmissions directly from his mind and heart, in an new language, untranslated, somehow and mysteriously unmediated in a way that is different from most other poetry. The silences, gaps and elisions in his poems are also like the moments when the radio waves break up - but they are entirely deliberate, an essential part of the work of art, at times the most essential.
My love for Celan's work has sometimes puzzled me. He is not particularly like any other poet or writer that I love. The fact is, though, that he is simply not much like any other poet or writer at all. While his work evidently poses many extreme difficulties for translators, there is no question that the emotions carry across and pierce through. Celan's poems can seem surreal or abstract but they often refer to very specific people, places, events. To know him fully, perhaps these need to be unpicked to a level most of us never will reach. And yet Celan himself said that his work could be understand if readers would simply engage and read the poems again and again. At one of the events I attended, the author Paul Auster said that Celan's intellectual prowess was immense but that the defining factor and what has made his work so loved was the spirit, the emotion that burns from him onto the page. The Celan expert Christine Ivanovic said that even when you engage deeply with Celan and read him again and again, there will be texts that you don't understand, but you still live with the words. This has been entirely my experience. I have lived with Celan since my late teens (which seems to have been a crucial moment at which many enthusiasts and experts encountered him.) I love and admire translations by dedicated translators such as Pierre Joris and John Felstiner, but in English Celan truly lives in me through the work of translator and poet Michael Hamburger, because that was the encounter from which everything else followed. There is always an encounter with Celan - there are many encounters and they persist and can last for a lifetime. He once wrote "I see no difference between a handshake and a poem," and this despite the extraordinarily personal and often mysterious nature of his work.
In some way I think about Paul Celan and his words every day. I feel as though a small, dedicated area of my mind (or perhaps more accurately, my heart) is occupied with his poetry all the time, even if I may not have read him for a while. He influences my own poetry and beyond that, he takes me to a Celanworld of such unique specificity and beauty that it hurts. His words are a place where no one else had ever gone and where we can all go now, across the threshold. "Louder whirring. Nearer glow. This world and the other." (from 'Under a Picture', translated by Michael Hamburger)
Here are a few of his poems to read if you haven't before or if you wish to revisit him.
Death Fugue (translated by AZ Foreman)
Homecoming (translated by Michael Hamburger)
All Souls (translated by Michael Hamburger)
Corona (translated by Pierre Joris)
Aspen Tree (translated by Pierre Joris)
Image: Paul Celan's passport photo, 1938. Author unknown.
Posted by Clarissa Aykroyd at 21:41 No comments:

My poetry reading with Chris Kerr and Nisha Bhakoo on Thursday, 19 November

On Thursday 19 November (yes, tomorrow!) at 7 PM GMT (UK time), I will be reading my poetry on Zoom with Chris Kerr and Nisha Bhakoo, both poets who are also published by Broken Sleep Books.

Each of us plan to read for 10-15 minutes and it would be wonderful if you could join us from any time zone in the world that permits it.

The reading is free, but you need to register through Eventbrite and then you will receive the Zoom details to join the event.

Posted by Clarissa Aykroyd at 20:13 No comments:

Email ThisBlogThis!Share to TwitterShare to FacebookShare to Pinterest
Newer Posts Older Posts Home
Subscribe to: Posts (Atom)
"The Stone and the Star simply IS poetry" (Anthony Wilson)
"The Stone and the Star constantly surprises with new discoveries and reminders of old favourites... Fast becoming a stalwart of the UK poetry blogging scene" (Matthew Stewart, Rogue Strands)
"Clarissa Aykroyd is doing an important thing: a poet writing about poetry, and with a spirit of awed enthusiasm" (Tim Buck, Spectral Lyre)
"Your life, with its immensity and fear,
...now bounded, now immeasurable,
it is alternately stone in you and star."
(from 'Evening', Rainer Maria Rilke,
translated by Stephen Mitchell)