My latest poetic obsession is Benjamin Fondane, and it looks as though it could be a serious one. Here's the story - followed by my translation of his poem 'Fallen Snow'.

In March, I went to London Book Fair for about a day and a half. It was for work, and I attended talks on digital advancements, browsed the full-colour book publishers, and met work contacts. I also had a bit of time to just wander round. One of the things that fascinates me about book trade fairs - and it's something you get to experience if you're there as a visitor with a certain amount of freedom, rather than working as an exhibitor - is the sheer breadth of what falls under "book". These days there's a lot of talk about "content" (which is kind of fascinating and annoying at the same time), but even beyond digital media, exhibitors at LBF range from the immense trade publishers (Penguin Random House, etc) all the way to publishers in the most niche areas imaginable (someone had a stand dedicated exclusively to a book about a certain financial establishment's fraudulent acts. It was giving off a bit of a creepy vibe and a lot of people were eyeing it nervously.)

Poland was the market focus this year, and generally I love wandering around the international publishers. While I was doing so, this caught my eye over at Romania's stand: 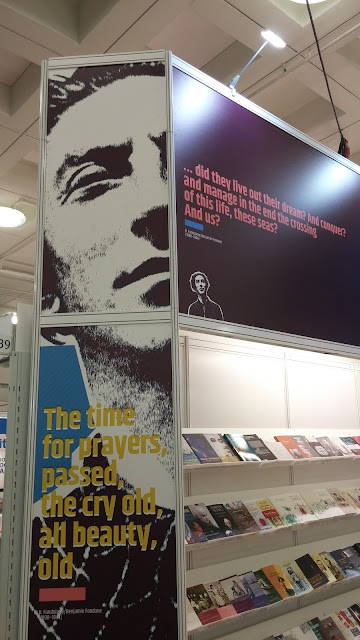 A few thoughts went through my mind: "Beautiful lines", "Presumably a poet", and "What a wonderful face he has." I looked at the name: Benjamin Fondane (or Fundoianu in Romanian), which told me nothing, not that I could recall. I only had a minute to spare, so I took this photo as an aide-memoire and then moved on.

I looked up Benjamin Fondane later. It turned out that the Romanians at LBF were focusing their exhibition on Fondane in 2017, and I wished I'd asked someone there about him. As far as Fondane's life, I recommend the Wikipedia entry, which has to be one of the most comprehensive I have ever read about anybody (or about a non-English-language poet, certainly).

The barest essentials of his life are this: He was born in Romanian Moldavia in 1898, a Jewish Romanian poet, critic and philosopher who eventually moved to Paris and who also worked in film and theatre. His philosophy was strongly influenced by the Russian existential philosopher Lev Shestov, and although he was associated with the Surrealists, he later distanced himself from them. He was an accomplished poet, writing in both Romanian and French. Fondane's wide circle of friends and associates included philosopher Emil Cioran and sculptor Constantin Brâncuși. In 1944 he was deported to Auschwitz where, along with so many others, he was murdered in a gas chamber.

The impression I received from his biography was one of great vitality, energy and curiosity - in fact, one of those lives that seem impossible to snuff out. When I started looking up his French poems, I had an experience which is rarer to me than you might think. I have read quite a few poets who send me off into raptures (and a lot more who don't, at all). But it's rare for me to read even poetry in English where I have a "love at first sight" experience. It usually takes a little longer. Fondane wrote in French, and while I am fluent in French and have read a lot of French literature, I have to work harder (and listen harder) with it. The "love at first sight" seldom, if ever, happens to me with French literature. And yet, pretty much the second I started reading Fondane's poetry - in French, not in translation - it happened. I knew right away that I had to try translating his poems.

Fondane hasn't been very widely translated into English. He is much more famous in France. The New York Review of Books has recently released a couple of volumes with English translations of some of his poems, and of some of his philosophical essays (the latter under the wonderful title Existential Monday). But I expect, in the next while, to be doing some work on his poems. When I started reading them, I heard his voice so powerfully that I knew I could translate his work. The hearing of the voice (so to speak) is, to me, the strongest indication that I should try to translate a certain poet.

Here's my translation of 'Fallen Snow' ('Neige tombée'), followed by the original poem. And, please watch this space.

Fallen snow, fallen snow in the century
far, far from me, in the night of my sixteenth year.
Have I forgotten you, strange and savage youth –
hardly more real than the sixteenth century?

Sweet twilight! Are you there in the corner of my room?
Clear wood fire, is that you burnishing my skin?
Yes, the seasons have passed; ah yes, the Decembers
roll their hollow wheels on the cobblestones.

Fallen snow! Remember! You were travelling in a book.
Bright young girls came in, tasting of salt –
dead since then, since my desire was drunk!
Who would have thought that only it would last?

Sweet twilight! Later on the quays, the piers,
so many times we wept our farewells!
Yes, you still rest on those young shoulders,
stubborn heart, like wine turned old.

Fallen snow! In the hearth, now, other kindling
is burning! But it’s still the same song.
Truly – I wished in vain, for a kiss from your mouths,
to go down to Hell and pay the cruel ransom.

Sweet twilight! The snow has fallen. This is the century,
the wind, time and savage blood.
Far, far from me: where are you, my sixteenth year,
hardly more real than the sixteenth century?

Posted by Clarissa Aykroyd at 19:54 2 comments:

Mandelstam and Tchaikovsky at Pushkin House 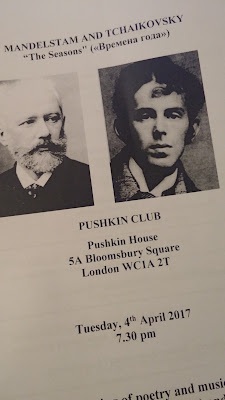 Last week I went to an event at Pushkin House, the Russian cultural centre on Bloomsbury Square, not far from the British Museum. I've seen some very interesting events advertised there but it was the first time I'd managed to go. I couldn't miss an event combining the talents of Tchaikovsky and Osip Mandelstam.

I'm a big fan of Mandelstam's poetry, but as a non-Russian-speaker I can only enjoy it in translation, and I have heard that his poetry is actually very difficult to translate. I've certainly noticed that translations of his work can vary so widely that it makes me a little worried about accuracy (insofar as accuracy has to balance with other factors when translating poetry.) I thought this would be a good opportunity to have a sonic Mandelstam experience, hearing the poems in their original language. And I love Tchaikovsky.

The carefully curated program consisted of readings of poems, often corresponding to a certain time of year, alternating with Tchaikovsky piano pieces reflecting the seasons. Famous poems such as 'Alone, I look into the face of the frost' and 'Silentium' alternated with equally beautiful poems I wasn't yet familiar with. The program included English translations, which was perfect. Alla Gelich recited passionately and Nadia Giliova played beautifully.

Mandelstam's poems are very sensual and often playful, also extraordinarily intense. They often zoom in on details almost insignificant to the naked eye - the drops of sea spray, the glow of a wine jug - and invest them with hyper-significance. The poems went very well with the works of Tchaikovsky, who was an inspiration to the poet and whose music is passionate and story-telling.

For this time of year, I loved these lines:

Against a sky of pale-blue enamel,
The shade that only April can bring,
The branches of the birch-trees swayed
And, imperceptibly, it was evening.

Posted by Clarissa Aykroyd at 22:57 No comments:


I tried to imagine what my own presence in the poetry world would look like if it were a place. The image that came to mind was one of the stone benches carved into the wall by the river in Battersea Park. So, here's an update from my stone bench by the Thames in Battersea Park.

To accompany their latest poets-in-residence-in-gardens program, Mixed Borders, the Poetry School released an e-pamphlet of poems from the 2016 program, in which I took part. A couple of my poems are in this pamphlet and you can find it here.

Josephine Corcoran's lovely online poetry journal And Other Poems has published two of my Sherlock Holmes poems, 'Holmes in Florence' and 'Sherlock Holmes in Antarctica'. You can read them here.

Finally, I wanted to mention what I did on World Poetry Day, which was on 21 March. It's a UNESCO event which doesn't get a lot of attention in the UK compared to National Poetry Day later in the year. However, as they've done in other years, the Austrian coffee company Julius Meinl was running their own World Poetry Day endeavour, Pay with a Poem. A lot of cafes and restaurants in continental Europe were participating, but only a few in London. To my great pleasure, though, one of the cafes where I sometimes go for lunch at work, Manna Dew, was taking part. So I got my free coffee, and this is what I came up with (click on the photo to enlarge): 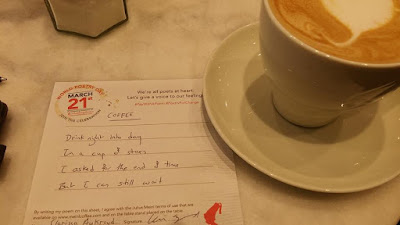 In the evening on World Poetry Day I also went to the launch of the latest issue of Modern Poetry in Translation, including wonderful readings by Denise Riley and Don Mee Choi. You can listen to a podcast of the event here: http://www.mptmagazine.com/article/podcast-denise-riley-and-don-mee-choi-read-at-the-launch-of-mpt-the-blue-vein-88/

Posted by Clarissa Aykroyd at 11:51 2 comments:

Email ThisBlogThis!Share to TwitterShare to FacebookShare to Pinterest
Labels: And Other Poems, Denise Riley, Don Mee Choi, gardens, London Parks and Gardens Trust, Modern Poetry in Translation, my own poems, Poetry School, Sherlock Holmes, World Poetry Day
Newer Posts Older Posts Home
Subscribe to: Posts (Atom)
"The Stone and the Star simply IS poetry" (Anthony Wilson)
"The Stone and the Star constantly surprises with new discoveries and reminders of old favourites... Fast becoming a stalwart of the UK poetry blogging scene" (Matthew Stewart, Rogue Strands)
"Clarissa Aykroyd is doing an important thing: a poet writing about poetry, and with a spirit of awed enthusiasm" (Tim Buck, Spectral Lyre)
"Your life, with its immensity and fear,
...now bounded, now immeasurable,
it is alternately stone in you and star."
(from 'Evening', Rainer Maria Rilke,
translated by Stephen Mitchell)