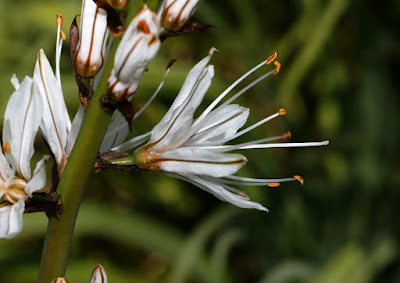 At the end of 2018, I leave you with 'Mythistorema' by Derek Mahon (this is actually a 2017 poem, but who cares?) Mahon has also, this year, released Against the Clock (Gallery Press), which I look forward to reading: he's one of my most admired poets.

The title of 'Mythistorema' merges "myth" and "history", and for readers of poetry it may suggest the title of a sequence by George Seferis. To me, this poem was immediately and most powerfully a callback to what may be Mahon's greatest poem, 'A Disused Shed in Co. Wexford'. I then realised that a line from the Seferis sequence actually appears at the start of 'A Disused Shed in Co. Wexford' ("Let them not forget us, the weak souls among the asphodels") - linking all of these poems together.

It's quite moving how the aging Mahon, resurrecting the opening image of the mine from 'A Disused Shed' into 'Mythistorema', climbs down into his own oeuvre and personal myths, his memory, and his life - then admitting as wryly as ever: "We try to grasp it but the past dies back/to a grainy line-up of old photographs." There was more pain and anger at the heart of 'A Disused Shed', which finally cries out against genocide, mass death and the failure of human endeavour. Here, Mahon seems to conclude more resignedly: "Now everyone/whispers together in the dim fields below".

Photo of asphodel by Ligurian Photoflora. Used under Creative Commons license
Posted by Clarissa Aykroyd at 06:47 No comments:

Anyway, this is to let you know that poet and blogger Matthew Stewart (who writes the Rogue Strands blog) kindly included me once again on his year-end list of Best UK Poetry Blogs, for 2018. I've made it on to this excellent list for a few years now - readers of UK poetry blogs, and hopefully poetry blog readers in a few other countries, know that this is a must-read or at least must-browse list. So I was very pleased to be included again. Of course, this should also serve as an incentive to blog a little more often than I've tended to do lately.

You can read the full lineup here: https://roguestrands.blogspot.com/2018/12/the-best-uk-poetry-blogs-of-2018.html


Posted by Clarissa Aykroyd at 06:17 No comments:

Email ThisBlogThis!Share to TwitterShare to FacebookShare to Pinterest
Labels: blogging, Matthew Stewart, Rogue Strands
Newer Posts Older Posts Home
Subscribe to: Posts (Atom)
"The Stone and the Star simply IS poetry" (Anthony Wilson)
"The Stone and the Star constantly surprises with new discoveries and reminders of old favourites... Fast becoming a stalwart of the UK poetry blogging scene" (Matthew Stewart, Rogue Strands)
"Clarissa Aykroyd is doing an important thing: a poet writing about poetry, and with a spirit of awed enthusiasm" (Tim Buck, Spectral Lyre)
"Your life, with its immensity and fear,
...now bounded, now immeasurable,
it is alternately stone in you and star."
(from 'Evening', Rainer Maria Rilke,
translated by Stephen Mitchell)