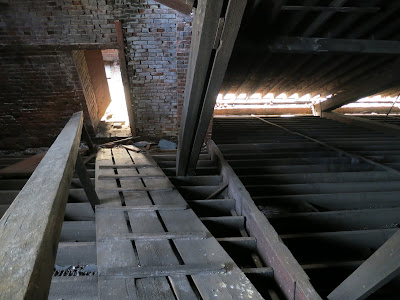 Posted by Clarissa Aykroyd at 21:33 No comments:

Rodin and Rilke at the British Museum


I went to the Rodin and the art of ancient Greece exhibition at the British Museum (on until 29 July). It's almost impossible to go wrong with an exhibition like this: it's Rodin, it's classical Greek art, it's Rodin's history with the British Museum...what's not to like? To my surprise, I also found that the words of Rainer Maria Rilke were everywhere. 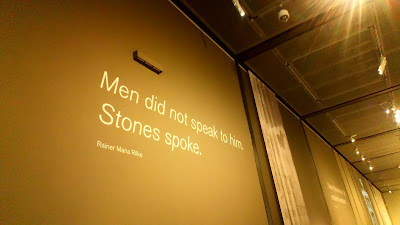 Rilke went to Paris in 1902 to write a monograph on Rodin, and subsequently became his secretary for a time and his friend. (You can read a fascinating excerpt from You Must Change Your Life: The Story of Rainer Maria Rilke and Auguste Rodin by Rachel Corbett, here.) All over the exhibition, writeups on the artwork were accompanied by Rilke's words on Rodin, often on the specific piece. Sometimes they made up the entirety of the writeup: this was especially moving where Rilke had written about the intensely emotional The Burghers of Calais. No one, it seems, has been able to improve on Rilke's words. This increased immeasurably my enjoyment of an already marvelous exhibition.

Here's what Rilke said on the figure of Pierre de Wissant in The Burghers of Calais:

He created the vague gesture of the man 'passing through life'... As he advances he turns back, not to the town, not to the weeping people, nor to those accompanying him. He turns back to himself ... his hand opens in the air and lets something go, somewhat in the way in which we set free a bird. He is taking leave of all uncertainty, of all happiness still unrealised... This figure, if placed by itself in some old shady garden, would make a monument for all who have died young. (Rainer Maria Rilke, 1902. Translator not named) 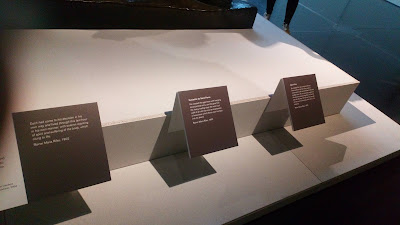 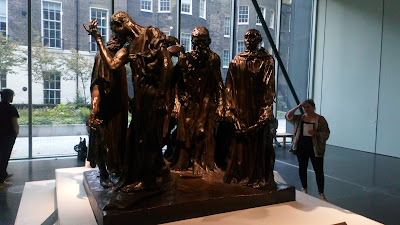 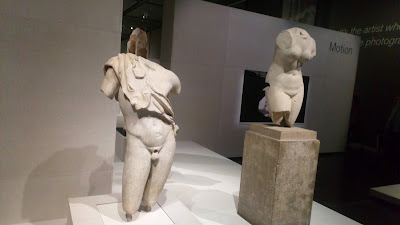 Posted by Clarissa Aykroyd at 20:12 2 comments:


A thoughtful review of my poem 'Carousel', recently published by Strange Horizons, appeared on Charles Payseur's Quick Sip Reviews, and you can read it here: https://quicksipreviews.blogspot.com/2018/06/quick-sips-strange-horizons-06182018.html

In translation news, I joined the Poetry Translation Centre workshop a few weeks ago to help translate an Arabic prose poem, 'Savannah' by Amjad Nasser. I was really pleased that a few sixth-formers (that's high school...ish...for the North Americans) joined the workshop with their teacher, made interesting contributions, and evidently enjoyed it.

Posted by Clarissa Aykroyd at 01:00 No comments:

Email ThisBlogThis!Share to TwitterShare to FacebookShare to Pinterest
Labels: Amjad Nasser, my own poems, Poetry Translation Centre, Quick Sip Reviews, Strange Horizons, translation
Newer Posts Older Posts Home
Subscribe to: Posts (Atom)
"The Stone and the Star simply IS poetry" (Anthony Wilson)
"The Stone and the Star constantly surprises with new discoveries and reminders of old favourites... Fast becoming a stalwart of the UK poetry blogging scene" (Matthew Stewart, Rogue Strands)
"Clarissa Aykroyd is doing an important thing: a poet writing about poetry, and with a spirit of awed enthusiasm" (Tim Buck, Spectral Lyre)
"Your life, with its immensity and fear,
...now bounded, now immeasurable,
it is alternately stone in you and star."
(from 'Evening', Rainer Maria Rilke,
translated by Stephen Mitchell)