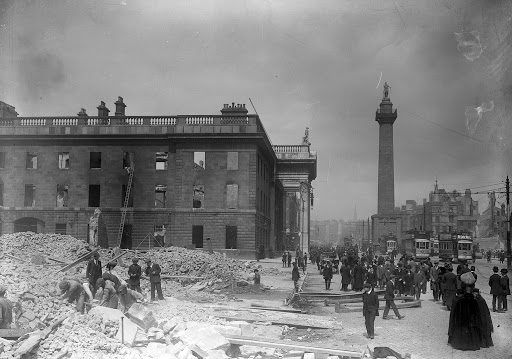 I recall first reading Victoria Kennefick's poem 'Cork Schoolgirl Considers the GPO, Dublin 2016' at least a couple of years ago. The poet is from County Cork, Ireland, and the poem was first published in Poetry Ireland Review in 2016, around the 100th anniversary of the Easter 1916 Rising. (The GPO, or General Post Office, is one of the most famous buildings not only in Dublin but in all of Ireland, because it was the headquarters of the Easter Rising.) Now, you can both read and listen to a reading of the poem here, on the iamb website: https://www.iambapoet.com/victoria-kennefick

This is absolutely one of my favourite poems of the past several years. In 20 lines, Kennefick captures humour, pathos, history, and the total insanity of being a teenager - the latter being possibly the most difficult accomplishment of all.

The poem pays tribute to "those boys in uniform" but it also captures the problematic ways in which our countries teach us history: "all the men of history sacrificing/themselves for Ireland, for me, these rebel Jesuses." This obviously isn't a particularly healthy perspective, but what brings me close to tears in these lines is also how true it is to how teenage girls think, or at least some teenage girls. Falling in love with dead heroes is just the kind of thing a lot of us did at 16. At the end of the poem, when the speaker says "I put my lips/to the pillar...I kiss all those boys goodbye", we understand that some day she'll look back at this as a crazy, sentimental, teenage moment. And yet, we also kiss those boys goodbye along with her and we feel the poet's empathy for those in history who were lost to war, and her equal empathy for the wild emotions of the teenage years.

Posted by Clarissa Aykroyd at 16:48 No comments:

New poems up on Anthropocene

Once again, distraction takes charge: I think I was pretty convinced that I had already written a blog post about the following.

I've had a couple of poems published on the Anthropocene website, another excellent online journal published by Charlie Baylis (who is also Chief Editorial Advisor with my publishers Broken Sleep Books. Yes, I love saying "my publishers".) You can read them here: https://www.anthropocenepoetry.org/post/2-poems-by-clarissa-aykroyd

Anthropocene is a very impressive journal which has also published the likes of Vahni Capildeo and Mark Waldron, among others. As for my poems 'Brush Pass, Royal Albert Hall' and 'Scarlet', it will come as a surprise to hardly anyone that the first one is inspired by spies and the second by Sherlock Holmes. Especially in the case of 'Scarlet', though, I think you could read them outside of those contexts and still find a way in.

Rereading 'Brush Pass, Royal Albert Hall', which I wrote a while ago, made me miss the Proms terribly in this pandemic year. In a "normal" year I always go at least a couple of times and usually feel as though I should have gone more. The Gallery, in particular, with people wandering up and down and behaving mildly oddly, is an excellent location for the discreet exchange of secrets.

Posted by Clarissa Aykroyd at 20:56 No comments:

Email ThisBlogThis!Share to TwitterShare to FacebookShare to Pinterest
Labels: Anthropocene, Broken Sleep Books, Charlie Baylis, my own poems, Sherlock Holmes
Newer Posts Older Posts Home
Subscribe to: Posts (Atom)
"The Stone and the Star simply IS poetry" (Anthony Wilson)
"The Stone and the Star constantly surprises with new discoveries and reminders of old favourites... Fast becoming a stalwart of the UK poetry blogging scene" (Matthew Stewart, Rogue Strands)
"Clarissa Aykroyd is doing an important thing: a poet writing about poetry, and with a spirit of awed enthusiasm" (Tim Buck, Spectral Lyre)
"Your life, with its immensity and fear,
...now bounded, now immeasurable,
it is alternately stone in you and star."
(from 'Evening', Rainer Maria Rilke,
translated by Stephen Mitchell)