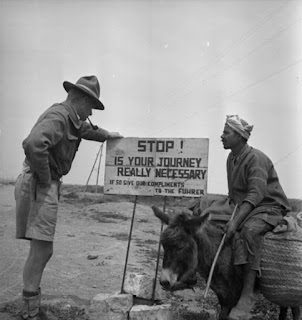 It has been a while since I've posted anything by Keith Douglas. Tonight I fell upon his poem 'Enfidaville', written in May 1943 - 75 years ago this month. It describes the aftermath of the Tunisian Campaign in the Second World War, in which Douglas took part.

Somewhat similar to his poem 'Mersa', 'Enfidaville' is, I think, less detached and more in-the-moment. Acknowledging "the pain this town holds", the speaker invests everything he sees with the aftermath of traumatic events: "the daylight coming in from the fields/like a labourer, tired and sad", "the ghosts tugging at doorhandles". When the speaker says of the town's cautiously returning inhabitants: "Who would not love them at this minute?", he seems to wryly acknowledge the uselessness of that question in the face of the destruction he has been part of. And he looks into "the blue eyes of the images in the church", perhaps sensing that they reproach him, or perhaps finding only emptiness and absence in those eyes.


In the church fallen like dancers
lie the Virgin and St Therèse
on little pillows of dust.
The detonations of the last few days
tore down the ornamental plasters
shivered the hands of Christ.

The men and women who moved like candles
in and out of the houses and the streets
are all gone. The white houses are bare
black cages. No one is left to greet
the ghosts tugging at doorhandles
opening doors that are not there.

Now the daylight coming in from the fields
like a labourer, tired and sad,
is peering about among the wreckage, goes
past some corners as though with averted head
not looking at the pain this town holds,
seeing no one move behind the windows.

But already they are coming back; to search
like ants, poking in the débris, finding in it
a bed or a piano and carrying it out.
Who would not love them at this minute?
I seem again to meet
the blue eyes of the images in the church.

Posted by Clarissa Aykroyd at 00:26 No comments: 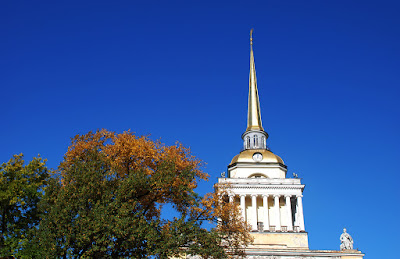 This poem, 'The Admiralty' by Osip Mandelstam, appeared a few years ago as a Guardian Poem of the Week in a translation by Yuri Drobyshev and Carol Rumens. It describes the Admiralty building in St Petersburg, Russia.

Carol Rumens' comments on her work with Yuri Drobyshev, and on the poem, are as always very much worth reading, particularly because Mandelstam is a complex poet who apparently is insanely hard to translate well (although a lot of people have tried - this always makes me, a non-Russian-speaker, a little nervous when I read his work in translation.)

What I've found in my somewhat intermittent reading of Mandelstam over the years is that his poems typically have an extremely concrete, physical focus (like a close-up, almost through a microscope) which then explodes into a constellation of observations (whether temporal or more philosophical). In this poem, Mandelstam cleverly gives the authority of a "demi-god" to human craftsmen, including the ability to transcend space and time.

I visited St Petersburg, then Leningrad, in 1985. It was summer, my family was on a side trip of a few days from Finland, and I would have been either almost six years old or just turned six. It's rather mysterious to me now to think that I visited Soviet Russia a few years before the end of the USSR (when I read the recent biography of John le Carré by Adam Sisman, I realised that I travelled there before le Carré ever did).

While I was a fairly well-informed kindergartner, I don't think I knew much about Russia or its history. It seems, though, that my parents had grasped the effect that travel can have on a growing mind. I didn't know that some day I would read Mandelstam, or that more than 30 years later I still wouldn't have returned to Russia. I don't remember if we saw the Admiralty building. What I remember are images from somewhere between dream and reality, which I have carried with me my whole life since: the customs officer at the Finland-Russia border, a young man probably no more than 20 years old, smiling down at me as my parents lifted me up; the Winter Palace, carved from an iceberg and stranded on the edge of a square the size of a planet; crowds on a street and a kvass machine; the cake-yellow Summer Palace and a trick fountain in the shape of a little dog; a white cat delicately carrying a fish along the street; an oppressive red velvet dining room at the Hotel Evropeiskaya (yes, we actually stayed there on a package tour); hockey-playing bears at the circus on ice; a city outside of darkness, sailing on the edge of a world vaster than anything I knew.

Email ThisBlogThis!Share to TwitterShare to FacebookShare to Pinterest
Labels: Carol Rumens, Finland, John Le Carré, Osip Mandelstam, Russia, translation, Yuri Drobyshev
Newer Posts Older Posts Home
Subscribe to: Posts (Atom)
"The Stone and the Star simply IS poetry" (Anthony Wilson)
"The Stone and the Star constantly surprises with new discoveries and reminders of old favourites... Fast becoming a stalwart of the UK poetry blogging scene" (Matthew Stewart, Rogue Strands)
"Clarissa Aykroyd is doing an important thing: a poet writing about poetry, and with a spirit of awed enthusiasm" (Tim Buck, Spectral Lyre)
"Your life, with its immensity and fear,
...now bounded, now immeasurable,
it is alternately stone in you and star."
(from 'Evening', Rainer Maria Rilke,
translated by Stephen Mitchell)