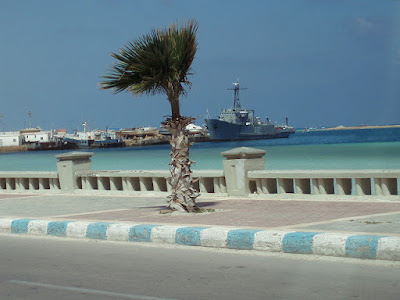 
This blue halfcircle of sea
moving transparently
on sand as pale as salt
was Cleopatra's hotel:

here is a guesthouse built
and broken utterly, since.
An amorous modern prince
lived in this scoured shell.

Now from the skeletal town
the cherry skinned soldiers stroll down
to undress to idle on the white beach.
Up there, the immensely long road goes by

to Tripoli: the wind and dust reach
the secrets of the whole
poor town whose masks would still
deceive a passer-by;

faces with sightless doors
for eyes, with cracks like tears
oozing at corners. A dead tank alone
leans where the gossips stood.

I see my feet like stones
underwater. The logical little fish
converge and nip the flesh
imagining I am one of the dead.


Apparently it was on this day (26 March) in 1944 that Keith Douglas sent 'Mersa' to Betty Jesse, who was the assistant of Tambimuttu, editor of Poetry (London). Betty Jesse was also one of Douglas's girlfriends, which comes as no surprise to anyone who has read about his complicated love life.

Mersa is Mersa Matruh in Egypt, not far from El Alamein and another key location in the Western Desert Campaign of World War II. It has also been a popular beach resort for a long time. This concise poem seems to describe an out-of-season resort, but details emerge gradually to show that the war has ravaged this town: it is 'skeletal' and 'A dead tank alone/leans where the gossips stood'.

As is sadly so often the case in Douglas's poems, 'Mersa' ends with a portrait of the artist as a dead man. The brilliance of the final stanza is in how much it says with so few words. Douglas sees his feet like 'stones underwater': he is like an ancient statue lost in a Mediterranean harbour, already becoming part of history. The 'logical' fish see him as edible, 'one of the dead'. Douglas is logical, too, but as with the clear water of the port, there is always more beneath the surface. 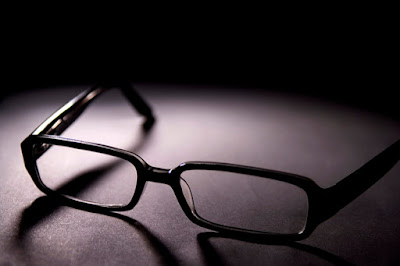 I'm very pleased to say that one of my poems was chosen to appear in Eyewear Publishing's Best New British and Irish Poets 2016 anthology. You can order the anthology here and read some more details about how it came about: http://store.eyewearpublishing.com/products/the-best-new-british-and-irish-poets-2016

There will be a launch and reading for the anthology on Sunday, 20 March at 3 PM in London, at the Camden Eye pub (2 Kentish Town Road, NW1 9NX) and everyone who would like to come is invited. You can find the relevant Facebook event here: https://www.facebook.com/events/1205486292813778/

or find information on the Eyewear website here: http://store.eyewearpublishing.com/blogs/news/88879108-join-eyewear-for-the-launch-of-the-best-new-british-and-irish-poets


Posted by Clarissa Aykroyd at 20:37 No comments:

Email ThisBlogThis!Share to TwitterShare to FacebookShare to Pinterest
Labels: Best New British and Irish Poets, Eyewear Publishing, my own poems 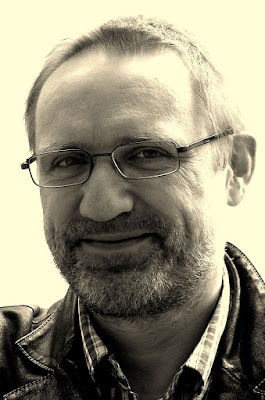 
A little while ago I came across sixteen extraordinary short poems by the Polish poet Wojciech Bonowicz, on the Jacket2 website. You can read them here: https://jacket2.org/poems/sixteen-poems-wojciech-bonowicz-b-1967

I met Wojciech Bonowicz a few years ago at a launch event for a new issue of Modern Poetry In Translation which had a focus on Polish poetry. After the event I was talking to Sasha Dugdale (MPT's editor), Elżbieta Wójcik-Leese (translator of contemporary Polish poetry) and Bonowicz. I was having a slightly embarrassing self-disclosure moment and decided to share my personal difficulty with Central and Eastern European poetry. The conversation went something like this:

Me: I love Polish poetry, I really love it, and poetry from other parts of Central and Eastern Europe too. But sometimes I feel like I can never truly understand it, you know? Even as compared to poetry from other parts of the world, Polish poetry seems particularly "coded" to me and it almost seems as though because I'm not from that background, I didn't grow up with those particular references and that historical frame of reference, it's just not possible to understand that code, besides the extra layer of difficulties imposed by not speaking the language and therefore only being able to access it in translation. Can I ever really understand it???

Poets and translators: (looking faintly amused) Oh, well, you know, you're here, and you appreciate the poetry. So basically, you're doing fine.

When I told this story to some friends later, rather as a bit of a laugh against myself, one of them suggested that this was a slightly evasive answer. It might have been, but I think it's more likely that they didn't want to discourage me. When a new face shows up bright-eyed and bushy-tailed at a poetry-in-translation event and confesses that poetry from a certain part of the world poses a particular challenge for her, you probably don't want to say "yes, you're right - you are never going to understand poetry from this cultural milieu." I have actually found that the organisations, journals and individuals who work with poetry translation are a particularly welcoming bunch. Poetry is already a niche area in the English-speaking world, and translated poetry is a niche within a niche. If you just show up and act polite and interested, they will embrace you.

What is interesting, though, is that late last year I read this post on the blog of Hungarian-British poet George Szirtes, on the poetry of Eastern Europe: http://georgeszirtes.blogspot.co.uk/2015/12/the-poetry-of-eastern-europe-talk-at.html

It was based on a lecture he had given on Eastern European poetry, rather more on great figures of the 20th century such as Zbigniew Herbert, Vasko Popa and Miroslav Holub than on contemporary poets. The poets and poems mentioned are obviously very much worth checking out, but there are also some really interesting comments, especially in light of my own conclusions about poetry from this part of the world. I found this particularly interesting:

'As to differences, the nations of Eastern Europe did not suffer from post-colonial guilt though they had (and have) yet to deal with war guilt. The first years after the war the pressure of officially approved socialist realism - often traditional in form - meant that 'unofficial' art and poetry was best expressed through modernism: no formal prosody, no rhyme, disposable punctuation or capitalism, no ornate metaphors, no declamatory first-person singular. The freedoms offered by surrealism also offered complex ways of addressing politics. This encouraged a belief in codes, in secret complicities, in a common energy.' (George Szirtes)

I should mention at this point that as far as I can tell - and not surprisingly - contemporary Polish poets are generally quite careful to point out that as great as these figures are, poetry has moved on from Czeslaw Milosz, Zbigniew Herbert, Wisława Szymborska, Adam Zagajewski and the other poets who usually come to mind when Polish poetry is mentioned. As far as I can tell, reading only in translation, there is also an astonishing variety of poetic voices from Poland. It's a little too easy even for those with a keen interest in international poetry to make sweeping statements about 'Polish poetry' or 'Arabic poetry' or whatever it might be.

The sixteen poems which I linked to by Wojciech Bonowicz, above, were actually published as part of a feature on the poet Tadeusz Różewicz and his legacy. They are small, intimate poems without pretentiousness, with a keen awareness of life's spiritual dimension, and with a sense of universality rather than the often limited perspective of the English lyric poem's 'I'. I hope that description isn't too facile, because it has something to do with why my brain lights up so much when I read much international poetry in translation. I can feel it happening. It seems somehow to encompass more than what I so often find in English-language poetry - and that's even with the codes and the surrealism. In an editorial for that issue of MPT, Wojciech Bonowicz wrote the following, which I love:

'The presented four poets have one more feature in common: they favour conciseness, the construction of elliptical poems similar to maths equations with multiple unknown quantities. In recent Polish poetry being elliptical means being credible. Being elliptical counteracts the dominant culture of the obvious; it subverts well-rounded sentences falsifying reality by alleviating its conflicts and pushing beyond its circumference that which is dark and mysterious. The poet - from this vantage point - is one who opposes the fossilization of language, one who attends to its fissures. In this way the poet remains a secret agent of elusive sense.' (Wojciech Bonowicz)

Posted by Clarissa Aykroyd at 21:00 6 comments:

Joy Harjo: 'She Had Some Horses' 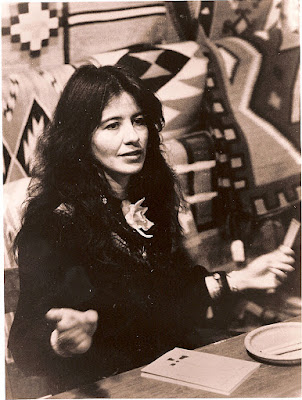 
Mvskoke (Creek) Nation poet Joy Harjo recently won the Wallace Stevens Award, which is awarded by the Academy of American Poets Board of Chancellors for 'outstanding and proven mastery in the art of poetry'. I was pleased when I saw this news, because the famous poem 'She Had Some Horses' had made a great impression on me from the moment I read it.

I recommend the Poetry Foundation article on Joy Harjo, and the other fine poems by her that can be found there. Harjo writes out of a deep source of Native American identity, but 'She Had Some Horses' is also about female identity and it may have come to mind this week because of International Women's Day.

I am painfully aware that (as a woman and a writer) I read and write about a lot more male poets than female poets, and I would quite like to remedy that (although at the same time, I don't feel apologetic about who I do or don't read...) The fact that I'm aware of it indicates that I know there is a lack there. And 'She Had Some Horses' reminds me beautifully and painfully how disparate, but formative and profound, all the experiences and relationships are that are part of being a woman. It is one of those poems for which I would like to thank the poet.

Posted by Clarissa Aykroyd at 23:21 2 comments:

Email ThisBlogThis!Share to TwitterShare to FacebookShare to Pinterest
Labels: Joy Harjo
Newer Posts Older Posts Home
Subscribe to: Posts (Atom)
"The Stone and the Star simply IS poetry" (Anthony Wilson)
"The Stone and the Star constantly surprises with new discoveries and reminders of old favourites... Fast becoming a stalwart of the UK poetry blogging scene" (Matthew Stewart, Rogue Strands)
"Clarissa Aykroyd is doing an important thing: a poet writing about poetry, and with a spirit of awed enthusiasm" (Tim Buck, Spectral Lyre)
"Your life, with its immensity and fear,
...now bounded, now immeasurable,
it is alternately stone in you and star."
(from 'Evening', Rainer Maria Rilke,
translated by Stephen Mitchell)