Sea Reconnection, featuring my poetry and the art of Miles Taverner and Darren Hewitt, is now drawing to a close and this is its final weekend. I wanted to share a few photos of the exhibition and to thank everyone who came, and particularly to thank Paula Taverner and Kathy Brown, who did so much work behind the scenes. (There are others: we love you all!) The exhibition has been part of the wonderful Totally Thames Festival 2021.
The exhibition is still open this Saturday and Sunday (25 and 26 September): 11-5 on Saturday, and 11-3 on Sunday.
Le Sorelle, 1 Thames Quay, Canary Wharf, London E14 9SG
(across from South Quay DLR Station 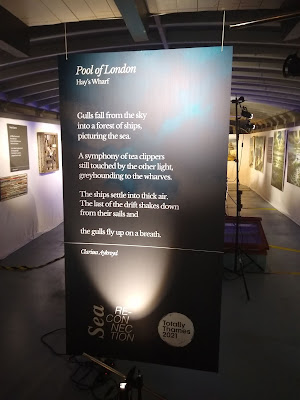 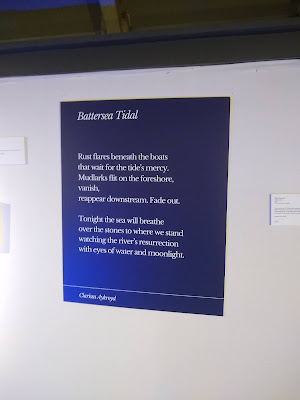 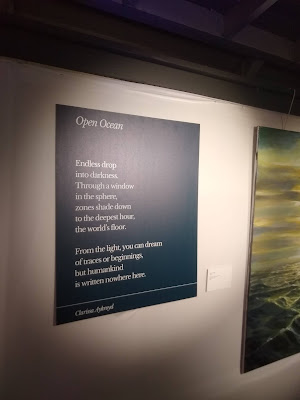 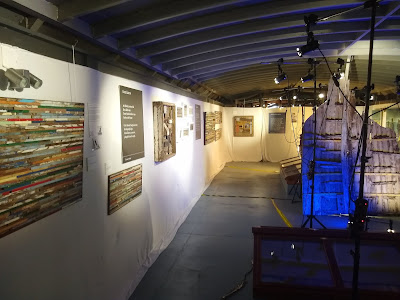 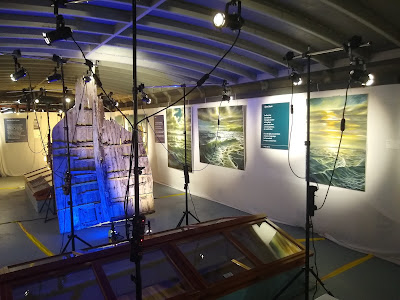 Posted by Clarissa Aykroyd at 19:48 No comments:

Sea Reconnection: an art and poetry exhibition in London, September 2021

This month at Canary Wharf in London, the Le Sorelle river barge will host the Sea Reconnection exhibition (part of the Totally Thames Festival 2021), featuring my poetry and work by the visual artists Darren Hewitt and Miles Taverner.
The exhibition has been in the works for a long time - since 2019, in fact, although I joined the project at a slightly later stage in early 2020. Originally it was planned for spring 2020, but sadly due to COVID, all plans were off. We are delighted that it is finally happening and particularly that we have been able to join the Thames Festival. 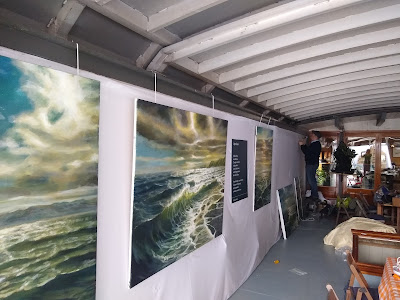 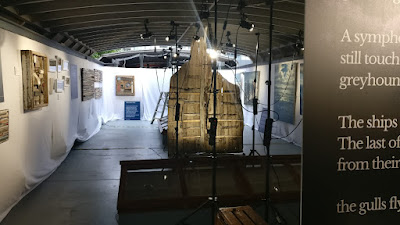 Darren Hewitt's paintings are focused on expansive, light-filled seascapes and human interactions with these perspectives, while Miles Taverner uses materials recovered and recycled from the sea to create tactile, colourful, often large-scale pieces.
Several of my poems appear alongside these artworks and bring together the themes of the sea and the Thames. In new works such as 'Great Eastern' and 'Pool of London', I have written about historic connections between London's river and the ocean. 'Great Eastern', below, was inspired by the ship of the same name, designed by Isambard Kingdom Brunel, built at Millwall and eventually destined to lay the first lasting transatlantic telegraph cable in 1866.
GREAT EASTERN
At Millwall, an iron hull
like a fallen star.
Brunel with his fierce eyes
fixed on the future.
Grey Atlantic fought and held
the telegraph light.
Great Eastern, a meteor,
ploughed into the night.
The exhibition is free to all and is open every weekend from Friday to Sunday in September - details below. Please come if you can.
Sea Reconnection
Le Sorelle, 1 Thames Quay, Canary Wharf, London E14 9SG
(across from South Quay DLR station)
September 2021
Fridays and Saturdays 11am to 5pm
Sundays 11am to 3pm

Posted by Clarissa Aykroyd at 21:17 No comments:

Email ThisBlogThis!Share to TwitterShare to FacebookShare to Pinterest
Labels: Darren Hewitt, Le Sorelle, London, Miles Taverner, my own poems, Sea Reconnection, Totally Thames Festival
Newer Posts Older Posts Home
Subscribe to: Posts (Atom)
"The Stone and the Star simply IS poetry" (Anthony Wilson)
"The Stone and the Star constantly surprises with new discoveries and reminders of old favourites... Fast becoming a stalwart of the UK poetry blogging scene" (Matthew Stewart, Rogue Strands)
"Clarissa Aykroyd is doing an important thing: a poet writing about poetry, and with a spirit of awed enthusiasm" (Tim Buck, Spectral Lyre)
"Your life, with its immensity and fear,
...now bounded, now immeasurable,
it is alternately stone in you and star."
(from 'Evening', Rainer Maria Rilke,
translated by Stephen Mitchell)