Review: David Howard - The Ones Who Keep Quiet 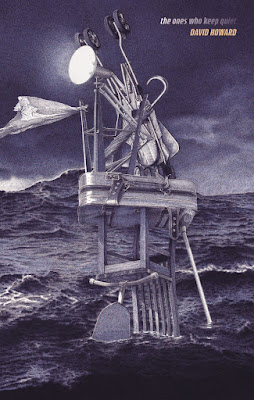 New Zealand poet David Howard, who lives in the South Island city of Dunedin, has held residencies as close to home as the University of Otago and as far away as Prague; his next residency will be in Ulyanovsk, Russia. His most recent collection, The Ones Who Keep Quiet (2017, Otago University Press), is equally connected to New Zealand, the South Pacific and cities of the Northern Hemisphere, through the shifting figures of Auckland businessmen, alleged spies, and others.

It's an ambitious comparison, but The Ones Who Keep Quiet has something in common with TS Eliot's Four Quartets in that its poems are typically grounded in real-world places, with an almost overwhelming level of historical detail (a couple of the poems have end notes to rival Eliot's The Waste Land), but they feel internal, intellectual, mystical. If anything, they seem to depict the movement of the human mind, with its blend of the abstract and the concrete, and often under great pressure. In some cases, the pressure takes the most final form, death.

The first piece in the book is a long poem written in sestains. 'The Ghost of James Williamson 1814-2014' is about the Belfast businessman's youth on his father's ships and his eventual existence in New Zealand - both before and after his death on 22 March 1888. Appropriately, the sestains flow down the page in shapes suggesting waves, or brainwaves. There are also the tides of belief, their ebb and flow:

...Our fall into Paradise shows
God is an ironist
who gives the knife another twist -
pointed refusal to disclose
proof He's the first cause.

There is, perhaps, also an echo of the famous ship appearing at Clonmacnoise in Seamus Heaney's 'Lightenings' (viii), when "stunned under the Gothic/arch of a monstrous swell", James Williamson declares: "the unreal becomes our last port of call". As with most poems in The Ones Who Keep Quiet, the writing is very dense and allusive, with occasional leaps which seem almost random but are carefully calculated. This poem concludes on a very odd and ironic note of "sex, drugs and rock'n'roll", which at first seemed entirely incongruous to me based on its protagonist's life in the 19th century: however, it succeeds in giving the impression that the ghost is floating freely in time, but also trapped.

Throughout, and with rare exceptions, I was more enthralled by the collection's long poems than by the shorter lyrics, as Howard's work seems to excel when it has more leisure to establish a voice and to sink into a story or a train of thought. 'The Speak House' is another centrepiece of the book, a dive into the mind of Robert Louis Stevenson in the last few hours of his life. The poem is full of very specific references to Stevenson's life and work and had a slightly overwhelming level of end notes, but the most rewarding moments are often those of sudden clarity: "Starlight strikes the dead and the living/with equal intensity, flesh being what it always was" and "breathless/running after my shadow: that is what writing is." After the demands of 'The Speak House' I turned with some relief to one of the best shorter poems (well, two pages), 'The Vanishing Line', a self-scrutinizing poem with an unfolding/enfolding structure and echoes of Paul Celan: "Between, that is where the poem grows/between the visible, the invisible."

Howard touches on family history, on love, and dedicates a beautiful poem ('L'Histoire du Soldat') to Russian poet Tatiana Shcherbina. Particularly intriguing, though, is the long poem 'Prague Casebook' which, as Howard says in the end notes, "circles the character of the New Zealander and alleged spy Ian Milner (1911-1991)". A Rhodes scholar and friend of Miroslav Holub, Milner was eventually identified as a spy who passed information to the Soviets while working for the Australian Department of External Affairs in the Post-Hostilities Division during the 1940s. He defected to Czechoslovakia, but denied having been a spy. Milner's case is still controversial. His voice in 'Prague Casebook' is ironic and elusive, sliding away, providing excuses or perhaps simple facts: "Poetry's half a meal. Don't go hungry." Milner seeks kinship with Russian poets Mayakovsky and Mandelstam - "Sing/Vladimir, sing Osip, to show we are still men among men", but no doubt also recalls their troubled or fatal relationships with the Soviet authorities. Addressing God in the closing lines of the poem, Milner could be admitting to guilt, or defining himself as a victim, or both: "Your paradise was a short ride in a fast car, I got out/on the wrong side, that's clear as ice on the highway at first light."

The Ones Who Keep Quiet isn't a perfect collection: I found that its self-consciousness could occasionally be stifling, and Howard succeeds noticeably better with male voices and characters than with female perspectives. However, it is an exceptionally skilled and ambitious work which will reward rereading, as it offers so many layers to explore. Readers who appreciate psychology, flair and challenge in their poetry will enjoy The Ones Who Keep Quiet.

Posted by Clarissa Aykroyd at 23:47 2 comments: