Dylan Thomas: 'A Refusal to Mourn the Death, by Fire, of a Child in London' 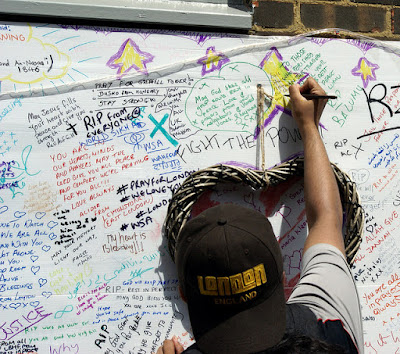 
The overwhelming tragedy of the Grenfell Tower disaster in west London on 14 June has made me think of Dylan Thomas's famous poem of the Blitz, 'A Refusal to Mourn the Death, by Fire, of a Child in London'.

I hesitated a lot before posting this. Grenfell Tower is a massive human tragedy, where at least some of those who lost their lives were children. It is not like one of my more usual "something made me think of this poem" situations. I also hesitated because 'A Refusal to Mourn...' has always unsettled me. It's in the title, and certain lines. Thomas is plainly mourning, in his own way, and the title is paradoxical, but it unsettles. When I thought about it, though, I realised that this disturbed feeling was probably conjured deliberately by the writer and that in some ways it is the only normal reaction. After all, the violent death of a child (in particular) should be disorienting, disturbing and unsettling.

I have read various analyses of this poem over the years, and there is no consensus. 'A Refusal to Mourn...' is oblique, open to interpretation and mysterious. In the wake of the Grenfell Tower fire, many of my thoughts about it come from this moment and this shocking event. But a great poem can do this. So here are a few thoughts:

The poem's structure reflects the confusion of grief. The first two stanzas, in particular, contain beautiful phrases, but they tumble over each other at a velocity suggesting desperation. There is something here, of the flurry of thoughts and the attempt to draw them into a clearer picture, which is reflective of shock. In the final two stanzas the speaker seems to try to gather his ideas into a slightly more straightfoward, elegiac conclusion.

The speaker's thoughts are of both life and death. "Fathering", "the last light breaking", "the round/Zion of the water bead" (this sounds like an image of the womb), "sow my salt seed/In the least valley of sackcloth to mourn"... Some of these images could be of life and death at the same time.

The speaker is commenting on the equality of all human beings. There can be no doubt that Grenfell, a disaster which occurred in a poor subsection of one of the richest areas in the country, was a tragedy arising at least in part out of inequality and its terrible effects. During the Blitz in World War II, which this poem remembers, many if not most of the children who died were from poor families, as they had fewer options in terms of evacuating to safer areas.

My interpretation might therefore be very much of this moment in time, but it seems to me that by keeping the child's identity indefinite, the interpretation is open for her to represent all human beings from all backgrounds, or at least all children who die violently. There are references to a variety of religious traditions (Judaism with "Zion" and "synagogue", "the stations of the breath" as a variation on the Catholic Stations of the Cross, "London's daughter...the dark veins of her mother" perhaps a reference to some pagan tradition.) "The mankind of her going" also opens this elegy up beyond a single human being.

The final line "After the first death, there is no other" has also inspired much analysis. Some think it's a reference to the resurrection, while others think it denies this possibility. I have always (even before recent events) had a sense that the child's death is meant to represent all deaths, and thus it is "the first death". I was reminded of the famous John Donne quotation from Meditation 17: "Any man's death diminishes me, because I am involved in mankind; and therefore never send to know for whom the bell tolls; it tolls for thee." When the equal importance of all human lives is forgotten, as it so often is, the conditions for various kinds of horror and disaster are far more likely to arise.

Here are a few of the reputable funds to which you could donate if you want to assist victims of the Grenfell disaster:

Posted by Clarissa Aykroyd at 00:34 No comments: 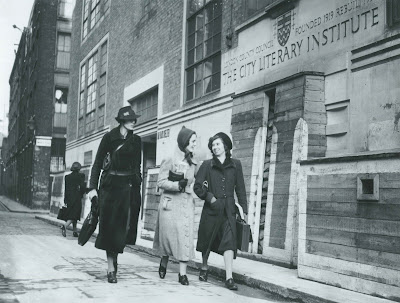 
Earlier this year, I took an InDesign course for my work. It was at City Lit college in central London, near Holborn station. I hadn't thought much about the type of institution where I'd be brushing up my InDesign skills for a few weeks - but when I arrived for my first class, I was impressed at the range of classes taking place at the same time as mine, and also a little jealous of the people who were taking Basic Danish or Biblical Hebrew. The floor where my classroom was located seemed to have a good deal of painting and sculpture going on.

When I looked up further details about City Lit (mainly in the history section of their website) I discovered that they had originally been established in 1919 by the London County Council as a "literary institute", along with several others around the city. Essentially, these were non-vocational colleges (but not universities) where students could take humanities courses and the like, without committing to something like a degree program.

The website provides more details about the fascinating history of this institution, but I was very taken with the fact that their teachers and lecturers included the likes of Edith Sitwell, TS Eliot, Cecil Day-Lewis and Dylan Thomas, among others. When their new building opened in 1939, John Masefield (then Poet Laureate) did the honours.

The moral of the story is that in London, if you scratch just the tiniest bit beneath the surface, you'll probably receive disproportionate rewards, and they might include poetry. I also ran into a bit of synchronicity at this point. Around when I was taking the InDesign course, I was reading A Colder War, the second volume of a trilogy by spy novelist Charles Cumming. The trilogy features disgraced spy Thomas Kell, who desperately wants to "get back in the game" but has found himself with some time to kill. At one point, he thinks "of the long afternoons he had spent brushing up his Arabic at SOAS, the solo holidays in Lisbon and Beirut, the course he had taken at City Lit in twentieth-century Irish poetry." In other words, when all you think you're doing is taking a desktop publishing course, there are probably some bored spies just around the corner in the same building who hope that poetry might help to fill the slow hours. It also turns out that Thomas Kell enjoys reading Seamus Heaney's The Spirit Level and that he especially likes the poem 'Postscript' (so do I).

Posted by Clarissa Aykroyd at 21:53 No comments: