Nikola Madzirov: 'The One Who Writes' 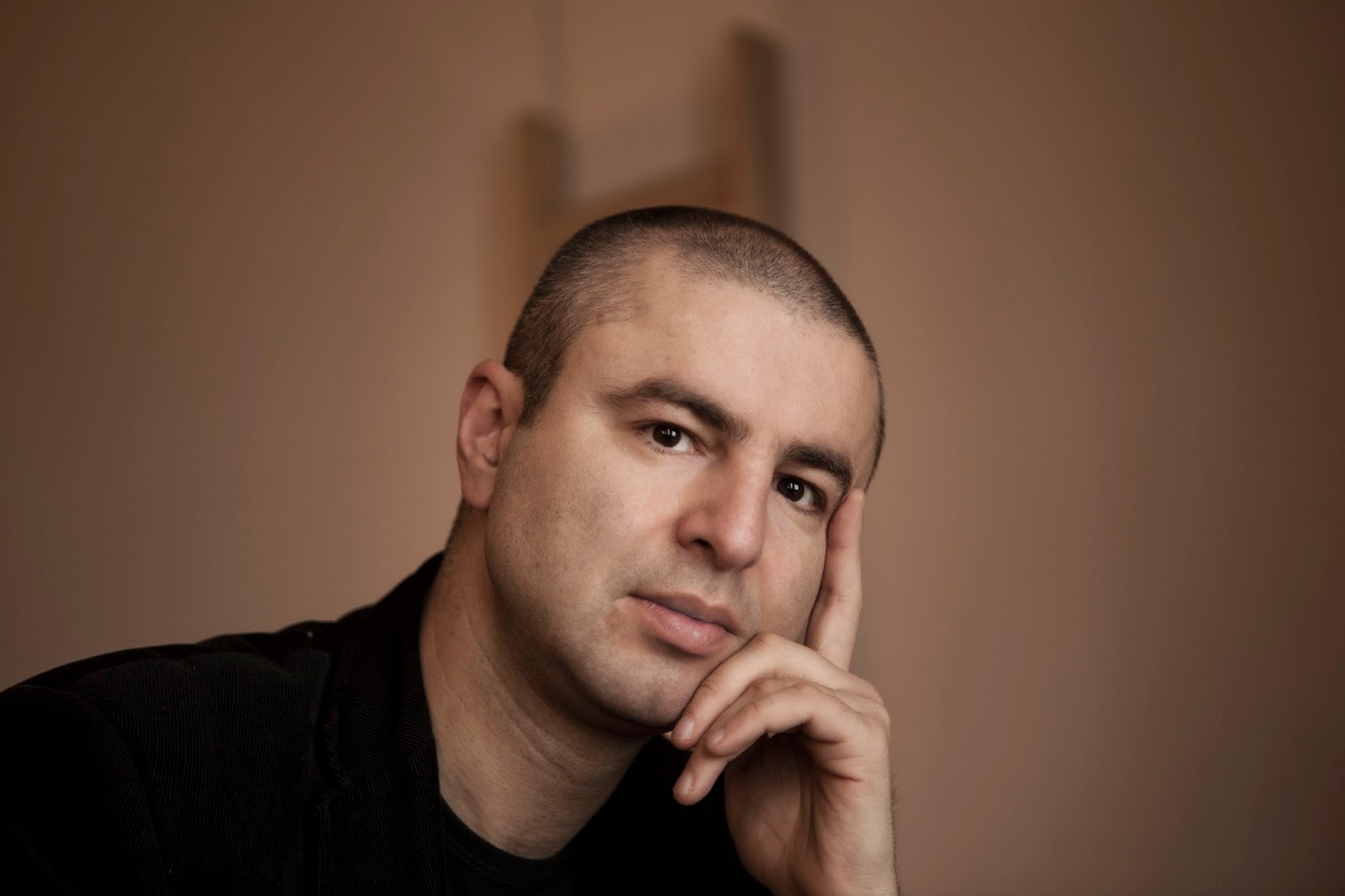 
I met the Macedonian poet Nikola Madzirov at Poetry International, on London's Southbank, last July. He was reading a few times during the festival and I saw him alongside other incredible poets such as Carolyn Forché, Anne Michaels and Robert Hass. We also spoke a few times - I had briefly been in touch with him on social media before, although some time previously, and he still remembered me, which was great but not that surprising. He seems to have a widespread reputation as not only one of the best poets out there, but one of the nicest.

In the course of one of these conversations I asked him if I could reproduce one of his poems (or one of the translations, anyway) in my blog, and he said yes, of course. This blog post is therefore something like nine months late, which I can only put down to procrastination, not being sure which poem to choose, and feeling slightly daunted.

Madzirov seems to be one of the hardest-working poets out there - every time I've googled him or looked him up on Twitter, he seems to be appearing at yet another poetry festival on yet another continent. His poems, on the other hand - which have appeared in English translation in Remnants of Another Age (Bloodaxe Books, 2013 in the UK; BOA Editions, 2011 in the US; translations by Peggy Reid, Graham Reid, Magdalena Horvat and Adam Reed) - are hard-working pieces which feel effortless. They seem like spiritual-secular prayers spoken inside the head, like the mind whispering of the most personal, trivial and essential things and weaving all the connections into a haunting whole.

These poems are very often about doubt, inbetween states, statelessness, travel, and a sort of forwards-and-backwards nostalgia. Madzirov was a descendant of refugees and he was coming of age around when the Balkans descended into war - unsurprisingly, the images of body and identity in these poems are often fragmented, beautiful but also broken. They are poems which, lightly but sometimes painfully, seem to be constantly moving, sometimes groping toward something, somewhere or someone.


We'll meet one day,
like a paper boat and
a watermelon that's been cooling in the river.
The anxiety of the world will
be with us. Our palms
will eclipse the sun and we'll
approach each other holding lanterns.

(from 'Shadows Pass Us By')


I had a hard time choosing a poem for this post, but decided my choice was 'The One Who Writes'. When Madzirov read this at Southbank, he said "People ask me if I am a poet. I say, 'I am the one who writes.'"


THE ONE WHO WRITES (Nikola Madzirov - trans. P Reid, G Reid, M Horvat and A Reed)


You write. About the things that already exist.
And they say you fantasize.

You keep quiet. Like the sunken nets
of poachers. Like an angel
who knows what the night may bring.

And you travel. You forget,
so that you can come back.

You write and you don't want to remember
the stone, the sea, the believers
sleeping with their hands apart.


I liked this poem partly because of a certain familiarity to the opening lines. Madzirov's poems, even when dark, usually have a considerable gentleness, but there is a kind of snap to "And they say you fantasize" which as a writer I recognised.

The final lines are both frightening and peaceful - to me, it seems an image of death, possibly violent death, and possibly with implications of trauma. If the one who writes can't forget, he might not be able to come back. 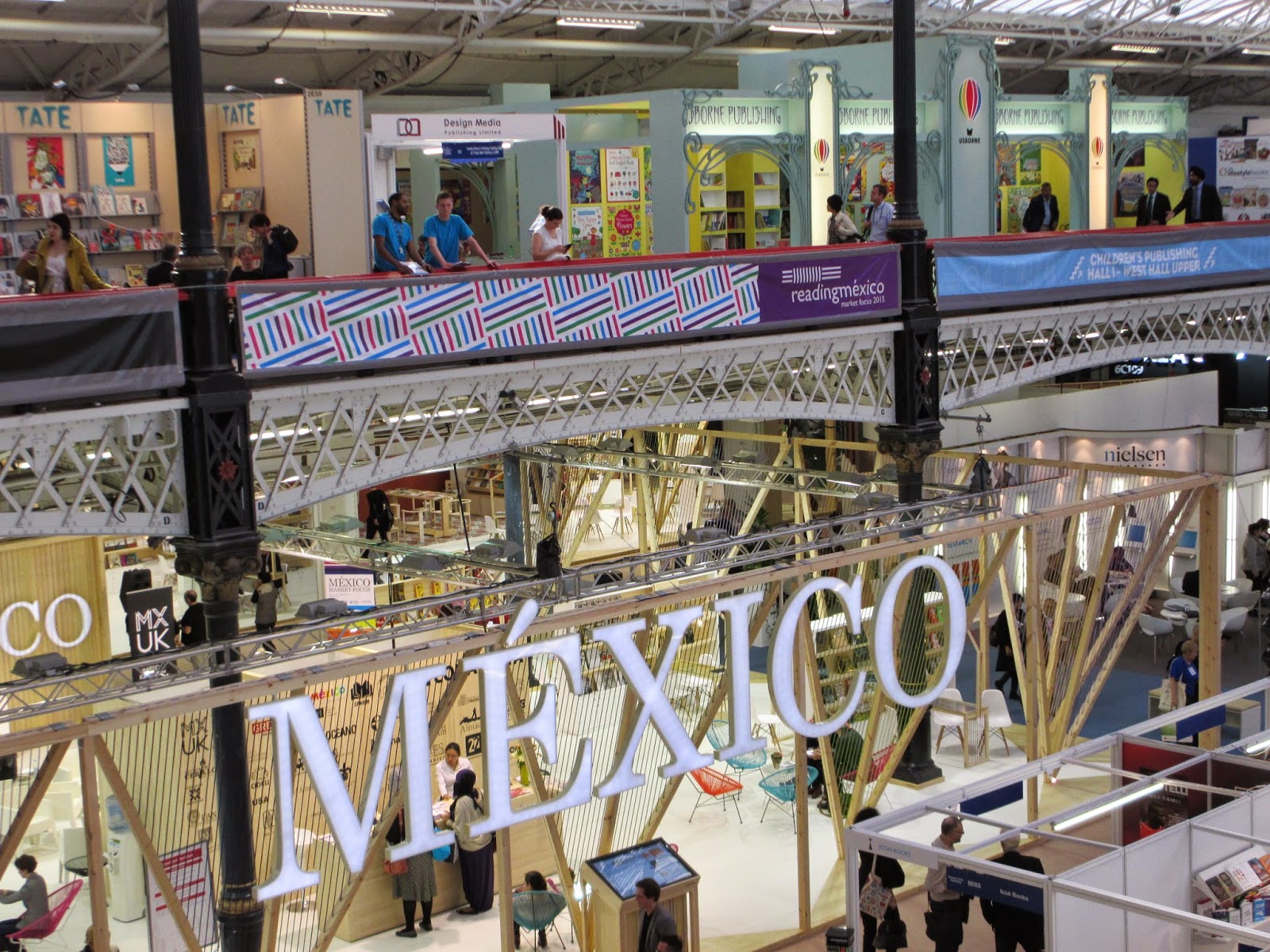 The Mexico pavilion at the London Book Fair, Olympia, April 2015.

After several years of working in and around publishing in London, I finally made it to the 2015 London Book Fair (now at Olympia) last week. I spent a full day there on Tuesday and also returned near the end of the day on Wednesday. I was there for work purposes, but given that my publishing work involves a bit of everything from editing to sales to permissions to literacy issues, I had a pretty open remit, which obviously suited me quite nicely. In practice it meant that I traipsed happily around the entire LBF at least two or three times, went to several fascinating and relevant seminars and meetings, and also had some time for poetry matters.

I caught up briefly with George Szirtes, who was part of a very interesting panel on 'What We Talk About When We Talk About Writing and Reading in the Digital Age', along with Julio Trujillo, James Knight and Mauricio Montiel Figuieras - these writers are known for their Twitter-based literary explorations. Later on, I finally met Jo Bell, who I knew from online mainly through her inspiring 52 project and who was releasing her new collection, Kith. She talked about her Canal Poet Laureateship and her reading from Kith was bold and bright, which was much needed because we were in a very loud environment with no amplification... (perhaps something for LBF to think about if they do another Poetry Pavilion again?)

The country focus for LBF this year was Mexico, which was of particular interest to me as I have a growing interest in Latin America and have been working on my Spanish in the last couple of years - and I have also been to Mexico, although it was a long time ago and very much as a tourist. The country focus meant that many publishers from Mexico exhibited and I browsed through many interesting poetry collections and other books.

On my full day I also went to 'An Insight into Contemporary Mexican Poetry', which featured the poets Pedro Serrano and Tedi López Mills, reading their work and in discussion with poet and novelist Adam Foulds. Pedro Serrano read poems such as 'Serpiente' (Serpent) and 'Regents Canal', while Tedi López Mills read from her novel in poem form, Death on Rua Augusta. López Mills called poetry "a very significant way of being insignificant", while Serrano spoke of how there are "different ways of touching poetry, but at the same time with connections". In terms of influence, López Mills mentioned that Mexican poetry is very influenced by the French poetic tradition. Serrano pointed out that in Latin American terms, Colombia is generally more artistically conservative and Argentina is more adventurous, while Mexico finds itself somewhere in the middle. It was a very illuminating discussion and the poetry was great.

On Wednesday, when I returned late in the day, I went to the launch party for Carcanet's re-release of the Collected Poems of Octavio Paz. I have been reading and admiring Paz increasingly in recent months, and there was also tequila and good conversation (one no doubt assisted by another). Also, I discovered that if the tequila has been flowing, publishers will probably start to just give you books. 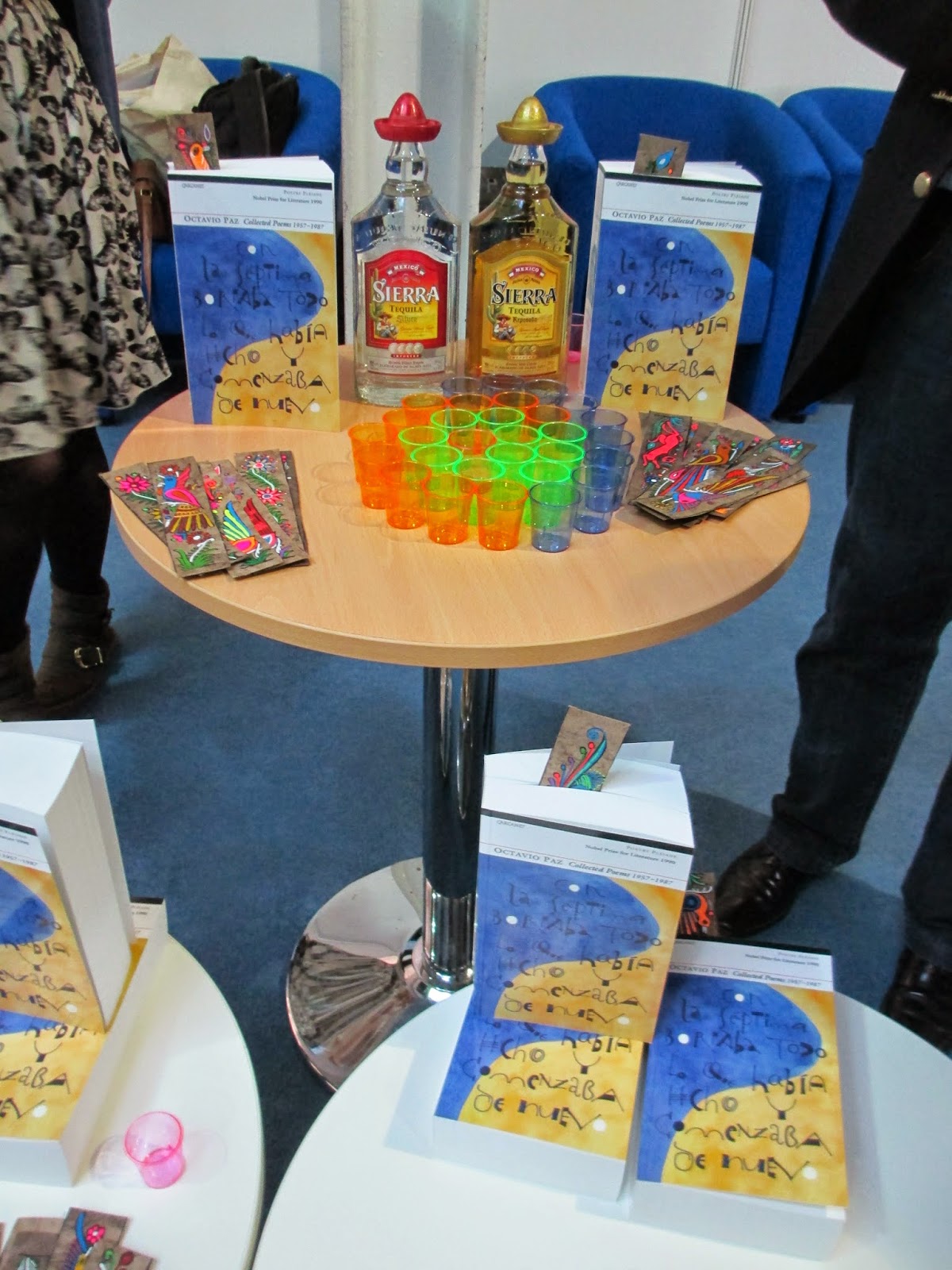 
My final LBF event was on the Thursday at the Saison Poetry Library, where I attended another reading by Tedi López Mills organised by Modern Poetry in Translation and the British Council. López Mills gave some more insights into the incredibly intriguing Death on Rua Augusta, which I just had to buy. It is not just poetry but a perspective-shifting film noir-type narrative, set in Fullerton, California - according to López Mills, "a place where no one would pay to go." "Poetry is always on the defensive, always encased in barbed wire, afraid of getting hurt," she commented. Whatever the case may be, this poetry is taking a bold stance, and I can't wait to read more of it. 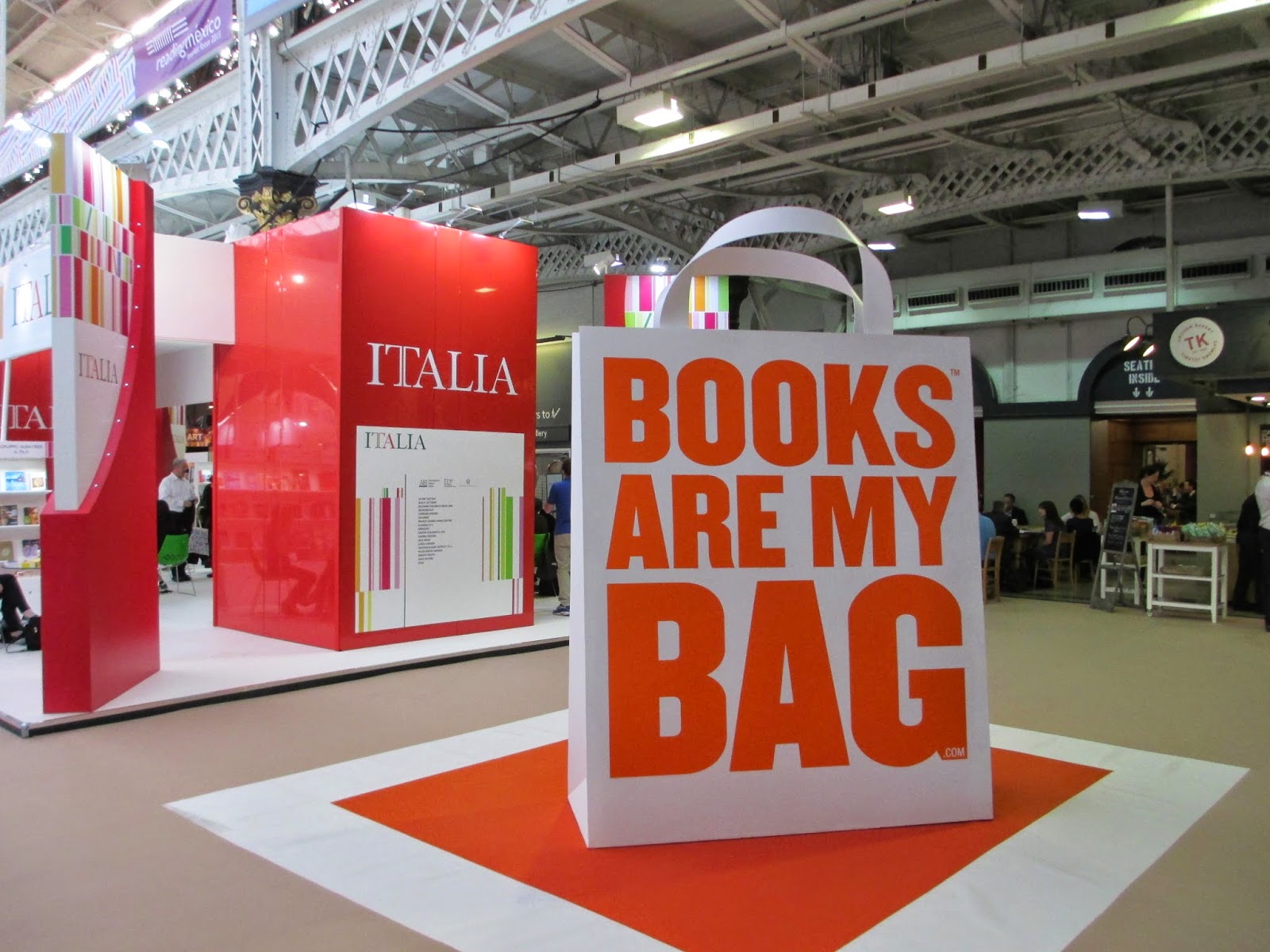 
In a rather tired state, but still wanting to post something tonight, I thought I would share this poem written by Keith Douglas at the age of fifteen. It made an impression on me surpassed only by his much later work.

'Caravan' reminds me of the following: the song 'Secret Journey' by The Police, the poem 'The Disappearing Island' by Seamus Heaney, and some of the more allegorical work of Ursula Le Guin.


Going beyond the gate they found these men
Sitting in the last light and regarding the great sun
With understanding. And one spoke to them presently,
Saying he had discovered the soul of music
At one time. And another said, that when
The birds flow southwards, heading across the continent,

Then the wild sea, under the always rhythmic
Shutter of wingtips, only suggests to spent
Eyes slanting, the slope of green and mountainous moving
Country; familiar, only no priests in the cities
Handling the cold bronze, counting. The stones in panic
Chilled, the bright dust reflecting the heavens' faces.

Thus he revealed the perfect sources, the lost
Wisdom, seeing only the loved existent;
The clouds flying, Earth stretching in silence
Chameleon, the colours limited, dyes all lost.
All this he told them, speaking the tongue of the swallows.

But they not knowing the words, nor in his hands
Seeing the meaning, went thence over the sands.

Posted by Clarissa Aykroyd at 23:22 2 comments:

Email ThisBlogThis!Share to TwitterShare to FacebookShare to Pinterest
Labels: Keith Douglas, Seamus Heaney, The Police, Ursula Le Guin
Newer Posts Older Posts Home
Subscribe to: Posts (Atom)
"The Stone and the Star simply IS poetry" (Anthony Wilson)
"The Stone and the Star constantly surprises with new discoveries and reminders of old favourites... Fast becoming a stalwart of the UK poetry blogging scene" (Matthew Stewart, Rogue Strands)
"Clarissa Aykroyd is doing an important thing: a poet writing about poetry, and with a spirit of awed enthusiasm" (Tim Buck, Spectral Lyre)
"Your life, with its immensity and fear,
...now bounded, now immeasurable,
it is alternately stone in you and star."
(from 'Evening', Rainer Maria Rilke,
translated by Stephen Mitchell)