The Dreamed Ones: Filming the Celan-Bachmann Letters 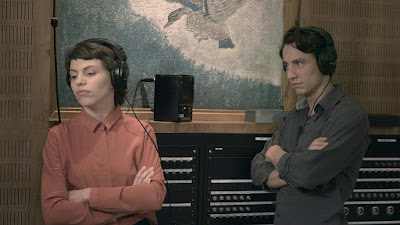 
Last week I went to see The Dreamed Ones (2016, directed by Ruth Beckermann) at Institut Français in South Kensington. I walked for over half an hour in a sleetstorm to get there - it's only been showing for a few nights here and there in the UK, so I was determined to see it.

The Ingeborg Bachmann-Paul Celan letters were first published in German in 2008, and a few years later in English translation. Prior to the publication of the letters, not much was known about the relationship between two of the greatest German-language poets of the 20th century (Bachmann was Austrian and Celan was a Romanian/Bukovinian German-speaking Jew. He is the very definition of 'hard to label'.) Celan and Bachmann met in Vienna in 1948 when he was 27 and she was 21. He wrote the poem 'In Egypt' for her 22nd birthday. They had an on-off affair/friendship, and correspondence, for 20 years, during most of which time they didn't see each other or only occasionally. Celan was married to artist Gisèle Lestrange when the affair resumed in the 1950s.

The Dreamed Ones (in German, with English subtitles) dramatises the letters by placing the audience in a studio with the young Austrian actors Anja Plaschg and Laurence Rupp, as they make a sound recording of the correspondence. That's all that happens. We see them recording some of the letters and bits of poetry; in between takes, they smoke, chat, flirt, and discuss the events and emotions behind the letters (for instance, why Bachmann chose not to send certain letters.)

That's all that happens, but the film was beautiful. The letters themselves are almost indescribable; passionate, tender, thoughtful, wistful, paranoid, hurt...

In mid-August I will be in Paris for just a few days. Don't ask me why or what for, but be there for me, for one evening, or two or three... Take me to the Seine, let us gaze into it until we become little fishes and recognise each other again. (Ingeborg Bachmann to Paul Celan)

How far away or close are you, Ingeborg? Tell me, so that I know whether your eyes will be closed if I kiss you now. (Paul Celan to Ingeborg Bachmann)

It does seem as though the passion and the darkness of the letters could be spilling over into the interactions between the actors, although this isn't explored too far. The playfulness and the silences between them illustrate something about how flesh-and-blood people interact or even fall in love, beyond the words. But this film is really about the words. There is something about the studio, and the faces (especially the eyes) of the actors, which create a space in which these letters can really breathe and live. I don't know how better to put it than that. The letters, beyond the pain and misunderstandings and imperfection, and the paranoia that Celan especially fell into, seem to achieve a spiritual-sensual level that I can't imagine many correspondences reaching, especially today. I just know that nothing really happened in this film but I didn't want it to end.

Posted by Clarissa Aykroyd at 21:13 No comments:


A few weeks ago I went to the Anselm Kiefer exhibition at White Cube Bermondsey, near London Bridge. This new exhibition, called Walhalla, runs until 12 February and it's free.

Anselm Kiefer, the German artist who was born just as World War II ended, produces art which is in a continual dialogue with Germany's history, with poets and philosophers, and with the times of rupture that we are living through. I went to his retrospective exhibition at the Royal Academy a couple of years ago and was blown away - which is a rare occurrence for me with contemporary art. You can read my thoughts about that exhibition here.

Kiefer's work feels shocking in the way that visiting the site of a concentration camp shocks. It's not so much what you see before your eyes as what seems to be in the air. It's a feeling of living in aftermath. The first thing I saw at White Cube was a long, dark hallway of hospital beds dressed with lead sheets. There was a warning not to touch the installations, as the lead could be dangerous.

Huge paintings of burning, crumbling towers - a spiral staircase draped with robes - a library-cum-apothecary bleeding film reels and pages... I found, as with the previous exhibition, that I was having an almost physical reaction to Kiefer's work. It seemed as though the world around me was going in and out of focus in a very unsettling way.

I went to that 2014 exhibition at the Royal Academy mainly because I had read that Kiefer was strongly influenced by Paul Celan. I wasn't disappointed, because there were works specifically inspired by Celan's poems. In Walhalla, the influence wasn't signalled quite so clearly. But then, in the cluttered room of giant drawers and film reels, I saw this: 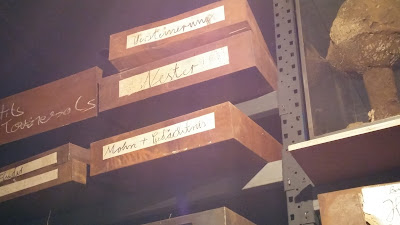 Mohn und Gedächtnis (written on the bottom drawer) means Poppy and Memory, and it is the title of Celan's second book of poetry. In an installation which reminded me very much of some crazed, broken apothecary, and in an artist's work which continually tries to deal with the worst of memory, it seemed very appropriate.

Later, on another work, I saw this: 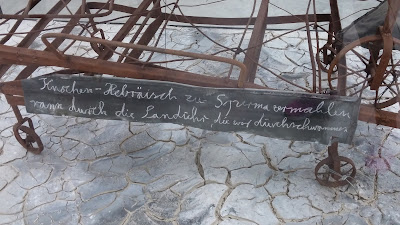 I had an eerie feeling when I saw this piece of writing. I don't actually speak German, but I was sure I recognised the words. I was sure I knew the poem and the exact lines it referred to. And when I checked later, I found I was right:

(from 'In Prague', translated by Michael Hamburger)

This happens to be one of my favourite poems by Celan, and the shock of recognising lines from it on the side of a work of art, in the original German, was considerable. I have to read his poems in translation, but usually I do so with the original on the facing page, and I do try to read and compare both. I was of course looking out for references to poetry and particularly to Celan, but it was a moment which brought home to me the intensity of my relationship with Celan's work.

You can read another review of Walhalla and find some good photos here: https://www.theguardian.com/artanddesign/2016/nov/21/anselm-kiefer-review-walhalla-white-cube-bermondsey

Email ThisBlogThis!Share to TwitterShare to FacebookShare to Pinterest
Labels: Anselm Kiefer, Michael Hamburger, Paul Celan, translation
Newer Posts Older Posts Home
Subscribe to: Posts (Atom)
"The Stone and the Star simply IS poetry" (Anthony Wilson)
"The Stone and the Star constantly surprises with new discoveries and reminders of old favourites... Fast becoming a stalwart of the UK poetry blogging scene" (Matthew Stewart, Rogue Strands)
"Clarissa Aykroyd is doing an important thing: a poet writing about poetry, and with a spirit of awed enthusiasm" (Tim Buck, Spectral Lyre)
"Your life, with its immensity and fear,
...now bounded, now immeasurable,
it is alternately stone in you and star."
(from 'Evening', Rainer Maria Rilke,
translated by Stephen Mitchell)