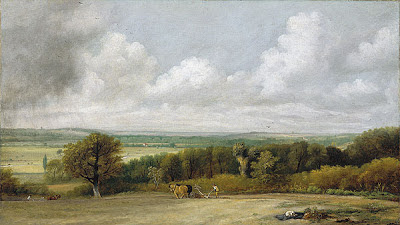 John Constable, A ploughing scene in Suffolk (A summerland), c 1824

When I lived in Canada, I was quite often asked if I was any relation to Dan Aykroyd, the Canadian actor. I am not - he belongs to the other branch of Canadian Aykroyds, who seem unrelated to my family (and furthermore, he pronounces it Ack-royd while we pronounce it Ayk-royd - which has caused no end of confusion over the years.) Living in England, I seldom get asked about Dan Aykroyd but I do get asked occasionally about author Peter Ackroyd (no relation) and very occasionally about artist Carry Akroyd (also no relation.)

A few days ago I went to the London launch for George Szirtes's Bad Machine (which is excellent) and chatted with a gentleman who I had met previously at one or two literary events, and also saw online occasionally on George's Facebook page (which is a bit like an online literary salon.) He asked me about my name and we chatted a bit about the people I wasn't related to. Later that evening, this gentleman messaged me through Facebook to say that at his local train station that evening, where people left books to trade, he had come across a copy of World War II poet Alun Lewis's letters to Freda Aykroyd and had wondered about the surname, given our conversation.

I was quite surprised by this coincidence, because I actually do have a family connection to Freda Aykroyd. She was the wife of my great-uncle W R Aykroyd, who was then the director of the Nutrition Research Laboratories in southern India. Freda Aykroyd and Alun Lewis met in 1943 and fell in love. Lewis's death in 1944 from a self-inflicted gunshot is thought to have been a likely suicide, and it is also thought that the affair had something to do with it. I have not read the letters, which were published as A Cypress Walk, but it seems that both were very aware that they were betraying spouses who they loved, and apparently Lewis's awareness was particularly acute. All the evidence suggests that he was also very much in love with his wife, Gweno.

The coincidence was made a bit stranger by the fact that this copy was signed by Juliet Aykroyd, who is Freda and Wallace's daughter and thus another of my distant-ish cousins, who also helped with the editing of the letters, I think. The people who were directly involved in the drama either died before I was born, or were sufficiently distant relatives that I would never have met them, and thus the story is on mostly an intellectual level for me. It is a strange, sad story to have in the family, though. I am quite unable to find such developments in people's lives romantic; just sad, mainly.

This rather long-winded anecdote did remind me that I have wanted to write about one of Lewis's poems, 'Raider's Dawn', and one of Thomas Hardy's, 'In Time of "The Breaking of Nations"', for some time. Here, first, is the Hardy poem, written during World War I, in 1916:


IN TIME OF "THE BREAKING OF NATIONS" (Thomas Hardy)


Only a man harrowing clods
In a slow silent walk,
With an old horse that stumbles and nods
Half asleep as they stalk.

Only thin smoke without flame
From the heaps of couch grass:
Yet this will go onward the same
Though Dynasties pass.

Yonder a maid and her wight
Come whispering by;
War's annals will fade into night
Ere their story die.


The title of the Hardy poem makes reference to Jeremiah 51:20 ("Thou art my battle axe and weapons of war: for with thee will I break in pieces the nations, and with thee will I destroy kingdoms.") The counterpoint to Lewis's reference to "Paper on paper,/Peter on Paul" - the falling of fragile pages from a Bible - is very interesting.

Essentially, I haven't come across anything to directly confirm it (if anyone has, please let me know) but I am absolutely convinced that these two poems are related. It seems to me almost impossible that Lewis wouldn't have come across Hardy's poem, and that 'In Time of "The Breaking of Nations"' wasn't either a conscious or a subconscious inspiration for 'Raider's Dawn'. The poems seem to reflect each other almost like mirror images.

The major difference is, of course, in the conclusions that the poets reach. Hardy saw that the war was changing the world around him, but he chose to focus on the eternal things that would outlive war; love, the basics of human survival, and so on. In Lewis's poem, ominously, the lovers are "Eternity's masters,/Slaves of Time", no longer lost in their own world, but observing the fall of bodies into mass graves. The concluding image of the "blue necklace" on the "charred chair" is especially haunting, and depressing. For me it seems to conjure up thoughts of the deserted house after the pogrom, or the aftermath of the atomic bomb. 'Raider's Dawn' seems to become the dark shadow of 'In Time of "The Breaking of Nations"', the final loss of innocence in World War II which began with World War I.

The John Constable painting above, incidentally, was chosen simply because Hardy's poem makes me think of Constable's paintings.

Posted by Clarissa Aykroyd at 21:48