Rilke's 'Archaic Torso of Apollo': "You Must Change Your Life" 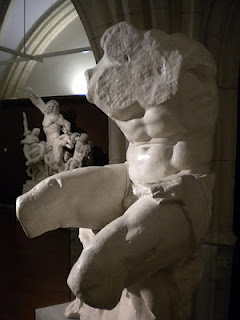 
The above link will take you to Stephen Mitchell's translation of Rainer Maria Rilke's 'Archaic Torso of Apollo'. It also includes a commentary by poet Mark Doty on the poem.

In a sense, there is not a great deal that I can add to the reams already written about Rilke. He is so pervasive and influential that you cannot be a poetry lover, or even an art lover in general, without coming across him repeatedly.

I have come to Rilke quite late, partly because of my mental semi-block about reading poetry in translation, for many years. Paul Celan was an exception. Something about his work told me to keep him in my life and to be patient, and this now seems to have been rewarded. Rilke is also a German-language poet - who knows, perhaps Celan and Rilke together will lead me to learn German. I would love to.

But in any case, I had no idea where to start with Rilke. I have still read relatively little of his work. In his poems, I've found a Romantic passion, a modern and forward-looking sensibility, an acute sensitivity to beauty, and a deep empathy for the human experience.

'Archaic Torso of Apollo' is a good place to start. It is thought to have been based on a statue in the Louvre, although I do not think that the exact statue is known for certain. It is a poem about the transformative power of art, and about deducing the whole from only a part. Perhaps as William Blake wrote: "To see a world in a grain of sand/And a heaven in a wild flower" ('Auguries of Innocence'). The poet, and the reader, can see implications in the statue which are not physically there. The person undergoing this artistic experience connects with the statue as though it still had a smiling, open, almost living face.

The concluding lines of the poem are like a blinding flash of light:

would not, from all the borders of itself,
burst like a star: for here there is no place
that does not see you. You must change your life.


This is grateful thanks to the transformative power of art, and a call to action. Even if the reader - or the viewer of the statue - were not involved at the start of the experience, they now are. It is a poem about messages that cannot be ignored.

Posted by Clarissa Aykroyd at 13:01