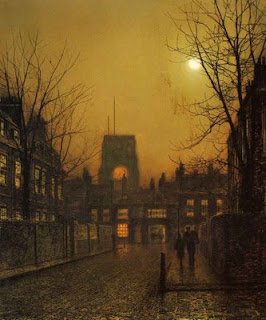 This is another painting by John Atkinson Grimshaw, depicting Chelsea in London. I think that you can expect to see Grimshaw at least occasionally on this blog when I write about London.

I'm still browing and reading through London: A History in Verse, edited by Mark Ford. This anthology really does capture the spirit of London - its events, places and people - across centuries. It is the dark and the light; I wonder if any other city has so much of each. Unified and scattered, sinister and exhilarating - I think London's poetry may carry its essence even more so than its art or photography, for instance. (But then, I would think that...) What fascinates me is that certain themes seem to flow down the centuries and recur so frequently. These include the city as a brooding, dark personality made up of tiny fluttering voices; the underground nature of London, whether that's the actual London Underground or its hidden and lost rivers; and the use of names, its streets and squares and boroughs, with an almost totemic power.

2012 is by some reckoning the 100th anniversary of the Imagist movement in poetry. This enormously influential movement, which helped to launch modernist poetry, concentrated on "clarity of expression through the use of precise visual images." Its early proponents included Ezra Pound and T E Hulme.

Another poet deeply involved in the Imagist movement was Amy Lowell (1874-1925). She was a highly prolific American poet (and businesswoman) who moved between the US and the UK, working to promote the Imagist movement in American poetry. She is now perhaps best known as a critic and anthologist, and as someone associated with more famous figures, but her poetry is wonderful in its own right and is recognised for its variety and sensuality.

This poem, 'A London Throughfare. 2 A.M.', is a bleak portrayal of the city, very closely observed. This is the city as state of mind, reflecting isolation and radiating hostility. It is easy to imagine that under similar circumstances, another poet (or even the same poet in a different frame of mind) might see the scene as beautiful. The fact that Lowell sees the distant moon as a friend, and the city as alien, is very telling.


They have watered the street,
It shines in the glare of lamps,
Cold, white lamps,
And lies
Like a slow-moving river,
Barred with silver and black.
Cabs go down it,
One,
And then another,
Between them I hear the shuffling of feet.
Tramps doze on the window-ledges,
Night-walkers pass along the sidewalks.
The city is squalid and sinister,
With the silver-barred street in the midst,
Slow-moving,
A river leading nowhere.

Opposite my window,
The moon cuts,
Clear and round,
Through the plum-coloured night.
She cannot light the city:
It is too bright.
It has white lamps,
And glitters coldly.

I stand in the window and watch the moon.
She is thin and lustreless,
But I love her.
I know the moon,
And this is an alien city.