MacLeish's 'You, Andrew Marvell': The Fall of Vast Empires 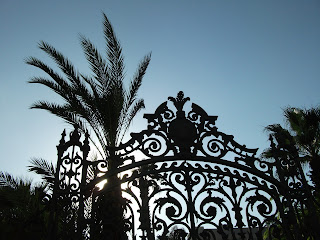 
The above link will take you through to 'You, Andrew Marvell' on the Poetry Foundation website, as well as other poems and biographical information about MacLeish.

I think that 'You, Andrew Marvell' - which I could probably rank amongst my favourite poems - was another random anthology-browsing discovery; not sure, though. I was a bit puzzled for years by the title, though I'd read Marvell by then. Marvell's 'The Garden' is definitely a favourite poem, and I would like to write about it another time.

Eventually I realised, or had it pointed out to me (probably the latter - I'm often quite slow on the uptake) that it was a reference to Marvell's 'To His Coy Mistress', the best pickup artist poem ever written by a long shot. The following lines from the Marvell poem are especially notable:


My vegetable love should grow
Vaster than empires, and more slow.
[...] But at my back I always hear
Time's winged chariot hurrying near;
And yonder all before us lie
Deserts of vast eternity.

'You, Andrew Marvell' is no kind of love poem - it is about the vast empires that Marvell alluded to, and their eventual fall and decay. The poem has a racing, incantatory energy which has sometimes been criticized as repetitive, but to me it makes the poem. I see the speaker on a beach, with a vision in his mind of night's shadow falling over the turning earth. But he sees more than nightfall; he sees empires being swept under. The places that he name-checks were once world powers, and now are entirely gone, or are only weak copies of their former glory.


MacLeish was American, and I picture the speaker on a beach in the Hamptons of Long Island, or perhaps Florida. The shadow has already passed over the westernmost parts of Europe; now it looms over the sea and advances toward the coast of America. What really makes this poem special, after all the forward momentum, is the deliberate breath drawn in the split last stanza:


Nor now the long light on the sea:

And here face downward in the sun
To feel how swift how secretly
The shadow of the night comes on...


Is it simply to draw breath? Is it fear, is it wonder?

I thought of this poem today partly because I hadn't read it for a while and I love it; but also, 2011 has surely been a year to reflect upon the fall of empires. There have been few years like it in my lifetime.

I took the above picture in Cairo in August/September 2010, at the gates of the Egyptian Museum. Only a few months later the country was flung into upheaval with the Egyptian Revolution - outside those very gates, and occasionally inside - and the growing impetus of the Arab Spring. Recently I saw a photo from 2010 of an African-Arab summit where the leaders of Yemen, Egypt, Libya and Tunisia all stood together in the front row. Now, all have fallen and one is dead.

Other "empires" have been shaken; Japan, one of the largest economies in the world, after an appalling disaster which killed tens of thousands; the financial powers, through economic crisis and protest movements. This has been a momentous year. What will 2012, now so close, bring?