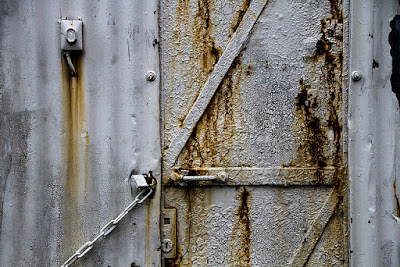 We are closed (and do not open tomorrow) by Sten Dueland. Used under Creative Commons license.


The 20th anniversary of the Srebrenica massacre, which took place in July 1995 during the Bosnian war, has made me think of the poem 'A Disused Shed in Co. Wexford' by Derek Mahon.


'A Disused Shed in Co. Wexford' has always seemed to me to be a totally unique work of art, and one of the greatest poems of the last century. Recently it was on the shortlist for the RTE-sponsored A Poem for Ireland competition, and although it lost out to Seamus Heaney's 'When All the Others Were Away at Mass', I think it would have been a worthy winner.

This is the ultimate microcosm poem; millenia of hardworking, suffering and lost human beings are drawn down to a sad little colony of mushrooms in a quiet corner of a small Irish county. The construction of the poem is extremely subtle, I think. It opens with a broader view - "Even now there are places where a thought might grow" and glimpses of a "Peruvian mine" and "Indian compounds". But then the view narrows to such an extent that it's as though you are in the shed with the mushrooms.

A thousand mushrooms crowd to a keyhole.
This is the one star in their firmament
Or frames a star within a star.

Ominously, the shed is actually part of a "burnt-out hotel". Is this a glimpse of some post-apocalyptic near future, or at least some local catastrophe?

As I read the poem there is a sense of advancing down a path, increasing clues as to the true nature of the poem. Words such as 'civil war', 'deaths', 'nightmares', 'regime' and 'firing-squad' multiply. The poignancy of the scene is immense, even before the last stanza, when the nature of its message becomes plain.

'A Disused Shed in Co. Wexford' is not just about genocide or man's inhumanity to man; it is more generally about the sadness of human loss and the fact that most human accomplishments, and most individuals, are utterly forgotten. I thought of the poem today, though, because of the line in the last stanza: "Lost people of Treblinka and Pompeii!" This is a terrible cry, wrenched painfully from the speaker, and seeming to sum up so much of the pain of Europe and the world. It's what echoes in my mind as this extraordinary poem draws to a close.

Posted by Clarissa Aykroyd at 23:29