Adrienne Rich's 'I Dream I'm the Death of Orpheus': "A Woman With a Certain Mission" 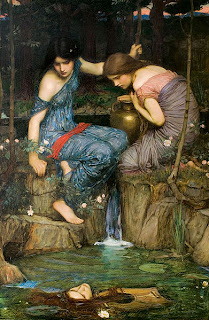 Adrienne Rich, one of the outstanding American poets of the twentieth century and a feminist icon, recently died in California at the age of 82. Many bloggers posted tributes and many articles appeared, but I decided to hold off until I found a poem that I wanted to write a little bit about. I admire what I have read of Rich's work, but that has not been a great deal, so far. 'Diving Into the Wreck', about myth and psychological exploration and identity, is an amazing poem.

I came across this poem, 'I Dream I'm the Death of Orpheus', while looking through articles on Rich and collections of poems, and it really made an impact on me. The Poetry Archive also has a recording of her reading the poem.


I DREAM I'M THE DEATH OF ORPHEUS (Adrienne Rich)


To give the mythological context (which I wasn't very familiar with, so apologies to those who are), Orpheus (of Orpheus and Euridyce fame) died at the hands of the Maenads, frenzied female worshipers of Dionysus. The stories seem to vary, saying that he angered the Maenads by turning from the exclusive worship of Dionysus, or that he had forsaken the love of women after the death of Eurydice. In any case, the story has obvious totemic power in turning the tables on traditional male oppression of women. The above painting is by Pre-Raphaelite painter John Waterhouse, of the discovery of Orpheus's head by nymphs after his death. Ursula Le Guin has also written an interesting poem, 'The Maenads'.

In 'I Dream I'm the Death of Orpheus', Rich invokes both mythology and modernity; her Maenad figure is driving the poet's body in a black Rolls-Royce, and she has "contacts among Hell's Angels". The language suggests that this woman is caught in a spiral of both power and uncertainty; she certainly feels her own strength, "in the prime of life", but she repeats such phrases as though to reassure herself. The figure of the male poet seems like something she has killed within herself, in "these underground streets", to set herself free, but will she resurrect him "to walk backward against the wind/on the wrong side of the mirror"? What will destroy her and what will liberate her? This questions all arise through an edgy, paranoid night-time vision, the Maenads of ancient Greece meeting something like the Chicago Mob.

Adrienne Rich was a great poet and will be much missed.
Posted by Clarissa Aykroyd at 23:13