In Which Louis MacNeice and I Run Off To Bulgaria 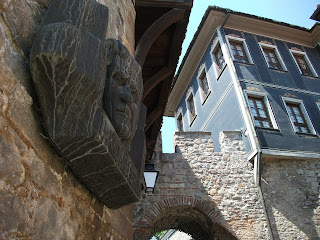 A few days ago I returned from a week-long visit to Bulgaria, a country I never really thought I would go to. My friend who I visited there and who introduced me to the friends and sights of a country she has adopted for several years now probably never really thought I would come either - I had been vaguely promising to visit for quite a long time.

Anyway, I made it, and I thoroughly enjoyed it. I intend to write another post with more about my trip and about some interesting and unexpected poetic encounters. But for now, I thought I would post a poem which I wrote over the last couple of days. I can't quite explain its genesis. Travel to different countries often inspires me to poetry, but after my return, I wasn't sure if there were signs that this was going to happen with Bulgaria. I started to reflect on how Louis MacNeice, one of my favourites (and a man who features prominently on my Dead Poet Crush list) would have found meaning and metaphor in the concrete, sensual details of what he saw around him. Then I imagined that he was in Bulgaria with me. It's poetry; we're allowed to do this sort of thing.


Louis, you would have found l’air du temps
in the dark clouds banked over that huge echo
of a post office, where I wandered like an extra
in a film. I couldn’t read the people in Plovdiv
or Sofia for that matter, but reflected in their eyes
I glimpsed the wolves craning their necks to howl.
You would have laughed as I ducked at lightning,
not letting me forget my sunglasses
at the internet café. Internet? Not a problem;
you’d seen the river, the snake of modernity
biting its own tail. The tide of metaphor
in the chocolate flood of meltwater
on the mountain roads to Smolyan,
the startled gaze on the mirrored faces.
Louis, I tell myself you would have been practical
and strong, and time would have left us
to watch Roman stones and their invisible shift,
to hear the violin’s slim notes slip the window,
to put out a finger and stroke the curving flask
of green glass, to buy a drink for experience.


© Clarissa Aykroyd, 2012. Not to be reproduced without permission.

Posted by Clarissa Aykroyd at 22:25

Email ThisBlogThis!Share to TwitterShare to FacebookShare to Pinterest
Labels: Bulgaria, Louis Macneice, my own poems