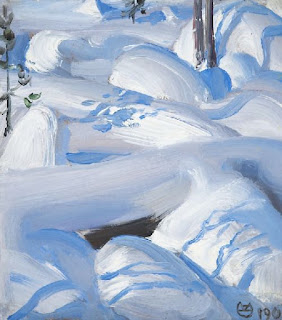 A non-definitive list of the ten poems which have been particularly significant in inviting me into the world of modern, almost-modern, post-modern and contemporary poetry would likely include the following:

I've written about some of these before, and they could probably all be an essay in themselves. To use one of my favourite over-used words, it is a pretty random list. Poems discovered by chance, poems studied in high school or university, poems which I wasn't sure I liked at the time but which ultimately took on greater meaning, poems I heard read by the poet themself (T S Eliot, I wish! In this case, Al Purdy), poems which led me on to poems I preferred by the same poet...and so on.

I've written before about the modern Canadian poetry class which I took in university and which turned out to be very pivotal in my literary life. Among other significant moments, I discovered P K Page in this class, and that was hugely important for me. 'Stories of Snow' can lay claim to being one of the greatest Canadian poems of all time, and simply a great poem, and you can read it here. (Due to the way the poem is reproduced, be prepared to page over a couple of times - it's a long-ish poem.)


The Canadian landscape, the landscape of the West Coast rainforest I grew up in, the tropics, Northern Europe - all of these are invoked. More than this, these are emotional and metaphoric landscapes, snowy and blossoming worlds of poetry.

In that forwards/backwards/memory/premonition way which I've come to recognise, it seems as though this poem ties in with my Antarctic fascination (although that came a little later than my first reading of this poem). In the end, the reader is invited to "unlock/the colour with its complement and go/through to the area behind the eyes/where silent, unrefractive whiteness lies." P K Page was also a talented artist, and her poems are often powerfully visual, so there is an element of artistic curiosity and exploration here.

I feel, though, that these are mainly emotional landscapes and that this has something to do with my metaphoric/semi-realistic desire to escape the twittering and the human difficulty of the modern world and to go to Antarctica - somewhere more peaceful, where access to what is truly important becomes more direct and less encumbered. "Souvenir of some never nether land": this could be ancestral memory, too, or something that I'd pass on if I ever had descendants; again, forwards/backwards/memory/premonition. I'm just waiting to find out that I had an ancestor who went to Antarctica, though I would likely have heard about it by now.

The painting is by Akseli Gallen-Kallela, the magnificent Finnish artist.
Posted by Clarissa Aykroyd at 16:45