'Red, Like Our Room Used To Feel' at the Battersea Arts Centre 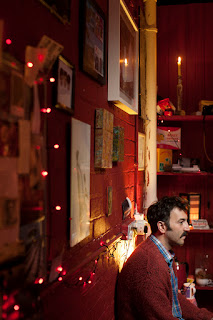 Red, Like Our Room Used To Feel photo by Peter Dibden Photography


I went tonight to a poetry performance at Battersea Arts Centre called Red, Like Our Room Used To Feel. I had pre-booked my ticket, but I was on my way home from a Pilates class and I have to admit that it crossed my mind to skip it, especially when the bus was late and I wondered if I would be on time. I was on time, in the end, although I'm not sure how much it would have mattered.

I don't want to give too much away, although I think the performance is only running for a couple more days. I will say that when you walk into the venue to collect your ticket, and they tell you to go sit on the red and white stripey chair around the corner "until he's ready to come and get you", you know that something interesting is going to happen.

There was a door that had to be opened and a choice to be made; a bit ominously, Bluebeard and The Merchant of Venice both came to mind, but the experience was far warmer and more beautiful than this might have suggested. There was also a glass of port (or a cup of tea). Poems are read to you - directly to you. The room is full of ephemera, old postcards, typewriters, random scribbled notes, a box of Yorkshire Tea. There is music.

It was all rather magical. I'm a bit at a loss as to how to describe it, especially without giving everything away, but even if I described it in minutest detail I couldn't really convey the sense of comfort and nostalgia. It was certainly one of the most unique poetry experiences I have ever had, if not one of the most unique experiences full stop. One of the poems contained an apology, too. I really liked that. It was like the apology you've waited for forever, from someone you used to care about, that you didn't think would ever come.

Here is a link to the event on the Battersea Arts Centre website, although it will probably expire shortly: http://www.bac.org.uk/whats-on/red-our-room-used-feel/

Originally from the United States, the artist, Ryan Van Winkle, is currently Poet in Residence at Edinburgh City Libraries and has also been the Scottish Poetry Library's Reader in Residence. Here is his website: http://ryanvanwinkle.com/

Posted by Clarissa Aykroyd at 23:15