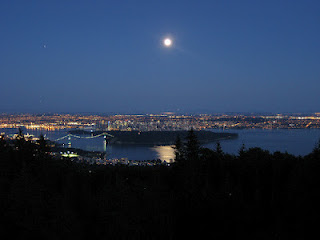 Photo of Vancouver by keepitsurreal. Used under Creative Commons license


The following link will take you to 'Vancouver Lights' by Earle Birney, as well as other poems and biographical information, on the University of Toronto Canadian Poetry website:


I returned from my holiday on the West Coast of Canada a few days ago (and so far have failed pretty miserably with the jet lag). Most of my time was spent in Victoria, on Vancouver Island, a few hours by ferry and car from Vancouver. My parents live in Victoria, where I grew up, and I spent time with them and catching up with some friends. My brother lives in Vancouver, so I usually spend at least a day there as well.

Although I didn't take the above picture - which vividly captures Vancouver by night - I have seen this view or very similar views. I particularly remember my cousin's wedding reception on Grouse Mountain. I have never skiied Grouse, but it is reckoned to have perhaps the best night skiing in the world, and I can believe it. Even just standing on the deck of that restaurant, looking out over the city, I felt as though the eternal dream of flight was not far away. Skiing down towards that "winking/outpost" - yes, that would be flight. Perhaps I will try it some day yet.

I bought Earle Birney's Selected Poems (One Muddy Hand) at the wonderful Munro's Books in Victoria, and I've already loved what I've browsed. I had not yet read many of his poems, although he is one of Canada's most significant poets and an influence on the likes of Al Purdy. His poems tend to run in long loose lines, but still with a sense of tautness and structure. He wrote love poems, poems about Japan and South America, and great poems about Canada. 'Vancouver Lights' is one of his best-known works.

I've seen that throbbing glow of cities by night, and Vancouver surely is "this twinkle we make in a corner of emptiness", relatively speaking. It is far away from most of the rest of the world. I now live in a city at the centre of the world (also relatively speaking), and so I'm acutely conscious of how far away the place I grew up is. Not by the standards of Australia or New Zealand, perhaps, but the Pacific Rim towns and cities certainly have an edge-of-the-world vibe. On the flip side of this poem's darkness, there is a Pacific light that is like nothing else. I saw it in Japan, too, where I was frequently and sharply reminded of where I grew up. Architecture and Asian culture, yes; but also the light.

In this poem, Birney primarily conjures the light of humanity. "These rays were ours/we made and unmade them". I love the West Coast for its natural beauty and laid-backness, for the mountains, and for the sea, perhaps above all in terms of nature. The older I get, though, it seems that people have grown more and more important to me, in all their complexity. In moments of extreme complexity I wish I could free myself from this, but I can't, and wouldn't really want to. The lights of this poem remind me of the people I'm so far away from and love so much.

Posted by Clarissa Aykroyd at 17:00