"Horsemen for Companions": Me At Royal Ascot, Yeats At Galway Races 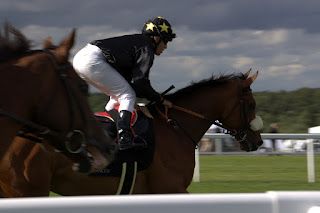 I spent yesterday at Royal Ascot, thanks to a friend's generosity. Lunch, Pimms, fascinators and funny hats, the Queen, people-watching, good company, and horses horses horses...pretty much a perfect day. I loved seeing a microcosm of the English personality in this event.

I think this was the third time I'd been to the races, and it eclipsed my visits to the small racetrack outside my hometown in Canada - the last of which was more than twenty years ago, when I was a horse-obsessed child. I have very mixed feelings about racing, but I couldn't help being caught up in the beauty of the horses. If you want someone gorgeous and neurotic in your life, you could do worse than to go for a Thoroughbred. I'm a non-gambler and some say that takes the fun out of watching racing, but I didn't even care who won. I don't have a gaming mentality in the least, anyway. I felt swept away every time the horses went past me, whether cantering down to the gate, or streaming at high speed to the post. I was too busy capturing and filing away moments - the checkerboards and little stars brushed into gleaming hindquarters, the dilated nostrils and shining eyes, the beautiful angular flow and colours as they ran down the track, like a Raoul Dufy painting - to really care about the outcome. And at least turf racing isn't quite as rough as dirt racing.

I also couldn't help thinking that I was probably enjoying myself a lot more than some of the posh people who come every year. I don't quite know how, but even after years of living in London I've managed to maintain a totally unjaded attitude towards special experiences; perhaps because I do view them very strongly as being special. I'd rather have my starry-eyed moments of wonder than become someone who always compares an experience unfavourably to the last one that vaguely resembled it. It's one thing that I've found very valuable in my life.

I'm not that familiar with poems of the horse racing world, and I invite anyone to make suggestions if you wish. I thought of this poem by W B Yeats, 'At Galway Races'. The Galway Races are still a famous racing meet in Ireland, and one that I thought I might go to when I lived there but never did. A different atmosphere from Ascot, I imagine. This is a mid-period Yeats poem, and I imagine that as well as evoking the sweep and rush of a racecourse, he was also thinking more broadly of the "indomitable Irishry" who he referred to in 'Under Ben Bulben', and their potential for the nascent future of Ireland. I wonder if he ever went to Ascot or what he would have made of it. Yeats was Anglo-Irish - my own ancestry is partly Anglo-Irish, and when I researched and wrote about Jonathan Swift a few years ago, I realised that I related strongly to these men's conflicted view of Ireland, from my few years living there.

Anyway, the poem, which would find a place somewhere among my many Yeats favourites:


AT GALWAY RACES (W B Yeats)

There where the course is,
Delight makes all of the one mind,
The riders upon the galloping horses,
The crowd that closes in behind:
We, too, had good attendance once,

Hearers and hearteners of the work;
Aye, horsemen for companions,
Before the merchant and the clerk
Breathed on the world with timid breath.
Sing on: somewhere at some new moon,
We'll learn that sleeping is not death,
Hearing the whole earth change its tune,
Its flesh being wild, and it again
Crying aloud as the racecourse is,
And we find hearteners among men
That ride upon horses.