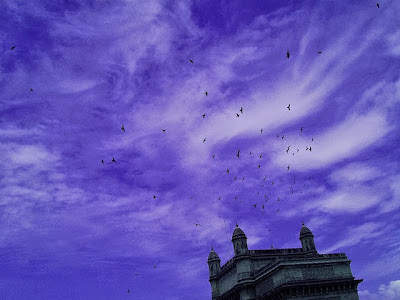 Birds over Gateway of India by Swaminathan. Used under Creative Commons license

The supple sweeper girl goes by
Brushing the dung of camels from the street
The daylight's silver bangles
Glitter on her naked feet.

Yellow ramtilla stiffens in the noon,
Jackals skulk among the screes,
In skinny fields the oxen shiver,
The gods have prophesied disease.

Hedges of spike and rubber, hedges of cactus,
Lawns of bougainvillea, jasmine, zinnia
Terraces of privilege and loathing,
The masterly shadows of a nightmare

Harden and grow lengthy in the drought.
The moneyed antipathetic faces
Converse in courts of pride and fountains
With ermined sleek injustices.
Gods and dacoits haunt the mountains.

Denying what each flowering pear and lime
And every child and each embrace imply -
The love that is imprisoned in each heart
By the famines and fortunes of the century.

Night bibles India in her wilderness
The Frontier Mail screams blazing with such terror
The russet tribesman lays aside his flute
Rigid with Time's hypnotic surging error.

The kindness of the heart lies mute
Caught in the impotence of dreams
Yet all night long the boulders sing
The timeless songs of mountain streams.


In 2015, it is one hundred years since the birth of Alun Lewis, one of the Big Three of British World War II poetry along with Keith Douglas and Sidney Keyes. Like Keith Douglas, Lewis died in 1944, while Sidney Keyes died in 1943. All were young, but at 28, Lewis lived the longest by a few years. I have written a little more about him here.

Out of the Lewis/Douglas/Keyes trio (none of whom knew each other, although Douglas and Keyes may have crossed paths), Douglas is - to me - by far the most contemporary. He wrote cold, cutting poetry which in most particulars could have been written in recent years. Lewis and Keyes were more in a backwards-looking Romantic tradition, although Keyes was so young when he died that I hesitate to say which direction he would ultimately have taken with his work.

'Indian Day' is taken from Lewis's collection Ha! Ha! Among the Trumpets, the title of which refers to the description of a war horse in the Biblical book of Job. It was published posthumously in 1945. Lewis was posted to India in 1942 and was deeply moved by the striking sights and violent poverty of the country. This was one of the poems which resulted.

'Indian Day' doesn't exactly escape cliches about the subcontinent, especially those that would have been implicated in the colonial gaze of the time. The view of the "supple sweeper girl" is a bit voyeuristic (without being particularly perceptive) and the conclusion that "love...is imprisoned in each heart" isn't that exciting. But this is still a hugely evocative poem with unforgettable lines - "The sun the thunder and the hunger grow" and "Night bibles India in her wilderness" (the latter made me think of another Welshman, Dylan Thomas, who a few years later wrote the words "starless and bible black" in his play Under Milk Wood. The seriousness of the black-covered Bibles seems to me very evocative of nonconformist Wales.)

Posted by Clarissa Aykroyd at 11:27