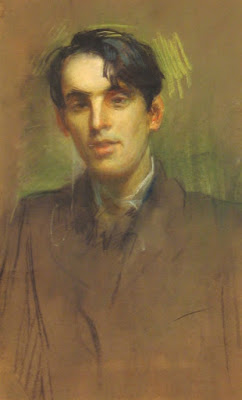 
I was in Dublin for a few days last week. I used to live there - ten years ago and more - as readers of this blog may already know, but I hadn't even been back for a visit for several years.

This felt like my most successful visit back to Dublin so far. I had an informal to-do list - seeing friends, catching up with family, the seaside, galleries, the theatre (Brian Friel's version of Turgenev's A Month in the Country, at the lovely Gate Theatre), the pub. And I got through everything on that list. Notably, my relationship with Dublin felt happier than for a long time. Dublin still lives in me, in the way that a city where you spent some of your formative years (my early twenties) will do that. I stared at the dank Liffey and the springy Ha'penny Bridge, thought about history in front of the General Post Office, sheltered from the rain in the Winding Stair bookshop, and on Grafton Street I realised that someone there is always playing Hallelujah. I also remembered the time a bus driver flirted with me by paraphrasing Yeats's 'He Wishes for the Cloths of Heaven'. (Quoting poetry will always get you points for effort, boys.)

On my last day I went to the Hugh Lane gallery. They were featuring an exhibition based on the Yeats poem 'The Municipal Gallery Revisited', where Yeats revisited friends - Synge, Lady Gregory and others - and great figures of the time, by gazing on their paintings at the gallery. They had pulled out those very paintings he gazed upon and put them together, with the full poem reproduced on the wall and then the specific lines next to each painting. It was extremely moving. Yeats had a way of transfiguring people - of course, he knew some of the strongest and most influential personalities of his time, but through his eyes they became sort of super-cinematic, in the most profound way. So many things inspire me about Yeats's poetry, but perhaps more than anything, no one else can retain and glorify the personal, the public and the symbolic so powerfully. The people in his poems are living breathing friends, enemies and lovers, but they are also archetypes.

Around me the images of thirty years:
An ambush; pilgrims at the water-side;
Casement upon trial, half hidden by the bars,
Guarded; Griffith staring in hysterical pride;
Kevin O'Higgins' countenance that wears
A gentle questioning look that cannot hide
A soul incapable of remorse or rest;
A revolutionary soldier kneeling to be blessed;

An Abbot or Archbishop with an upraised hand
Blessing the Tricolour. 'This is not,' I say,
'The dead Ireland of my youth, but an Ireland
The poets have imagined, terrible and gay.'
Before a woman's portrait suddenly I stand,
Beautiful and gentle in her Venetian way.
I met her all but fifty years ago
For twenty minutes in some studio.

Heart-smitten with emotion I sink down,
My heart recovering with covered eyes;
Wherever I had looked I had looked upon
My permanent or impermanent images:
Augusta Gregory's son; her sister's son,
Hugh Lane, 'onlie begetter' of all these;
Hazel Lavery living and dying, that tale
As though some ballad-singer had sung it all;

Mancini's portrait of Augusta Gregory,
'Greatest since Rembrandt,' according to John Synge;
A great ebullient portrait certainly;
But where is the brush that could show anything
Of all that pride and that humility?
And I am in despair that time may bring
Approved patterns of women or of men
But not that selfsame excellence again.

My mediaeval knees lack health until they bend,
But in that woman, in that household where
Honour had lived so long, all lacking found.
Childless I thought, 'My children may find here
Deep-rooted things,' but never foresaw its end,
And now that end has come I have not wept;
No fox can foul the lair the badger swept --

(An image out of Spenser and the common tongue).
John Synge, I and Augusta Gregory, thought
All that we did, all that we said or sang
Must come from contact with the soil, from that
Contact everything Antaeus-like grew strong.
We three alone in modern times had brought
Everything down to that sole test again,
Dream of the noble and the beggar-man.

And here's John Synge himself, that rooted man,
'Forgetting human words,' a grave deep face.
You that would judge me, do not judge alone
This book or that, come to this hallowed place
Where my friends' portraits hang and look thereon;
Ireland's history in their lineaments trace;
Think where man's glory most begins and ends,
And say my glory was I had such friends.