The Sign of Four, the City In My Head and the Map of Poetry 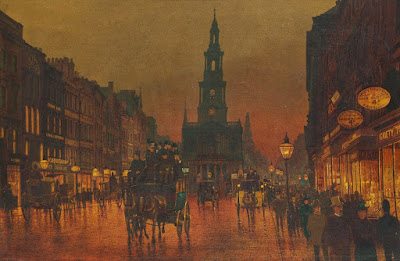 The Sign of Four has often (not always) been my favourite of the four Sherlock Holmes novels. Since I moved to London, it has taken on more (or other) significances, and especially since I moved to south London over five years ago. The Sign of Four is a real London book and a great deal of it happens in south London - near where I live, no less. There are key scenes which occur around Nine Elms and Millbank, and when I lived in Stockwell (by Larkhall Park) I was quite delighted by this moment:


Sherlock Holmes was never at fault, however, and he muttered the names as the cab rattled through squares and in and out by tortuous by-streets.

"Rochester Row," said he. "Now Vincent Square. Now we come out on the Vauxhall Bridge Road. We are making for the Surrey side, apparently. Yes, I thought so. Now we are on the bridge. You can catch glimpses of the river."

We did indeed get a fleeting view of a stretch of the Thames with the lamps shining upon the broad, silent water; but our cab dashed on, and was soon involved in a labyrinth of streets upon the other side.


For a couple of  years I was often in the vicinity of Coldharbour Lane, and it's still not a very fashionable region. I think of The Sign of Four every single time I find myself down there. Such is the power of literature at an impressionable age.

Other scenes take place around Norwood. Conan Doyle lived there for a time, but apparently the evidence suggests that he did not know London as well as you might conclude from the Holmes stories, and that he may have relied quite heavily on maps. This actually makes sense, and it works quite well for the reader. There are some extraordinary set-pieces in the Holmes stories - in The Sign of Four, one that comes to mind is this foggy description on the Strand:


Down the Strand the lamps were but misty splotches of diffused light which threw a feeble circular glimmer upon the slimy pavement. The yellow glare from the shop-windows streamed out into the steamy, vaporous air, and threw a murky, shifting radiance across the crowded thoroughfare. There was, to my mind, something eerie and ghost-like in the endless procession of faces which flitted across these narrow bars of light, - sad faces and glad, haggard and merry. Like all human kind, they flitted from the gloom into the light, and so back into the gloom once more.


There is also a very wonderful pursuit along the Thames, among other scenes. I love the south-London-ness of this book, the sense of staying in the "great cesspool" but moving into something wild and vast - north-of-the-river folk still see south London in this way. A lot of the dark deeds of the Holmes tales take place in south London or the southern outskirts of London.

There is something about the "map" quality of The Sign of Four, and the way it careers around London, which I associate very strongly with my own perceptions of the city. I feel like I carry London in my head - a map, but more than a map. In certain areas, it's as though I can see all the layers superimposed at once - past, present and future times, stories, songs, and more. And wherever I am in London, I feel an awareness quivering from other parts of the city - places I know, people I care about, all moving around and past and through each other. The way Doyle wrote, in map-speak combined with dramatic set-pieces, allows readers to fill in the gaps with their own London. I did this with his stories before I ever visited London, and I have continued to do so ever since, with the real London and with my own perceptions of it from the past and present, all layered and still present to each other.

Does this have a relevance to poetry? Well, I think that poetry is a certain kind of free-association combined with great precision, and to me there is something very maplike about it. The connections which turn into the flashpoints of poems are like transport links and connections around the city, often moving with speed to very disparate parts of London. And the map of any given poem - in physical space, emotional space, and time - builds and superimposes like the palimpsest of London in my head.

And for anyone who's stuck with me to the end of this entry - are there poems to accompany these thoughts? I had thought that this might be a moment to discuss London poems, but instead two great poems about maps and water (on one level, and among other things) came to mind. I have linked to them below. Maps and water are actually both very important to The Sign of Four, so this is appropriate. Beyond that, perhaps you will have to try and trace my train of thought with the clues I have left, and if you can do that, I congratulate you, my dear Watson.

DIVING INTO THE WRECK (Adrienne Rich)

Posted by Clarissa Aykroyd at 22:33