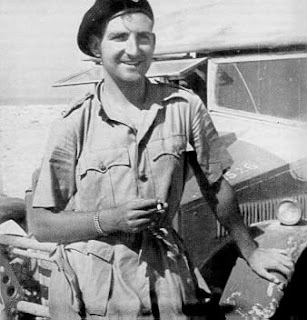 
Living in a wide landscape are the flowers -
Rosenberg I only repeat what you were saying -
the shell and the hawk every hour
are slaying men and jerboas, slaying

the mind: but the body can fill
the hungry flowers and the dogs who cry words
at nights, the most hostile things of all.
But that is not new. Each time the night discards

draperies on the eyes and leaves the mind awake
I look each side of the door of sleep
for the little coin it will take
to buy the secret I shall not keep.

I see men as trees suffering
or confound the detail and the horizon.
Lay the coin on my tongue and I will sing
of what the others never set eyes on.


I have a habit of relating poems of the past to current events, Sometimes it's the whole poem, sometimes just a phrase. Sometimes I'm sure it's a bit of a leap. But when I do it, it always feels true. And surely the capacity to stand outside time, but within patterns and feelings, is one sign of a great poem.

I started thinking about 'Desert Flowers' again in the wake of the November 13 attacks in Paris. There is so much about this poem that cuts both ways, or all ways...it must be the most delphic of all his poems. Flowers are left to remember the dead, for comfort; but in this poem of the Western Desert Campaign in World War II, they are also "the hungry flowers", devouring the body (perhaps the flowers of artillery fire?).

I wonder very much what Douglas was thinking of when he wrote this poem. It makes me think of concepts such as trauma, the reach and limitations of insight, and what we can learn from the dead. Partly because Douglas was still so young when he died, I tend to feel that he was often writing on a subconscious level that he was consciously not able to fully understand. In other words, he wanted to convey something journalistic and real, and his poems did that, but they were also much deeper than he realised. To a certain extent this happens with all good poetry and poets, but Douglas's poems have always seemed to me to have a real core depth, especially for a young writer.

Throughout the poem Douglas seems to be looking for, or invoking, other voices. In the second line he calls on Isaac Rosenberg, the great World War I poet. If you read Rosenberg's great poems, you will find similarities in their approaches - both poets strove for accuracy and detachment, not romanticism. The parallels between the natural world and the human world are harsh and striking: 'the shell and the hawk every hour/are slaying men and jerboas' - and then Douglas adds 'slaying/the mind'. This is where trauma enters the picture for me. The speaker is a man who cannot fully cope with what he is experiencing; this is one reason for detachment. The pressure on his mind, even the threat of mental death, is too much.

There is a hermetic quality to this poem, and 'the secret I shall not keep' is one of the most mysterious images of all. Is it poetry? Is it the ability to transcend the horrors that humanity witnessed in the World Wars, and that it keeps witnessing? The striving after vision in this poem is intense - incredibly intense, almost desperate. As close as he may get to the truth, Douglas suggests, his vision will be imperfect. Here, with 'I see men as trees suffering', Douglas makes reference to the account of Jesus healing the blind man at Bethsaida (Mark 8:22-25). When the man's vision was at first partially restored, before a complete restoration, he said 'I see people, but they look like trees walking about' (Mark 8:24, New World Translation; 'I see men as trees, walking', King James Version). 'I see men as trees suffering' is also a blurred vision, but a terrible one, and wholly evocative of the horror and confusion of the battlefield - or even an act of terrorism. It's the moment after the bomb-blast.

The last two lines, as often in Douglas's poetry, seem to look onwards to his own death. The coin, which has already appeared earlier in the poem, here becomes a clear symbol of passage to the land of the dead, when laid on the speaker's tongue: Charon's obol, or the payment for the ferryman who took the dead across the river Styx.

Strangely, though, Douglas also suggests that this coin will open his mouth, or allow him to speak (or sing). How is this possible if he is dead? I see nothing in the poem to suggest that he is writing about ghostly visitations. I think that Douglas may be saying that when he is dead, his words will have a deeper meaning that they couldn't have in his life. They will become a vision that no one else could have had. And in a sense this is true: we perceive his poems differently because he died so young, in a great war, and perhaps those facts have given his poems deeper meaning and significance. This is how the dead can speak to us, in a manner amplified by their deaths.

This is perhaps where and why I thought of the poem in relation to the terrible events of recent weeks. It is a tragic fact that the dead can be transfigured by their deaths. They take on a meaning that they never had in life. Depending on the manner of their death, others (such as politicians) may also try to give them a meaning that those people would not have asked for or desired in life. And the sad thing is that although the dead speak to us in this way, living humans do not learn the lessons.

Posted by Clarissa Aykroyd at 00:11