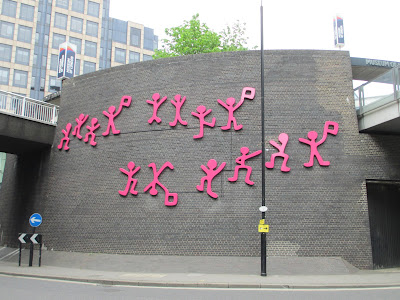 'Dancing Men' from the 2015 Sherlock Holmes exhibition at the Museum of London. Photo by Clarissa Aykroyd


Messrs Cumberbatch and Freeman are just about to return to our screens as Sherlock and John, although this time around they will really be 'Holmes and Watson', in a one-off Victorian episode. I'm looking forward to seeing whether they can come close to the greats - Jeremy Brett, David Burke and Edward Hardwicke.

I've been writing poetry about Sherlock Holmes this year - inspired by many different aspects of the stories and the different portrayals over the years - and a few of the poems were published. So to end the year, here's another poem, this one based on the Cumberbatch/Freeman modern-day series.


Sherlock's mouth is a typewriter: he's spinning out the tale to the sharp end of his breath.
He'll cut and make it neat with his cheekbones.

Sherlock is downloading your brain to his hard drive.
He is uninterested in your heart, except when it threatens to break the machine, your soul.

Sherlock's pale eyes have narrowed to tiny keyholes.
He may have to kill you, but he will look so good while doing it.

Sherlock is talking to a skull, but he may talk to you if you stick around.
He's the mind of this city, but you keep him from the fall with your words, your light.

Email ThisBlogThis!Share to TwitterShare to FacebookShare to Pinterest
Labels: my own poems, Sherlock Holmes