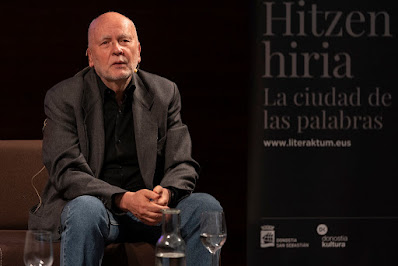 The great Polish poet Adam Zagajewski died on 21 March of this year - which was also World Poetry Day - and it has taken me this long to write about it. The coincidence of the date was a poignant one because I have often thought of and shared his poems on World Poetry Day and similar days for the discovery and appreciation of poetry. He was the ideal poet for the purpose.
A few of my very favourite writers have died in the past year, but this death was perhaps even a little harder to come to terms with as Zagajewski was only 75, relatively young. It's also simply difficult to imagine him gone. Whenever I thought of him, he was somewhere in Central Europe writing outdoors at a café, or reading at some gathering of world poets.
I think Adam Zagajewski's poems were easy to love, which is no bad thing. When I think of his poems, words such as the following come to mind: humane, gentle, affectionate, clarifying. After 9/11, his poem 'Try to Praise the Mutilated World' became very famous in its English-speaking translation by Clare Cavanagh when it appeared in The New Yorker. Not one of my personal favourites of his poems, I still appreciate it and its immense value in the wake of a huge, world-changing tragedy. It distills what I think Zagajewski did best - the acknowledgement that dark, horrendous things happen but the equal observation that life continues and that the value of light, beauty and faith remains unchanged.
If there is one contemporary poet who I most clearly see as an influence on my own poetry, it's Zagajewski. I relate profoundly to his vision of things and would aspire to write like him. The curious thing is that, unlike most poets who I consider a major influence on my life and writing, I can't now remember how and where I first encountered him. I did get to go to one of his readings, about five or six years ago at Wilton's Music Hall in east London. It was especially moving when he read 'To Go to Lvov', a very important poem for me which I wrote about here some years ago. I also met him very briefly when he signed a book of his selected poems for me. I thought that he seemed reserved but kind, and when I asked him if he recommended any contemporary Polish poets he suggested Tomasz Różycki (who in my opinion is of the stature of Zagajewski). I dug out the book after I heard that Zagajewski had died, and was touched to discover that he had actually written Różycki's name down for me on a card which I'd kept in the book - probably aware that English speakers tend to find Polish names extremely difficult.
It's so hard to choose a favourite poem by Zagajewski. When I reread them now, years after first readings, they remind me of emotions and moments in my life, and they take me to places which I've visited or which I hope to visit some day. 'Star' has been a talisman for me for many years. 'Vita Contemplativa' occupies a central place of importance in my pantheon of poems, and lines from it often surface in my mind. 'Poetry Searches for Radiance' is a powerful mission statement for poetry. Whether one of his collections, a selected poems or something randomly found online, his works will reward both casual reading and prolonged engagement. What is much harder than finding the right poem by Zagajewski is accepting that he's not here any more.
Be sure to read this powerful essay and personal remembrance on Zagajewski by the poet Ilya Kaminsky: https://yalereview.org/article/going-to-lvov
Photo: "LITERAKTUM 2019-ADAM ZAGAJEWSKI" by DONOSTIA KULTURA is licensed under CC BY-SA 2.0
Posted by Clarissa Aykroyd at 21:00

Add comment
Load more...
Older Post Home
Subscribe to: Post Comments (Atom)
"The Stone and the Star simply IS poetry" (Anthony Wilson)
"The Stone and the Star constantly surprises with new discoveries and reminders of old favourites... Fast becoming a stalwart of the UK poetry blogging scene" (Matthew Stewart, Rogue Strands)
"Clarissa Aykroyd is doing an important thing: a poet writing about poetry, and with a spirit of awed enthusiasm" (Tim Buck, Spectral Lyre)
"Your life, with its immensity and fear,
...now bounded, now immeasurable,
it is alternately stone in you and star."
(from 'Evening', Rainer Maria Rilke,
translated by Stephen Mitchell)