Walking Amongst Poets and Poems in Bulgaria 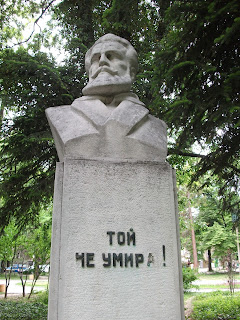 The month of May slipped away at more or less lightning speed – pretty much in a blur, actually – and now I find myself on a visit home to Canada, needing to write about Bulgaria. I have already shared a little of my Bulgarian experience in this entry, where Louis MacNeice and I wandered through towns, over mountains and into internet cafés, but I did have some fairly unexpected poetic moments in Bulgaria which I'd like to describe a little.

I had a great time in Bulgaria, where a friend who has lived there for several years guided me along ancient Roman streets, into beautiful blue and red National Revival houses from the nineteenth century, past spooky, crumbling art nouveau monuments, and to places and moments where I was able to spend time with the Bulgarians themselves. As I mentioned in my poem, I found them hard to read, which I think (among other reasons) can be a legacy of Communist regimes; it's best not to show too much. I found them hospitable and pleased to have a visitor, and the customer service was surprisingly good, but they were anything but transparent.

In poetic terms, Bulgaria gave me a few unexpected gifts. The above photograph is of a monument in Plovdiv to Hristo Botev, still a legend in the modern country; I saw his name graffitied onto at least a few walls. He was both poet and revolutionary, a key figure in the failed April Uprising of 1876 against the Ottoman occupation. The Bulgarian city of Botevgrad is named after him, along with places as far-flung as locations in the Shetland Islands. Botev wrote patriotic, revolutionary and romantic poems. On this monument, as elsewhere, the quotation is from his words: "He who falls while fighting to be free can never die."

As it turned out, my encounters with poetry in Bulgaria turned out to be more international than specifically Bulgarian. Wandering past the lovely houses in Plovdiv's old town, I came across this plaque dedicated to the French poet and politician Lamartine, who had passed through in 1833. Apparently this trip was partial inspiration for his work Voyage en orient: 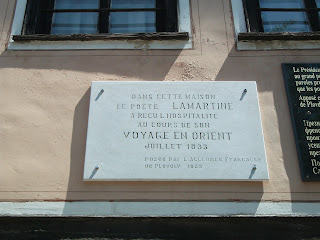 My poetic journey in Sofia was equally unexpected, and actually started in Plovdiv. I went into a bookshop with a decent selection of English-language books, and asked if they had any Bulgarian poetry translated into English. Apparently they didn't, but the staff handed me a little book which at first confused me slightly. I thought it was some sort of anthology, but it turned out to be a guide (in English and Bulgarian) to a project called Wall-To-Wall Poetry, in Sofia. I was quite excited when I realised what it was all about.

Wall-To-Wall Poetry was launched in 2004 by the Dutch Embassy in Sofia, when the Netherlands temporarily held the Presidency of the European Union. The project took about five years to reach completion and involved installations of verses from poems, or short poems, on walls around the city of Sofia – one from each EU country and candidate countries. I'm still not sure why Sofia was chosen for this project, as opposed to another EU country, although it obviously had to do with Bulgaria's entry into the EU around that time. To me it does suggest an enthusiasm for poetry in that city. It was also a wonderful coincidence that I stumbled across this guide while still in Plovidv, because I really spent only half a day in Sofia at the end of my trip, and I could easily have missed the project entirely.

In Sofia, I managed to track down four of the poetry installations. The map inside the guide wasn't exactly stellar, so it took some wandering around and asking directions from locals without much English (and my Bulgarian is non-existent – but they were quite helpful.) I eventually located the installations from Denmark (Piet Hein) and Luxembourg (Raymond Schaak), below – it helped a lot that they were both on the side of the Sofia City Art Gallery: 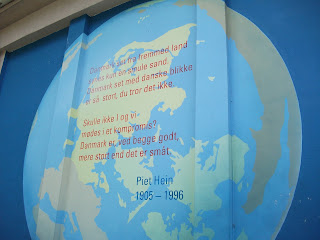 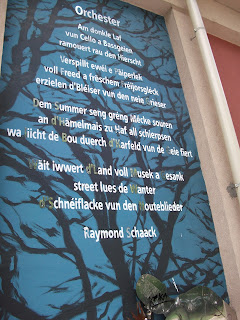 A little later, I came across the Dutch (Jan Hanlo) and Lithuanian (Marcelijus Martinaitis) installations more randomly. The third picture shows the plaque which accompanied the Lithuanian installation and which was reproduced by all the installations. 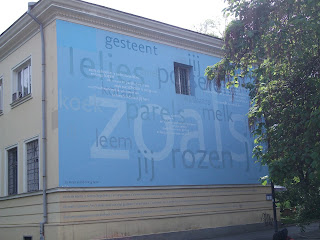 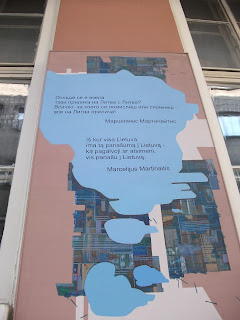 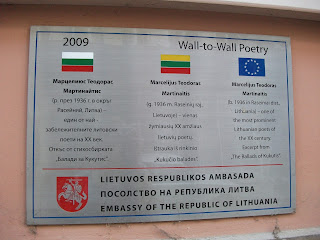 The selections varied pretty widely: Bulgaria's of course featured Hristo Botev, and the Italians also went for an old classic with Dante, but numerous selections were much more modern. Many of them featured verses of poetry specifically about the contributing country, which I could understand, but I tended to prefer those that were more universal. The installations appear on schools, museums, galleries, underground stations, and elsewhere.

I'd really love to see a similar project elsewhere, especially as I have a growing interest in poetry as public art, and I felt quite privileged (and surprised) to have stumbled across this so unexpectedly on my trip, having no idea that it was part of Sofia. However, I did leave the country feeling that I still knew very little more about Bulgarian poetry. Online, I tracked down selections by the poets Konstantin Pavlov and Tsvetanka Elenkova, which can be found on the links below:

While there were moments in these that delighted me, I haven't yet had time to digest them, and I remembered meeting a Bulgarian woman at a poetry reading in London. I told her that I had plans to visit Bulgaria, and it turned out that she was from Plovdiv. I asked her about Bulgarian poetry and she told me that while they had a strong poetic tradition, little of it had been translated – or at least translated well – into English. I'd like to dig further, but in any case I can confirm that the people of Bulgaria live in a country where poetry has left many traces.
Posted by Clarissa Aykroyd at 05:45