Alice Oswald's Nobody at Kings Place, and Anselm Kiefer at White Cube


In the past couple of weeks I went to two events which were either poetry, or poetry-adjacent ("adjacent" is my current overused word) and wanted to write a little about them here.

Alice Oswald, who is definitely "the great Alice Oswald" and is also now the first woman Oxford Professor of Poetry (though not the first to be elected - that was Ruth Padel), performed at Kings Place on 17 January with live music by Ansuman Biswas. Oswald does specifically "perform" rather than "recite" or "read" - even her more conventional appearances involve her almost chanting her poems off by heart, unforgettable performances unlike anyone else's. I have written about seeing her a couple of times before, and this was one of the less conventional appearances. It started with a "sound calendar" or seascape by Chris Watson, and the actual performance was mostly in total darkness, although there was partial lighting for sections of it.

Oswald was performing Nobody, her most recent book, based on stories of water, humans and gods from Greek mythology. I'm only superficially knowledgeable about the Odyssey and related works, so I appreciated Nobody more from a sea-perspective, but the tales that washed in and out sometimes had an odd familiarity. Ansuman Biswas performed on the aquaphone, which reminded me of sea sounds washing into a cave, and also an enormous gong, which was overwhelming to the point of being almost distressing at certain points. The whole performance was mesmerising, thrilling and absolutely haunting.

Last weekend I went to Anselm Kiefer's new exhibition Superstrings, Runes, The Norns, Gordian Knot at White Cube in Bermondsey. I got in just under the wire - the exhibition had been on for a few months but was in its final hours when I went. I was very glad that I did make it, as I've found that Anselm Kiefer is one of the very few contemporary artists who I really connect with. I've written about him on this blog before, as my way into his work was through the poetry of Paul Celan, one of his greatest inspirations (and mine...)

The tangled, broken, cascading canvases and masses of wires weren't quite as enthralling to me as Kiefer's exhibition Walhalla, also at White Cube a few years ago, or the retrospective at the Royal Academy which introduced me to his work - although this was still excellent. This exhibition also seemed a little less poetry-influenced. But poetry was still there: one canvas took inspiration from Georg Trakl, another from the Kalevala, a work which brings together traditional poetry about Finnish mythology. In one of the books accompanying the exhibition, Kiefer referred to Ingeborg Bachmann's poem 'Bohemia Lies By the Sea'.

The painting below, one of the Gordian Knot series which featured axes, seemed slightly more optimistic than most of the other works in the exhibition (which probably tells you something about how "optimistic" it was overall: Kiefer is pretty shattering, almost literally.) I don't quite know what it was - perhaps the colours. I just knew that I felt a slight lifting of the heart. But it also reminded me of Paul Celan's poem 'I hear the axe has flowered'. You can read this poem in full, along with a few others, in translation by Ian Fairley on this link: https://www.guernicamag.com/four_new_translations_of_paul/ 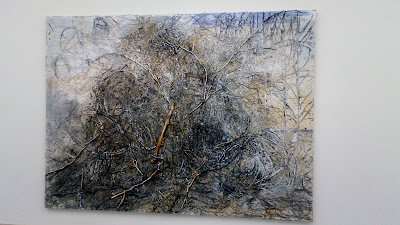 Posted by Clarissa Aykroyd at 22:20