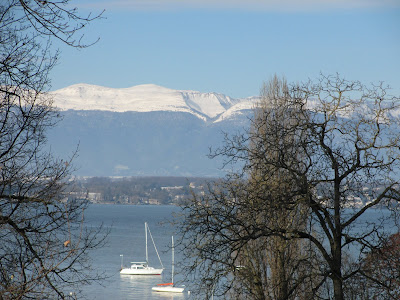 As I've failed to blog more frequently even in the midst of more-time-than-usual-on-my-hands-quarantine (I'm sure many of you can relate), I thought something I could do would be to share one or two (or maybe a few) of my unpublished poems. These are poems which I have faith in, and have probably sent out several times, but which have failed to find a home in journal-world.

I wrote the following poem 'Leaving Basel' while travelling in Switzerland several years ago. I had been staying with a friend in Basel in December and then took the train to Geneva for a quick visit before returning to London. The same trip, which began in Luxembourg, also yielded my poem 'Carousel', which was published in Strange Horizons and which you can read here: http://strangehorizons.com/poetry/carousel/

While I say this is a poem I have faith in, it's also fair to say that I never felt as though I got the ending quite right, and that is perhaps the poem's weakness. On the other hand, I don't feel as though I will ever get any farther with it. And maybe that's ok.


I was trying to explain the snow in terms of the light
as we drove to the station. The border houses slept,
the embassies sang softly and a breath of crystals rose
from their balconies. But I stopped trying
and just looked, because the muted shatter of snow
over the quiet city was not the long slow note of light
on water, and the wild ringing of sailboats
in the wind on Lake Geneva was another way of seeing.

What I learned was this:
we cannot even explain snow in terms of snow,
nor light in terms of light. Then this:
snow stops being here, and light fades. But love goes on,
and elsewhere snow clouds gather, and elsewhere the sun rises.