Kharms: a film about the Russian poet Daniil Kharms 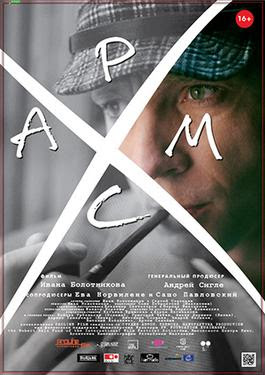 Having a lot of enforced time off over the past surreal, nasty, stressful and boring year has been a mixed experience. The one really good thing about it, for me, has been the opportunity to immerse myself in the Russian language. I had been interested in doing this for a few years already, but when I was first furloughed in the spring I thought that I needed to start using my time. This has meant lessons, apps and discernible progress, though I think my teacher may be about to notice that I have been spending more time listening to Russian rock music and watching Russian films and TV than assiduously studying my grammar and vocabulary. I may say that it's also been nice to discover that I am still capable of learning a new language in adulthood. I learned to speak French as a small child and Spanish as a young teenager, and I haven't tried learning another language until now.
One of the films I have recently enjoyed is Kharms (2017, directed by Ivan Bolotnikov). You can watch it on the Kino Klassika Foundation website here, and the link also includes some very nice programme notes: https://www.kinoklassikafoundation.org/project/kharms/
You can watch this for free for just a few days, until Tuesday 26 January at 12 noon GMT. I think it may only be available in the UK due to rights issues, but you can always check to see if it's available in your territory.
Kharms is a film about the life of the surrealist Soviet-era poet Daniil Kharms. I was only vaguely aware of this poet, partly because he loved Sherlock Holmes and used to smoke a calabash pipe. 'Kharms' was a pen name and may be a reference to the Russian pronunciation of 'Holmes'. This was noted in the film by the poet's sartorial choices and one subtle joke.
The film isn't a strict biography; it celebrates the poet's work, his life in the beautiful city of St Petersburg/Leningrad, his friendships and romances. Colour and black-and-white film, static and moving shots combine to create a wistful and quirky view of different eras and events. The tragedy of Kharms' death by starvation during the siege of Leningrad is also part of the film.
Currently, Kino Klassika are sharing weekly broadcasts of Soviet, Russian, Caucasian and Eastern European films, but they are about to launch a dedicated online streaming platform of such films, called Klassiki. Given the centrality of poetry in Russian culture, I suspect there will be more tie-ins to poetry in the future.
Posted by Clarissa Aykroyd at 19:37